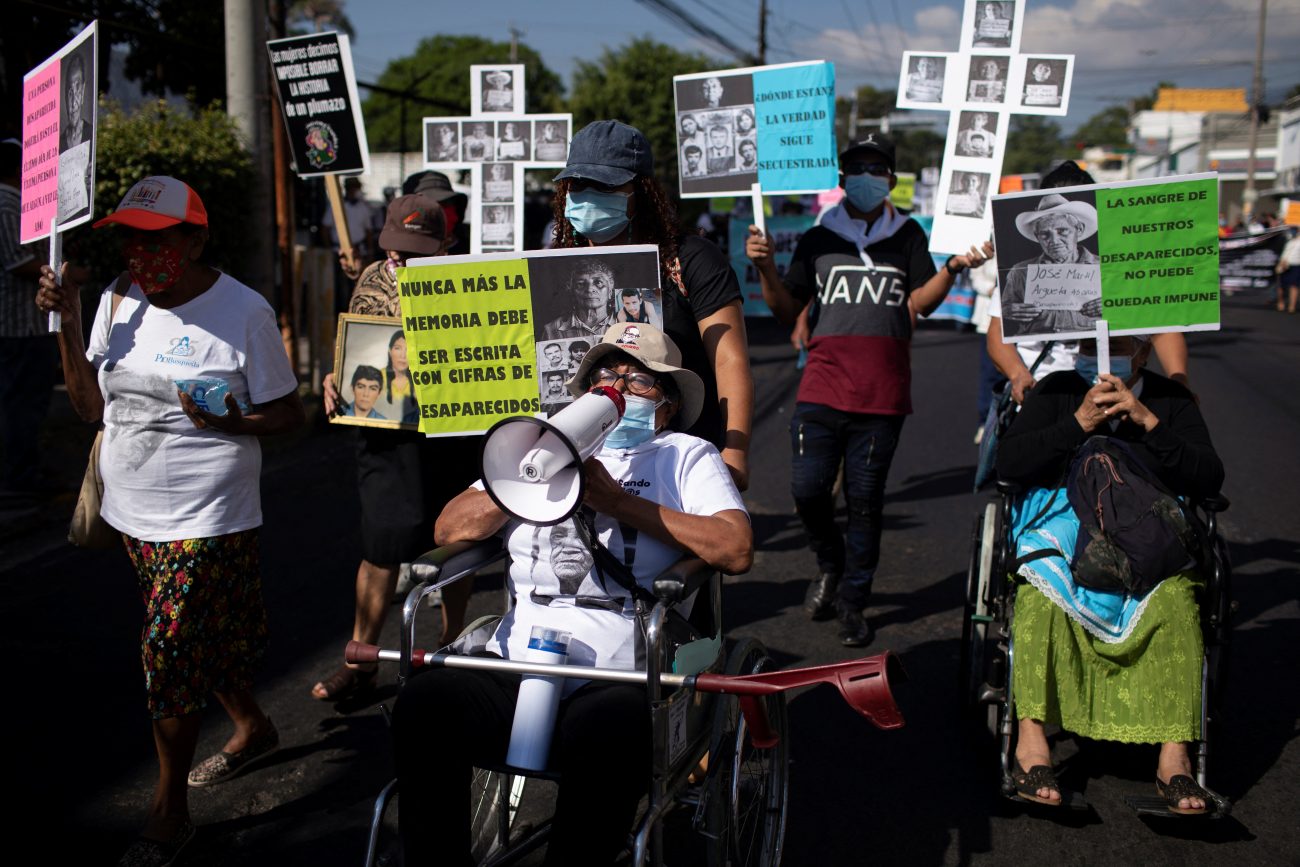 Relatives of civil war victims commemorate the 30th anniversary of the signing of the peace accords that ended the war, in San Salvador, El Salvador, Jan. 16, 2022. Cardinal Gregorio Rosa Chavez said citizens had a right to celebrate and called the government's actions of roadblocks and car searches for people en route to the commemoration "not normal." (CNS photo/Jose Cabezas, Reuters) 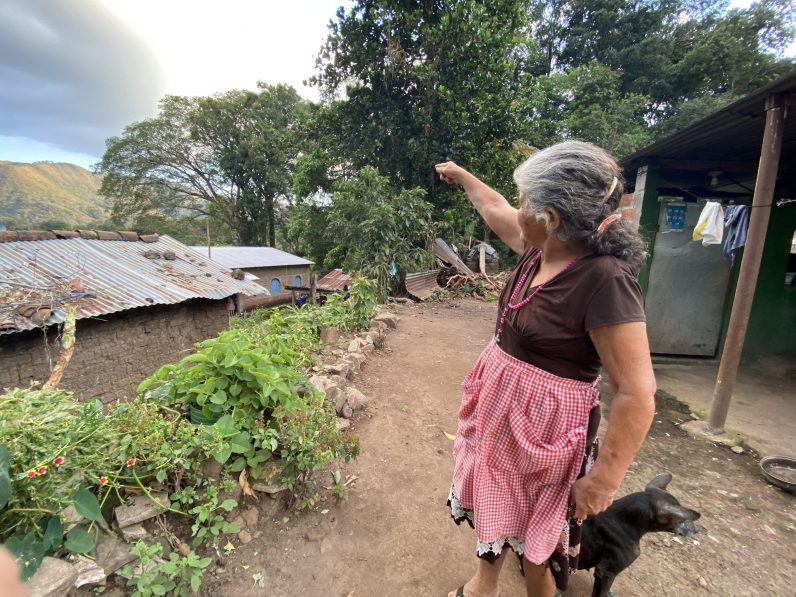 Feliz Maria Guardado of Los Calles, El Salvador, points to the spot where her brother was dragged to his death by soldiers in 1982. She said on Jan. 16, 2022, she would celebrate the anniversary of the 1992 peace accords, which ended El Salvador’s 12-year civil war. (CNS photo/Rhina Guidos)

SAN SALVADOR, El Salvador (CNS) — Feliz Maria Guardado walked near a ledge close to her home in the village of Los Calles Jan. 15 and pointed to a dirt road where townsfolk say they saw her brother, who couldn’t walk, dragged to his death by soldiers in 1982.

That same year, two years officially into a civil war in El Salvador, her elderly father fell to his death as the family began running from soldiers, looking for a place to hide in the mountains nearby. The patriarch lost his footing on a curb and his wife watched him fall off a mountain.

“We suffered great torment,” Guardado, now in her 70s, told Catholic News Service Jan. 15. “If we didn’t run, they would have killed us all.”

The following day she celebrated the 30th anniversary of the signing of peace accords. The accords — signed Jan. 16, 1992 — put an end to 12 years of civil war that left tens of thousands of civilians dead, including the country’s martyred St. Oscar Romero and four Salvadoran Catholics who will be beatified Jan. 22.

Guardado said that, encouraged by her local bishop to give thanks for the big and small things about not living in a war, she wanted to celebrate not having to run for her life anymore.

“We want peace in all of El Salvador,” Guardado said, adding that in Los Calles, “we pray, I pray, to the Blessed Sacrament each day to bring us peace, even though I’ll probably never see it, but that is our faith.”

While those who lived through the conflict like Guardado were marking the day, Salvadoran President Nayib Bukele and the ruling Nuevas Ideas party in Congress, which he founded, said they would not observe the milestone.

“Far from representing a benefit for the Salvadoran people, they (the peace accords) constituted the beginning of an era of corruption,” the majority of the Salvadoran general assembly said in a decree, adding they would celebrate instead “a day for the victims of the conflict.”

Though peace seems to be elusive for El Salvador, which has suffered from rampant gang violence following the war, the accords put an end to the kind of violence the 1970s and 1980s generated based on political differences. Back then, conflict between left-leaning rebels and a right-wing government produced death squads as well as guerrilla armies, whose encounters terrorized civilians like Guardado.

If either group suspected a civilian’s involvement with the other, death soon would follow.

The accords, aside from forcing armed groups to put down their weapons, also changed the role of the military, which had taken part in atrocities ordered by those in power, and instead reimagined a new role for it as an institution to protect the populace, not harm it. The accords also established a national office to handle human rights violations and instituted a multiparty system, opening the way to a fledging democracy for El Salvador.

Today, some, including the U.S., see all of that in peril.

Seeming to align with China, which has set its strategic eye on Central America, the Salvadoran president seems to be is stepping away from friendly relations with the United States, even as more than 2 million Salvadorans live in the U.S. and more are trying to enter each day.

Some of the rancor comes from the U.S. calling out officials in Bukele’s government for corruption, revoking their visas to the U.S.

Bukele, in turn, has accused the U.S. government of paying his opponents to fuel opposition against him, including the thousands who attended a march to celebrate the peace accords in San Salvador Jan. 16.

Prior to the march, Salvadoran authorities were combing buses and set up checkpoints to deter those heading into San Salvador for the event.

During his Jan. 16 homily at St. Francis Church in San Salvador that day, Cardinal Gregorio Rosa Chavez, who participated in the accords as a member of the Catholic Church, said he’d received messages about people being prevented from attending.

“They were being asked (by authorities) ‘Where are you going and what are you going to do?’ How sad, right? We have a right to assemble peacefully. … It’s impossible to see this as normal,” he said. “We have a right to have our say. We’re free citizens, and all we want is a country where people (can say) they’re happy to live here, where it’s a home for all, where we can all live as brothers and sisters and not as enemies.”

The Sunday Gospel, describing a party at Cana, where Jesus turns water into wine for guests at a wedding celebration, is a “beautiful coincidence,” the cardinal said, as Catholic El Salvador finds itself in a celebratory mood because of four upcoming beatifications Jan. 22 as well as the milestone anniversary of the accords. 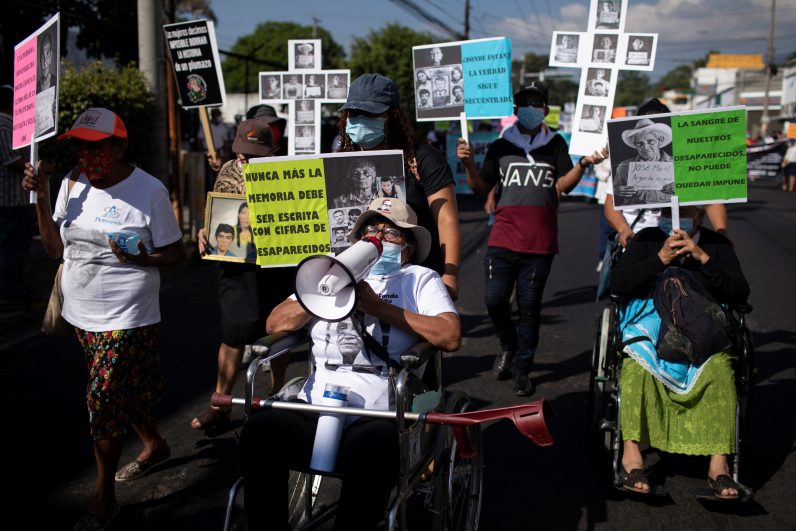 Relatives of civil war victims commemorate the 30th anniversary of the signing of the peace accords that ended the war, in San Salvador, El Salvador, Jan. 16, 2022. Cardinal Gregorio Rosa Chavez said citizens had a right to celebrate and called the government’s actions of roadblocks and car searches for people en route to the commemoration “not normal.” (CNS photo/Jose Cabezas, Reuters)

NEXT: China region hosting Olympics has history of Catholic persecution