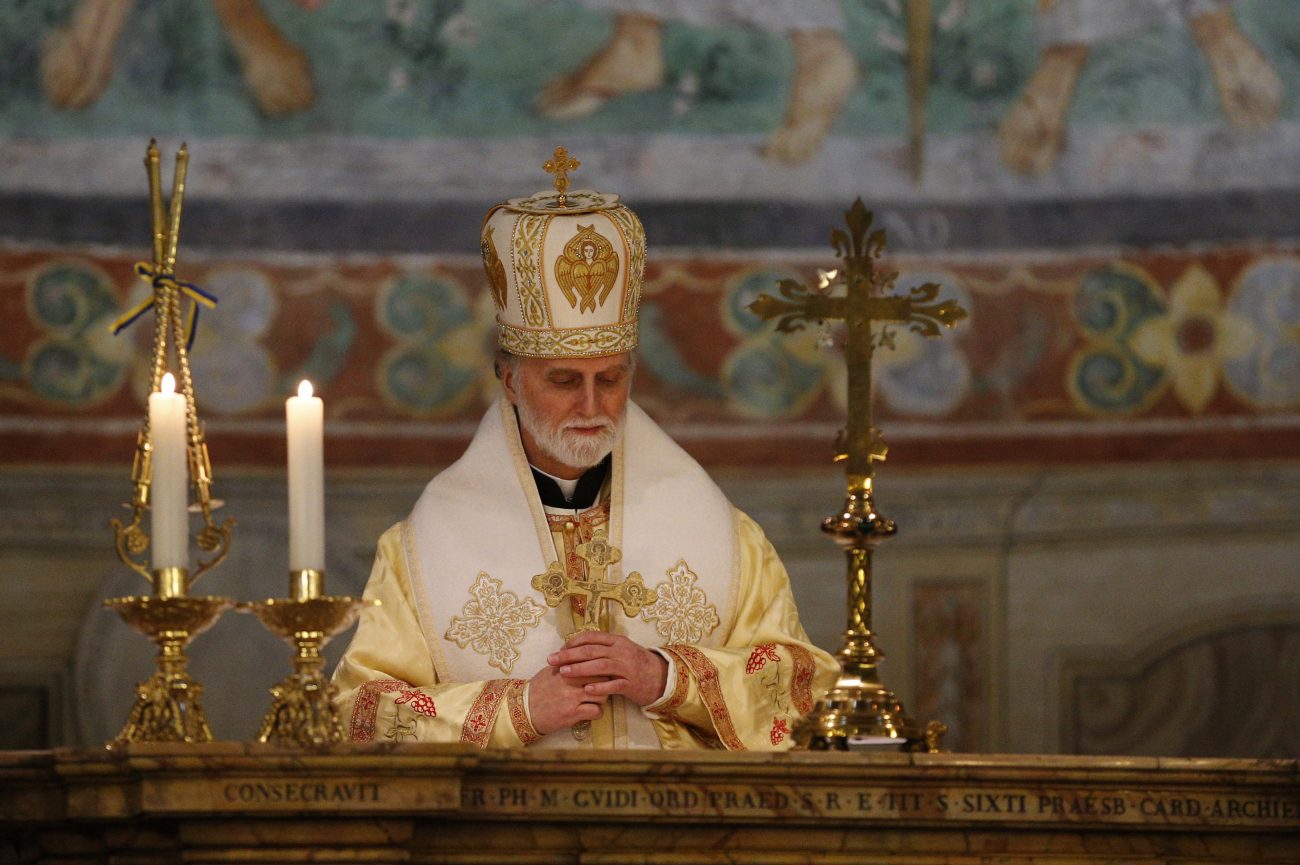 Archbishop Borys A. Gudziak of the Ukrainian Archeparchy of Philadelphia concelebrates a Divine Liturgy with bishops of the Eastern Catholic churches in the United States at the Basilica of St. Clement in Rome Feb. 21, 2020. The bishops were making their "ad limina" visits to the Vatican. (CNS photo/Paul Haring)

VATICAN CITY (CNS) — Saying he was worried about Ukraine and how a possible Russian-Ukrainian conflict could spread, Pope Francis proclaimed Jan. 26 as a day of prayer for peace in Ukraine.

Responding to a buildup of Russian troops near the Ukrainian-Russian border and the inability of major powers to agree on a solution, Catholic bishops in Ukraine and Poland and Ukrainian Catholic bishops in the United States also called for prayers for the prevention of war.

After reciting the Angelus prayer Jan. 23, Pope Francis said, “I am following with concern the rising tensions that threaten to strike a new blow at peace in Ukraine and put into question the security of the European continent, with even wider repercussions.”

“I make a heartfelt appeal to all people of goodwill to pray to Almighty God that all political actions and initiatives will serve human fraternity rather than partisan interests,” the pope said.

“Those who pursue their own goals to the detriment of others despise their vocation as human beings, because we have all been created brothers and sisters,” he said. “For this reason and with concern given the current tensions, I propose that next Wednesday, Jan. 26, be a day of prayer for peace.”

Ukrainian Catholic bishops in the U.S. asked Catholics to pray, be informed, and donate to help those affected by Ukraine’s humanitarian crisis. “People near the front line often lack the basics — clean water, food, clothes, medicine,” they said.

They compared Russian buildup of troops to King Herod’s thirst for power and hegemony.

“This is a question of life and death, as nostalgia for an empire lost has led to senseless slaughter and immense suffering throughout Ukraine,” said the Jan. 22 statement signed by all five Ukrainian Catholic bishops in the United States.

“The war in Ukraine is real. It kills, maims and destroys daily. An escalated Russian invasion will generate additional millions of refugees, more dead and injured, more tears and pain. Still, the people of Ukraine courageously endure. As they stand with a gun to their head, they ask for our solidarity,” they said.

In a statement Jan. 24, Catholic bishops in Ukraine and Poland cited former popes, papal encyclicals and the Catechism of the Catholic Church to show Catholic teaching that war is never the answer to problems.

“The current situation represents a great danger for the countries of Central and Eastern Europe and the entire European continent, which may destroy the progress made so far by many generations in building a peaceful order and unity in Europe,” said the joint statement.

“We call upon those in power to refrain from hostilities. We encourage leaders to immediately withdraw from the path of ultimatums and the use of other countries as bargaining chips. Differences in interests must be resolved not by the use of arms, but through agreements,” they said.

They included a prayer from St. John Paul II that said, in part: “Hear the cry of all your children, the anguished plea of all humanity. Let there be no more war — an evil adventure from which there is no turning back; let there be no more war — a maelstrom of struggle and violence. Grant that the war … which threatens your creatures in heaven, on earth, and at sea may cease.”

Russia annexed Crimea in early 2014 and, shortly afterward, Russian-backed separatists began fighting Ukrainian government forces in the eastern Ukrainian regions of Donetsk and Luhansk. Some 1.5 million people have fled the region to other parts of Ukraine and thousands of civilians and soldiers have died or been injured.

While in the spring of 2021 Russia was accused by many Western nations of trying to provoke more active fighting by holding military exercises near the border, a massive Russian buildup of troops just over the border created alarm in early December. The buildup has continued and, late Jan. 22, Britain’s Foreign and Commonwealth Office released a statement saying it had evidence that Russia was developing plans to install a pro-Russian government in Ukraine. 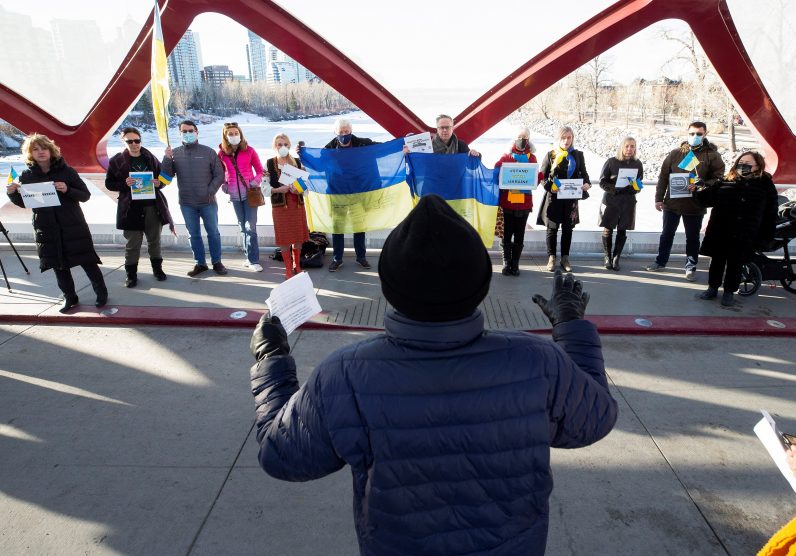 Supporters of Ukrainian sovereignty hold a protest on the Peace Bridge in Calgary, Alberta, Jan. 22, 2022. Pope Francis at his Jan. 23 Sunday Angelus said he is deeply concerned by growing tensions between Russia and Ukraine and called for a day of prayer for peace Jan. 26. (CNS photo/Todd Korol, Reuters)

PREVIOUS: Pope declares St. Irenaeus a doctor of the church