Christ is at ‘the heart of Catholic education,’ says archbishop 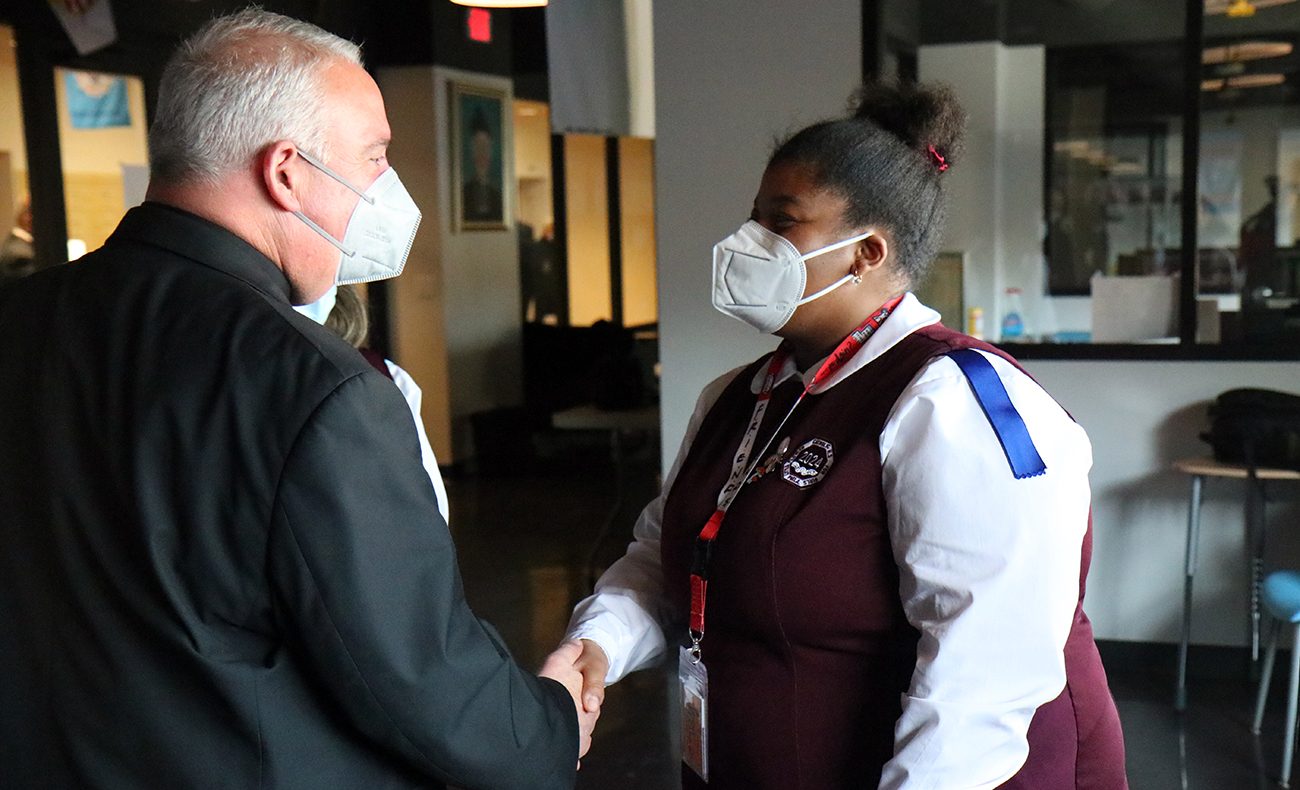 Christ is at the heart of Catholic education, and encountering him is the ultimate learning outcome, said Archbishop Nelson Pérez at the kick-off of National Catholic Schools Week (Jan. 30-Feb. 5) in the Philadelphia Archdiocese.

The archbishop shared his insights during a Jan. 31 Mass at Father Judge High School in Northeast Philadelphia, where he was joined by some 800 students, educators and clergy, as well as Nancy Kurtz, interim superintendent of archdiocesan secondary schools; Irene Horstmann Hannan, CEO of the Faith in the Future Foundation; and several Father Judge board members and benefactors.

The liturgy also marked the start of the high school’s special jubilee year honoring the 400th anniversary of the death of its patron, St. Francis de Sales.

Born in France’s Savoy region in 1567, the “Gentleman Saint” is revered for his sound spiritual directives encouraging faithful to pursue true devotion to God according to their various states in life. De Sales’ numerous writings are marked by a keen understanding of the human personality, and a joyful assurance that holiness, manifested through daily acts of kindness and charity, is possible for all.

Among the 20 concelebrants at Monday’s Mass were 13 priests of the Oblates of St. Francis de Sales, whose religious order has “brought the teachings and spirit” of its patron to Father Judge since the school’s founding in 1954, said assistant athletic director and Oblate Brother James Williams.

The Oblates “have touched the lives of so many men here at (Father) Judge and taught them the things of the heart,” said Archbishop Pérez.

And that is exactly the core mission of Catholic education, he said. 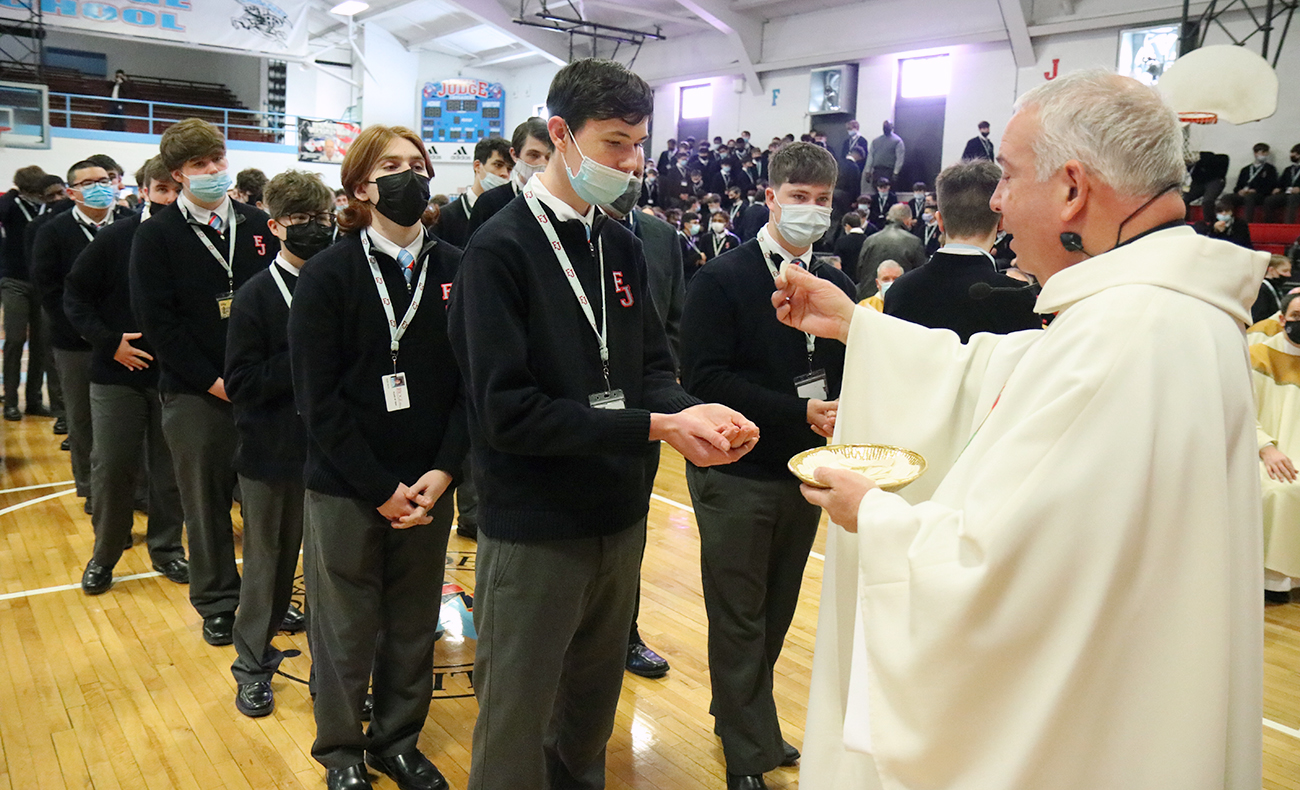 “You come here and learn all sorts of things, all sorts of topics and subjects,” he said. “But in the end, you learn the things of the heart. And deep inside our hearts lies the very presence of Christ.”

Amid the various career and personal choices graduates will face, “what matters at the end of the journey is (what) … you are learning here, the things of Christ and his love for you and his care for you,” said the archbishop. “And that’s what makes a Catholic school special.”

Though challenging at times, prayer — through which the soul and Christ meet — “will carry you through the ups and downs of life,” he said, noting “St. Francis de Sales showed us how to pray.”

The archbishop admitted when battling distractions in prayer, he took solace in the saint’s advice to simply “do nothing” before the Lord and instead “let yourself be seen” – a maxim painted by liturgical artist and Oblate Brother Mickey McGrath, who was on hand for the Mass.

Prayer should be infused with gratitude, which is “at the heart of the Christian soul,” said Archbishop Pérez, who urged students to thank their parents for the many sacrifices they made for their children.

At the conclusion of the Mass, Archbishop Pérez was presented with a statue of St. Francis of de Sales, a replica of a life-sized bronze image created by Delaware-based sculptor Brad Vanneman on display at the Salesianum School in Wilmington.

In addition, the archbishop received a framed metal image of the Father Judge Crusader mascot, handcrafted by students of the school’s welding program, part of the Father Brisson Academic Excellence Center and a first-of-its-kind among archdiocesan high schools.

Launched during the 2019-2020 academic year, the welding track is key to the school’s overall Career and Teachnical Education (CTE) initiative, which over the next five years is projected to include coursework in biotechnology, business, construction trades, culinary arts engineering and entrepreneurship.

Catholic education continues to evolve, even as it remains “rooted in Christ,” said the archbishop, who followed up his tour by meeting with several archdiocesan high school students in a town hall format in the Father Brisson Center.

Among a range of topics he discussed with participants – drawn from Archbishop Ryan, Little Flower, St. Hubert and Father Judge High Schools – the archbishop emphasized Catholic education, like the faith that shapes it, ultimately produces “joy” and the ability to “make good choices.”

St. John Neumann, fourth bishop of Philadelphia, “brought together a group of people when Catholic schools didn’t exist and (created) this ministry of education,” said Archbishop Pérez. “That was a gift we gave to the world.”

PREVIOUS: Catholic education ‘a gift to the world,’ archbishop says at St. Monica’s