‘Hearts of church in Philadelphia go out to Ukraine’ at liturgies, prayer gatherings 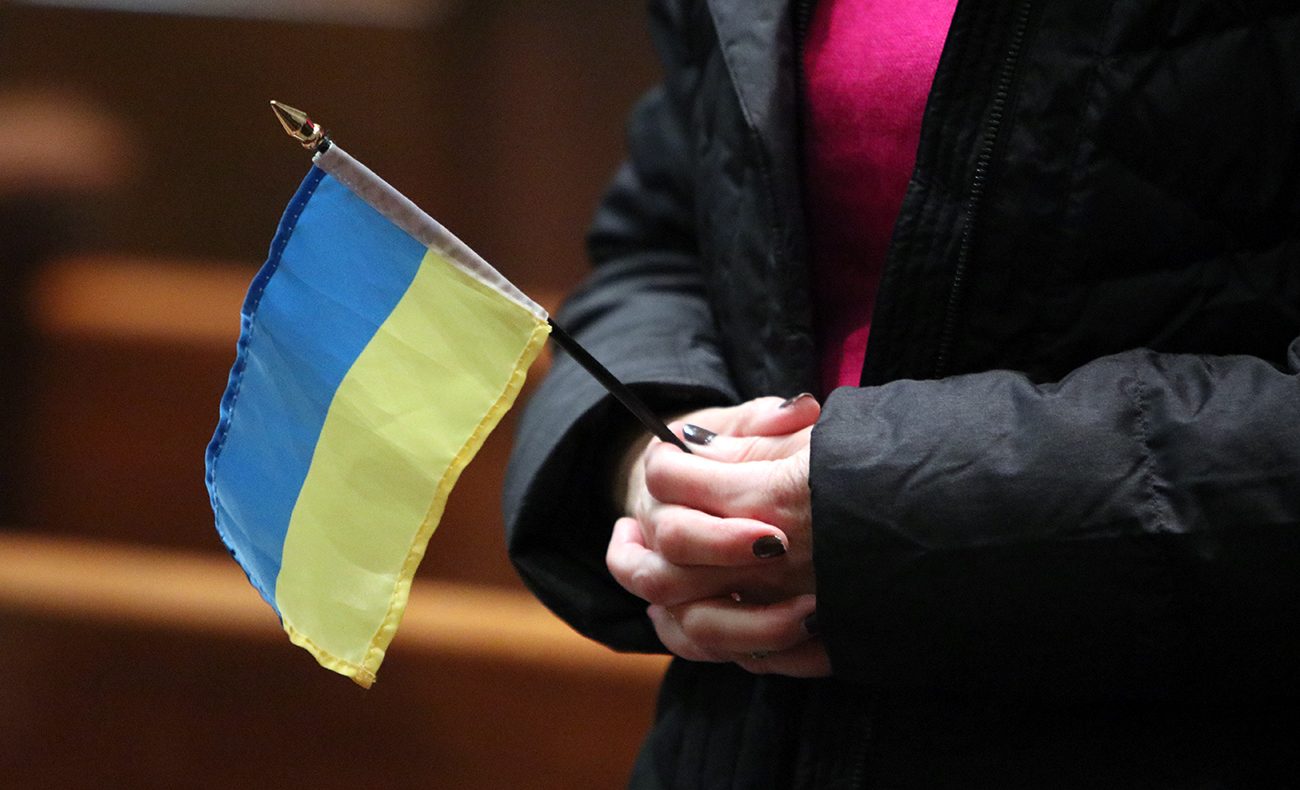 Lilia Bokarev holds the flag of her native Ukraine during a Feb. 27 Mass celebrated by Archbishop Nelson Pérez for that nation at the Cathedral Basilica of SS. Peter and Paul. (Sarah Webb)

As Russian forces continue to attack Ukraine on multiple fronts, people from several faith communities gathered this past weekend to pray for peace.

On Feb. 27, Archbishop Nelson Pérez celebrated the scheduled 11 a.m. Sunday Mass at the Cathedral Basilica of SS. Peter and Paul for Ukraine.

That same morning, Archbishop Borys Gudziak, head of the Ukrainian Catholic Archeparchy in Philadelphia, urged prayer, awareness and humanitarian aid for Ukraine in his homilies at the Cathedral of the Immaculate Conception in the city’s Northern Liberties section.

“Miracles are possible,” said Archbishop Gudziak, who had returned just hours earlier from a series of ecclesiastical and diplomatic meetings in Ukraine, Rome and Paris.

On Sunday afternoon, both archbishops joined Reverend Glenn McDowell, pastor of Liberti River Wards Church; Rabbi David Straus, senior rabbi at Main Line Reform Temple in Wynnewood; and other members from the Religious Leaders Council and Interfaith Philadelphia for vespers at the Cathedral of the Immaculate Conception.

Attended by some 130, the service — and the liturgies that had earlier preceded it — coincided with “Forgiveness Sunday,” which Eastern Catholic and Orthodox traditions mark just before Lent. The observance, which invites faithful to seek reconciliation with God and with one another, took on new meaning amid the Russian invasion of Ukraine. 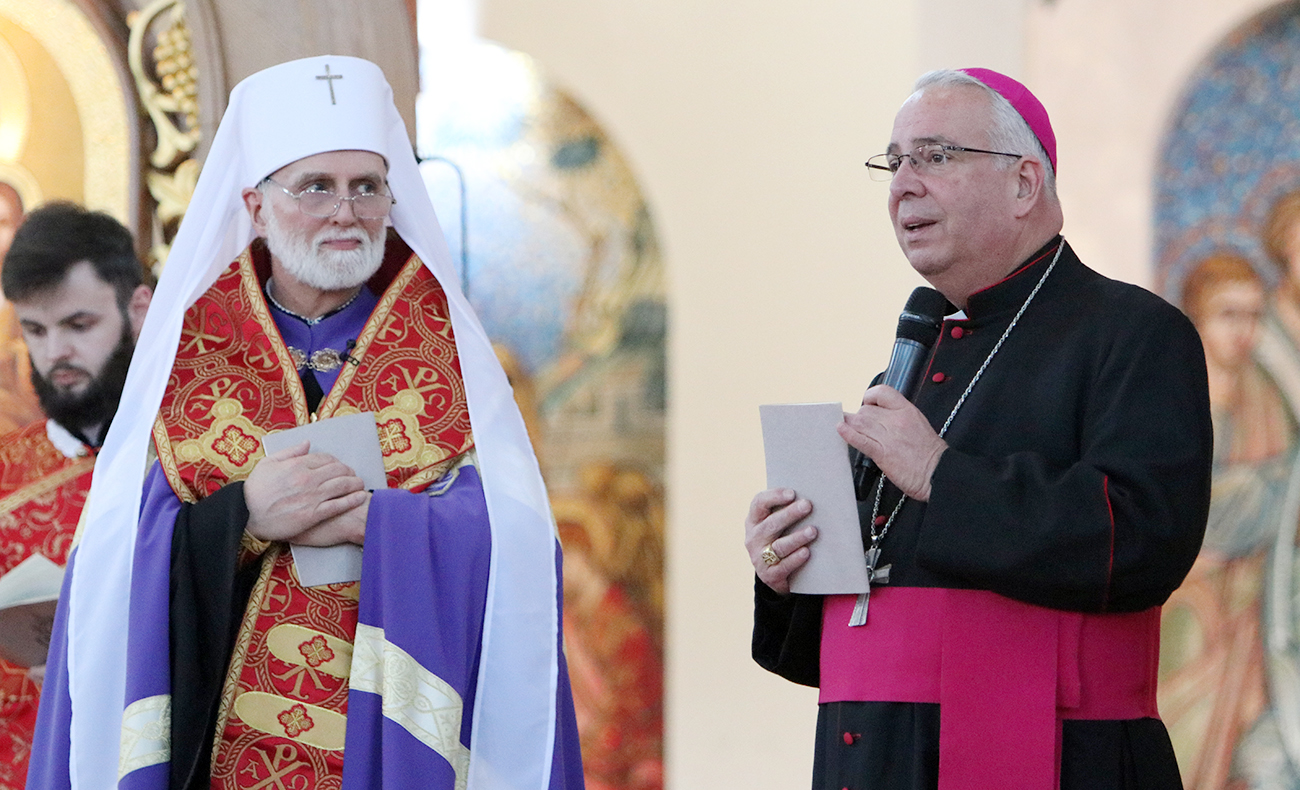 “That is the dilemma … how to find the courage to forgive your enemy,” said Father Roman Pitula, rector of the Cathedral of the Immaculate Conception, in his homily at the Feb. 26 vigil liturgy. “That’s what Jesus asks us to do. … It’s easy to talk about when there is peace, when everything is normal. … How can I forgive (when) people are going to shelter in subways … when babies are being born in subways instead of hospitals, because the hospitals are destroyed? How can I forgive when … children are killed (and) … kindergartens are shelled, bombed and destroyed?”

The attacks have driven more than 500,000 refugees to flee Ukraine, a number the United Nations estimates could quickly total four million.

Others remain trapped in Ukraine, including Father Volodymyr Radko, a graduate of St. Charles Borromeo Seminary in Wynnewood. The Ukrainian native, ordained only two weeks ago by Archbishop Gudziak in Lviv, is currently unable to return to his U.S. priestly assignment due to massive delays at Ukraine’s borders.

“He spent a night and half a day at the Polish border, trying to get home to you,” Archbishop Gudziak advised the congregation. “He walked 10 miles to the border, passing cars full of families with small children, breastfed babies. Some of these families were walking because there was a 10-mile pileup of cars heading toward the Polish border.” 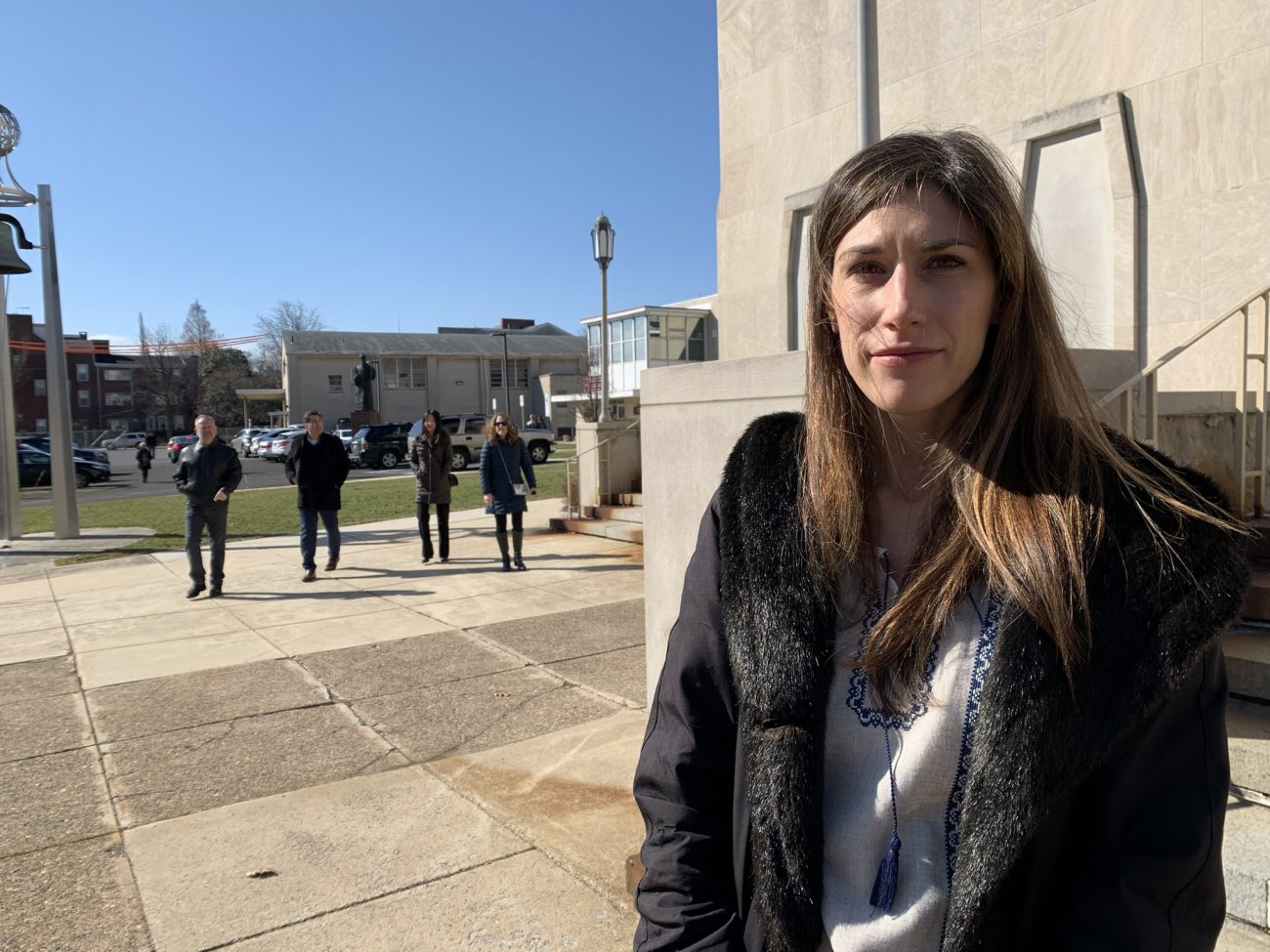 Alexandra Kuzyk, a native of Ukraine, said after a Feb. 27 liturgy at the Ukrainian Catholic Cathedral of the Immaculate Conception in Philadelphia that Ukrainians “need everything that we can give them” as they battle a Russian invasion. (Gina Christian)

Yet “we cannot overcome evil with evil,” said Father Pitula, but only “by goodness, by kindness.”

He added that practice extends even to Russian President Vladmir Putin, who last week ordered the invasion of Ukraine just eight years after annexing its Crimean Peninsula and backing Russian separatists in its Donetsk and Luhansk regions.

While “Ukraine needs to defend itself,” Archbishop Gudziak said he also prays “for the conversion of Vladimir Putin.”

Lent itself, which begins today for Ukrainian Catholics, reminds faithful they are “created to live forever with God,” not to “grab onto the treasure that is not eternal: our little passions, our little kingdoms, our little ambitions,” said Archbishop Gudziak.

Referencing the day’s Gospel passage (Lk 6:39-45), in which Jesus instructs his disciples that a tree is known by its fruit, Archbishop Pérez said the crisis in Ukraine shows “what happens when a tree is not planted and rooted in a good place … and it’s bringing incredible consequences to mankind.”

The “ultimate place” to be rooted is in Christ, he said.

Mikhail and Lilia Bokarev, parishioners of St. Michael the Archangel Ukrainian Catholic Church in Jenkintown, are striving to do just that, even as loved ones in Ukraine seek cover from Russian attacks.

Traveling to the 11 a.m. Mass celebrated by Archbishop Pérez, Mikhail Bokarev said he tried to call a friend who “was on the way to bomb shelter” as air sirens rang out.

“We hope this is all going to end soon,” he said. “We give thanks for the prayers and the support.”

Lilia Bokarev said she “tried to text relatives in Kyiv” that morning, but “they didn’t respond. Yesterday they said they were OK. Today, I don’t know.”

Ukrainian native Alexandra Kuzyk, who along with her husband attended a 9 a.m. liturgy at the Cathedral of the Immaculate Conception, admitted she is “overwhelmed by what’s going on” there now.

“We know that the people there need everything we can give them – our support, our prayers, everything,” she said.

For that reason, Terry Guerra, a member of St. John the Evangelist Parish and a secular Franciscan, also attended the same liturgy at the Cathedral of the Immaculate Conception.

Images of Ukrainian resistance to the Russian reminded Guerra of the 1986 People Power Revolution in her native Philippines, when after some two decades of corruption and brutality, authoritarian ruler Ferdinand Marcos and his wife Imelda were overthrown by more than a million protesting Filipinos.

“I lived through it, right before I came to the U.S.,” said Guerra, wiping away tears after the liturgy. “I am in solidarity with Ukraine.”