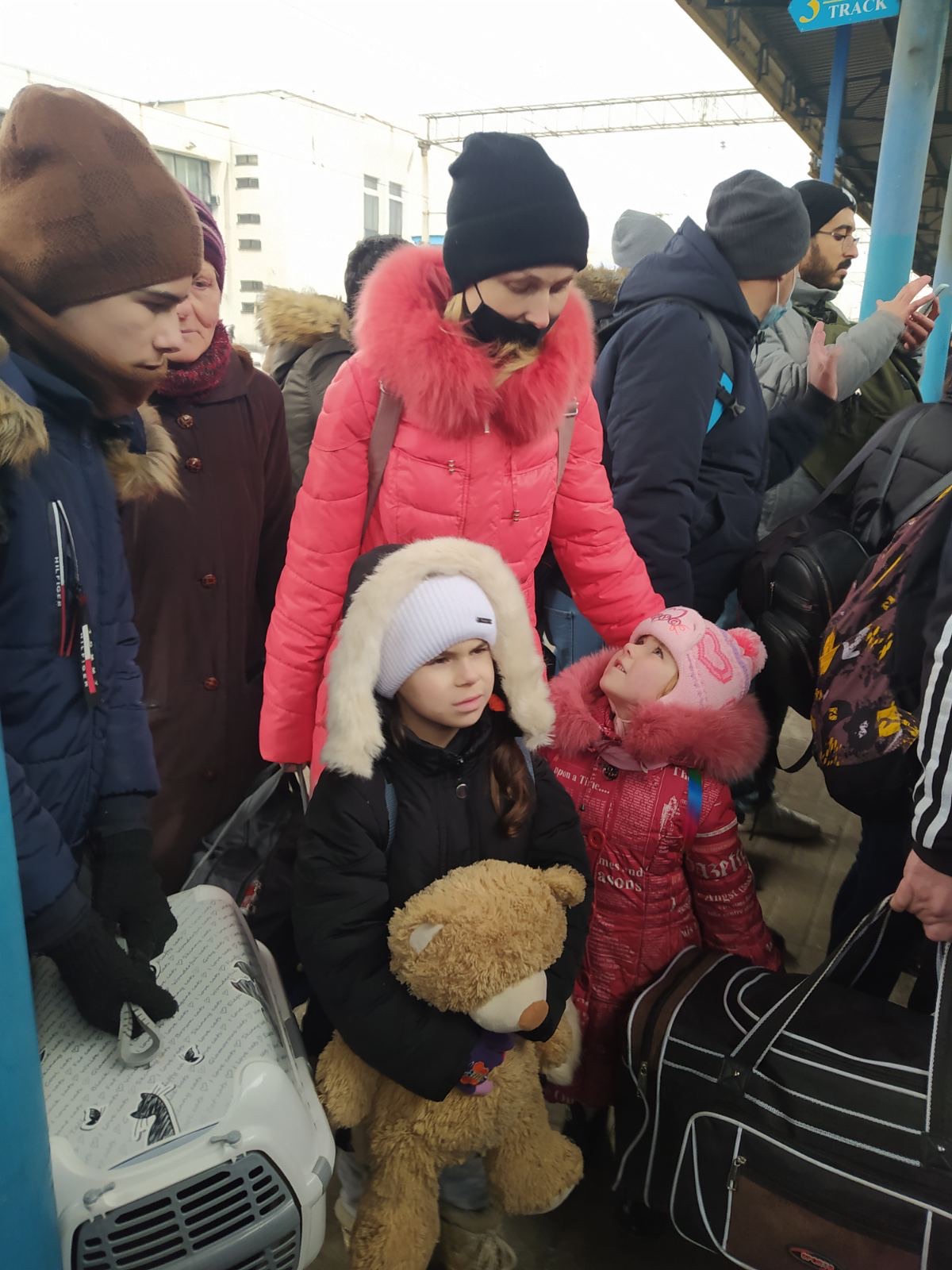 A family boards a train in Zaporizhzhia to flee the Russian invasion of Ukraine, Feb. 26. The United Nations estimates some 4 million Ukrainians may seek evacuate the nation. (Sister Lucia Murashko, OSBM)

Women religious in the eastern part of Ukraine are aiding civilians fleeing the ongoing Russian invasion.

“We helped evacuate three families today, one of them with a child with a severe disability,” said Basilian Sister Lucia Murashko, whose convent, the monastery of SS. Peter and Paul in Zaporizhzhia, is located about 125 miles from Donetsk.

The United Nations has stated that close to 120,000 Ukrainians had already left the nation as of Feb. 26, with up to 4 million expected in a worst-case scenario. Authorities in Poland, Moldova, Slovakia, Hungary and Romania have mobilized to provide refugees with humanitarian assistance.

But getting Ukrainians to those countries is a challenge amid a situation Shabia Mantoo, the spokeswoman of the U.N. High Commissioner for Refugees, described as “very fluid and changing by the hour.”

“There were so many people who did not manage to get to the train,” said Sister Lucia, who communicated directly with CatholicPhilly.com Feb. 26 via the messaging app Viber. “The train was already packed with so many people. So they can’t find a place to sit.”

If they manage to board the trains, passengers still face a journey of “22 to 23 hours” from Zaporizhzhia to Lviv, she said.

Yesterday, the sisters at SS. Peter and Paul “found a car for two families so they can travel to the west,” said Sister Lucia.

Their work continues amid a constant threat of air attacks, she said.

“People her are afraid of the bombing,” said Sister Lucia. “During the day we have to stay in basements. While there (are) air alarms at night, we are limited to walk on the streets.”

In a Feb. 24 call with CatholicPhilly.com, Sister Lucia said amid the chaos she and her fellow sisters “feel very calm” through a “special grace of God.”

“We feel peace here,” she said. “We do not want to move from here; we want to help people and stay with them as long and as much as we can.”

A recent pilgrimage of men and women religious, which concluded in eastern Ukraine just hours ahead of the invasion, has provided renewed spiritual energy for the days ahead, said Sister Lucia.

“We were walking on the main street (of the town) and the people were crossing themselves … and making bows to the crucifix,” she said. “They came to us and gave us strength to serve and to be and to continue our mission here, so we cannot want to go anywhere else.” 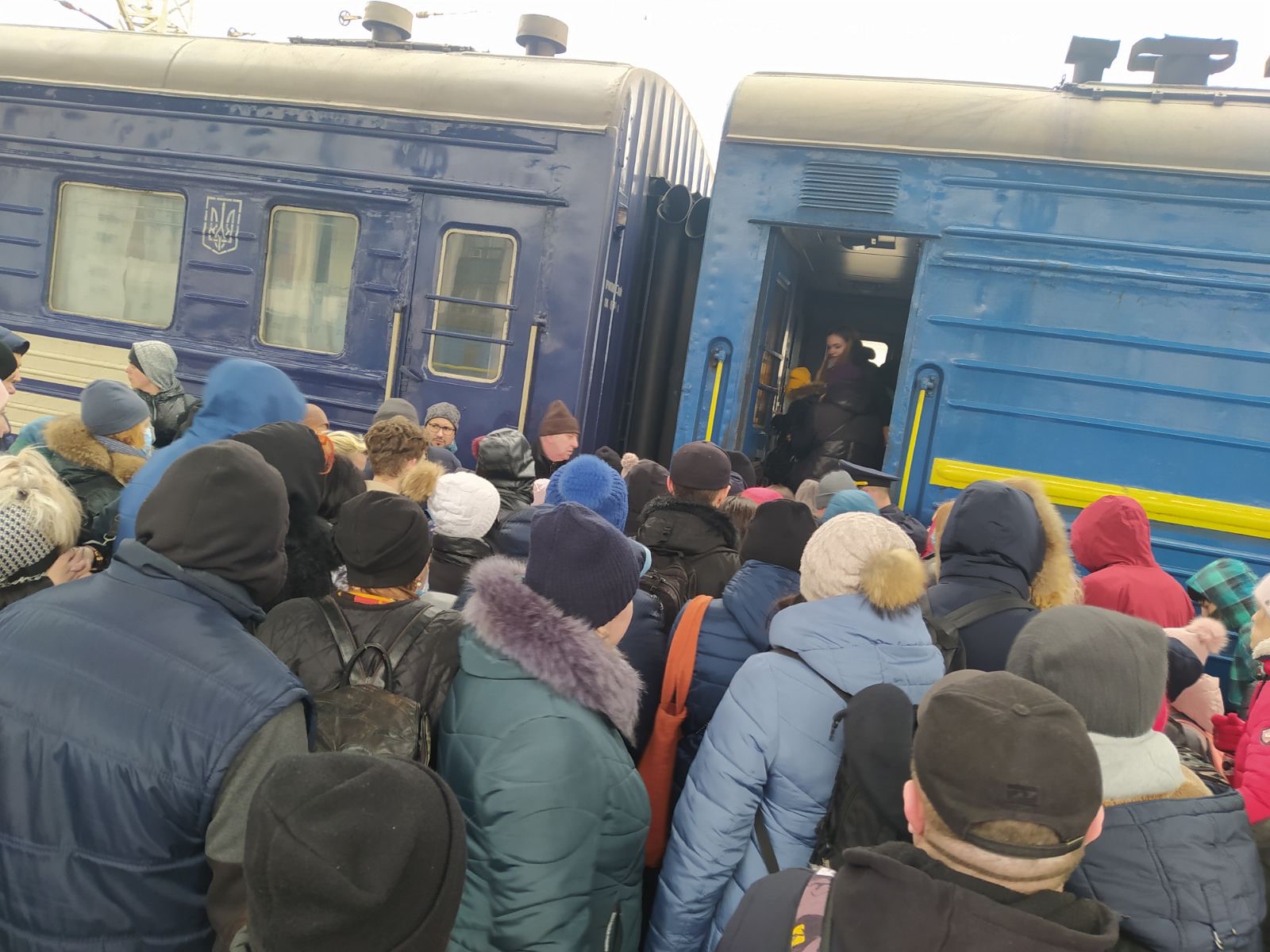 Civilians fleeing the Russian invasion of Ukraine seek to board a train at Zaporizhzhia, Feb. 26. (Sister Lucia Murashko, OSBM)

NEXT: ‘Hearts of church in Philadelphia go out to Ukraine’ at liturgies, prayer gatherings