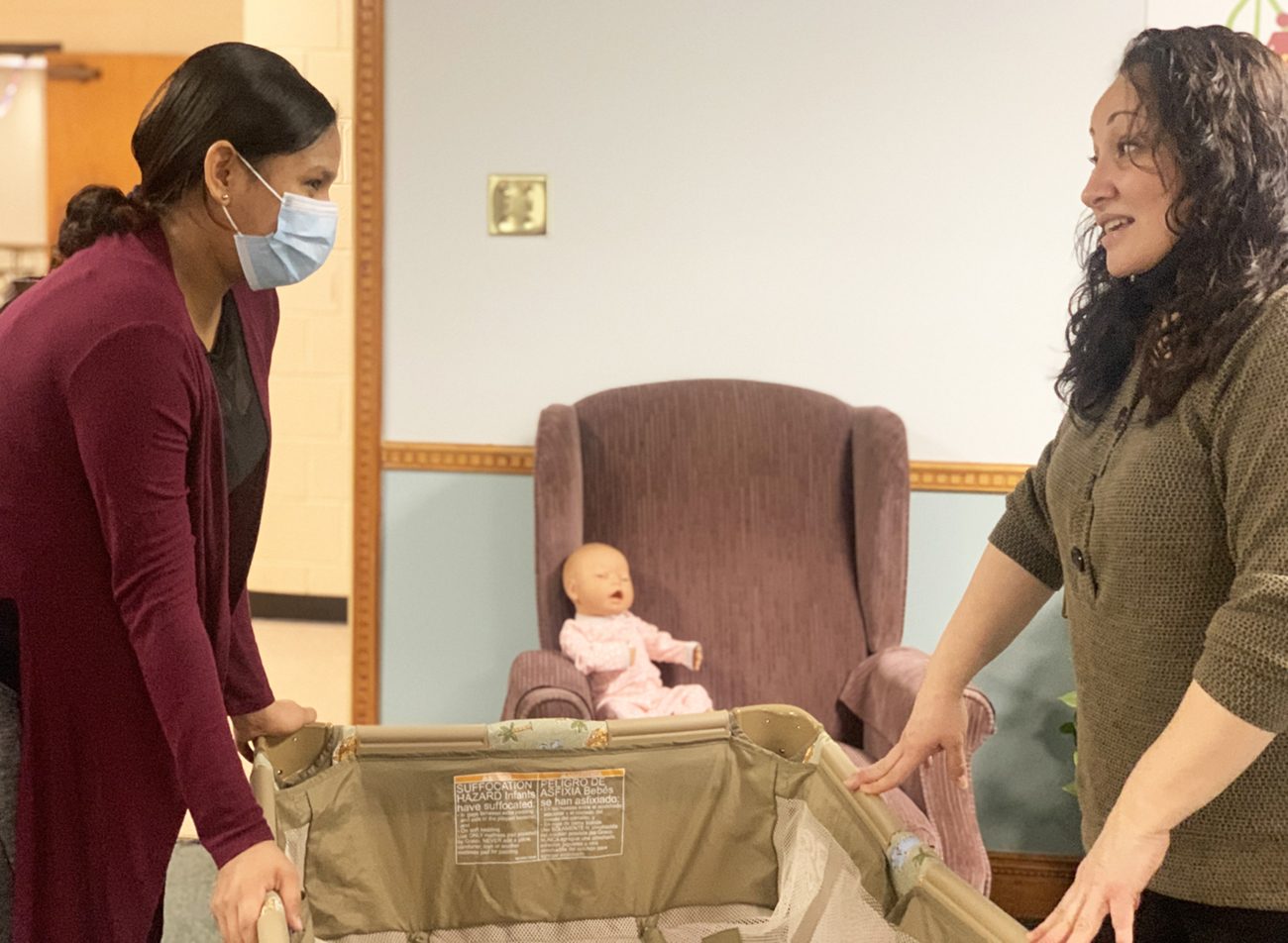 Fredeswinda Rodriguez (right), program director at the Cenacle ministry in Philadelphia, shows a client Feb. 23 how to assemble a pack-and-play unit for an infant. (Photo by Gina Christian)

An archdiocesan ministry is helping at-risk families with everything from diapers to detergent, and car seats to counseling.

The Cenacle (from Latin cena, “dinner”) was the upper room in which the Last Supper took place, and in which the Apostles, Mary and the first community of believers awaited the coming of the Holy Spirit. The site is also regarded as the location of Jesus’ appearances after his resurrection to the frightened Apostles.

And with its food and diaper pantries, brand-new laundry room, and large multipurpose areas, the archdiocesan Cenacle offers a safe, welcoming space for families grappling with poverty, violence and uncertainty.

“Here I’ve got peace and quiet, my own little center where nobody bothers me,” said Megan, a young mother whose five children range in age from 2 to 12.

The neighborhood resident said she comes once a week to the Cenacle for both laundry services and diapers.

“It helps for people who are struggling,” she said. “Between me and my kids, it’s $35 a week just for laundry, not including detergent.” 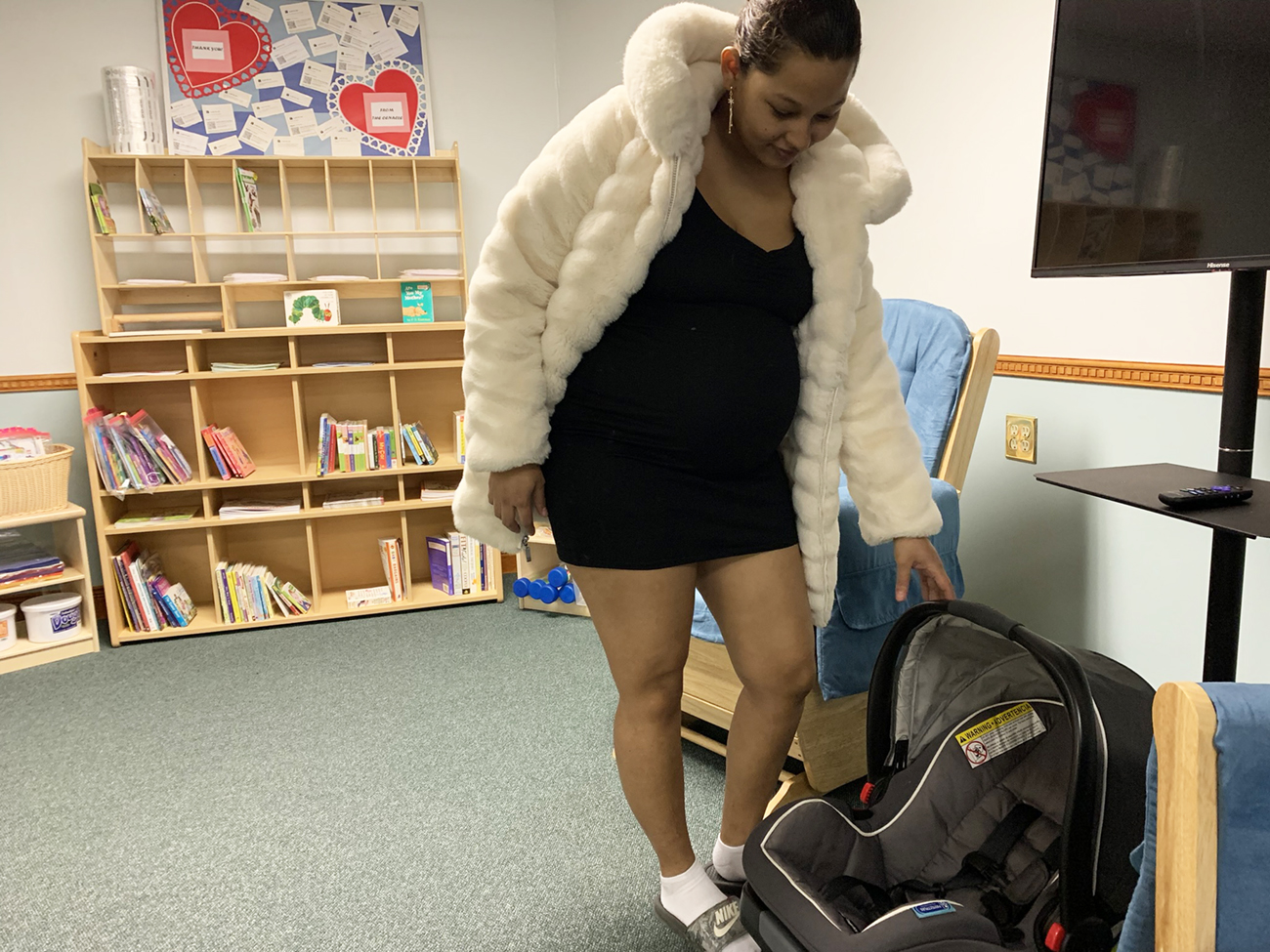 Elsy Alvarenga and other clients of the Cenacle in Philadelphia receive instruction on the proper use of car seats. (Gina Christian)

Only a handful of laundromats are nearby, she said, and “the ones that you do find, everybody’s fighting over the big washers, and the dryers don’t work.”

Diapers are another draw, Megan added.

The numbers add up for other families as well, said Cenacle program director Fredeswinda Rodriguez. Since its opening, the Cenacle has distributed close to 22,000 diapers and almost 84,000 wipes to parents in need.

But Rodriguez said she and her team don’t simply hand out supplies; instead, they provide “one-on-one classes” in the proper use of baby gear. 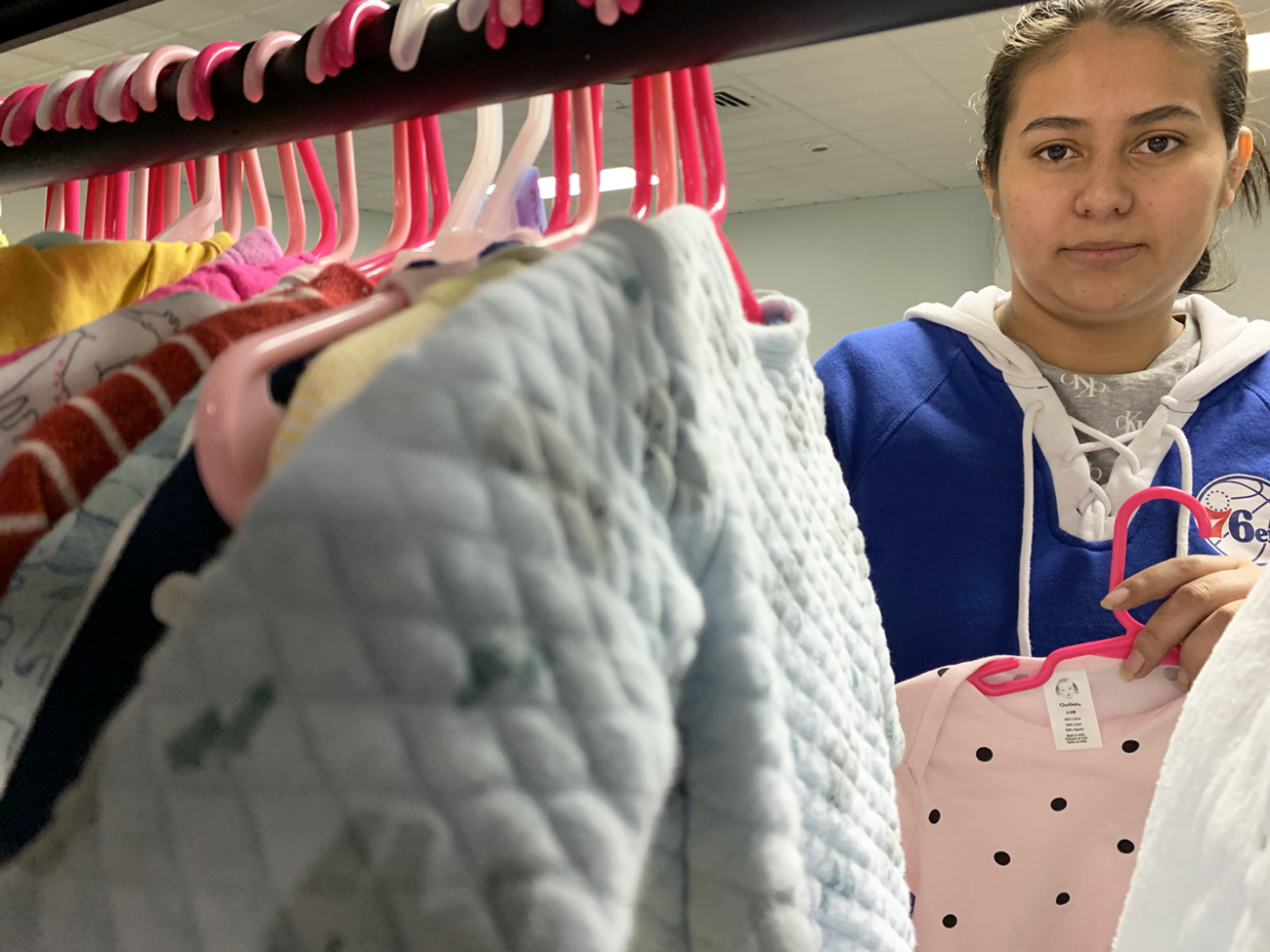 For pack-and-plays – portable cribs that double as secure play areas – “we show them how to open it, have the baby sleep safely in there and close it up,” said Rodriguez. “We show them an instructional video, but we also have them do it in front of us, to make sure they actually know how.”

The same goes for car seats, which a 2015 federal study found were used incorrectly 46% of the time.

“With the car seats, we talk about how to latch it, how to properly put your baby in there, when to change it,” said Rodriguez.

The ministry also ensures expecting parents complete birth certificate applications – a task that can be a challenge for those whose English is limited, she said.

Cenacle clients themselves are now starting to engage in problem-solving discussions based on their own experiences, said parenting educator Aimee Cantwell.

After one recent parenting class, three new mothers – all living in neighborhoods affected by Philadelphia’s rising crime rates — traded notes on “where they live and what they can’t do,” said Cantwell.

“A lot of the conversation was about going from the house to the car,” she said. “That’s all they really do, because they don’t really want to be in their neighborhood.”

Two of the mothers, both from the nearby Kensington section, stayed for several hours after the Cenacle class because they “don’t feel safe outside, but they feel safe here,” said Cantwell. “That’s the whole point, building up this community.”

Along with CSS, the Pro-Life Union and the Capuchins, donors are an essential part of the Cenacle’s ministry, said Rodriguez, citing “an abundance” of gifts from “local and suburban parishes, parents (and) the Sisters of Life.”

The pack-and-plays are made available through a collaboration with the city’s Department of Public Health, while weekly food donations are delivered from Manna on Main Street in Lansdale and then combined with the friary’s own pantry stock for distribution on Thursdays.

With its range of resources, the Cenacle works to “eliminate abortion as an option” by addressing the financial, material, emotional and spiritual deficits that contribute to it, said Rodriguez.

In the long term, the outreach focuses on five protective factors that can prevent child abuse: social and emotional competence; knowledge of parenting and child development; social connections; concrete support and resilience.

The elements are part of the Strengthening Families program, an internationally recognized social services model originally developed in the 1980s by psychologist Karol L. Kumpfer and now implemented widely throughout the United States. CSS utilizes the program at a number of its agencies throughout the five-county archdiocesan area.

“We provide an authentic witness to the community that we care for every human life at every stage of development,” said Rodriguez.

PREVIOUS: ‘Hearts of church in Philadelphia go out to Ukraine’ at liturgies, prayer gatherings