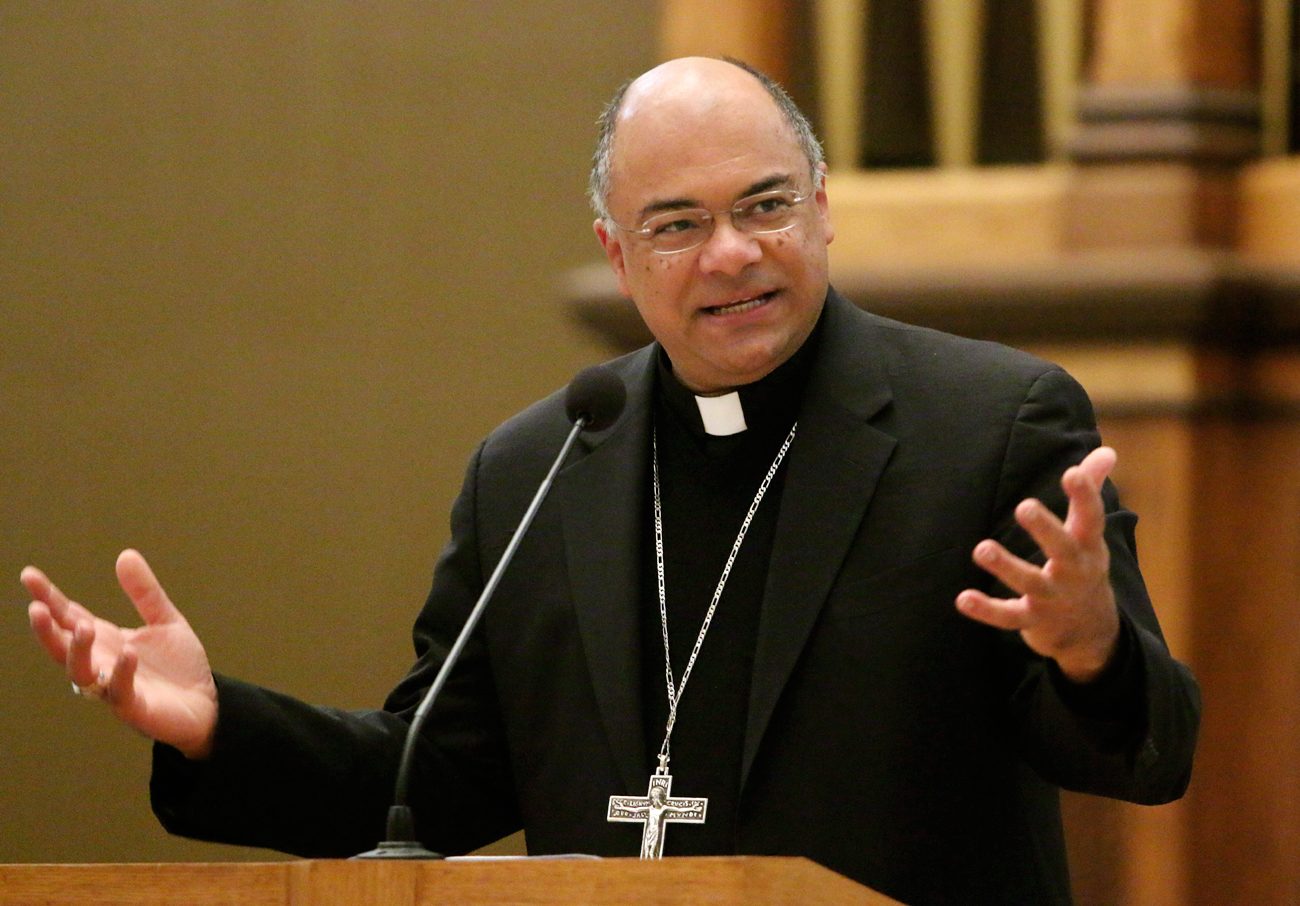 Bishop Shelton Fabre of the Diocese of Houma-Thibodaux in Louisiana moderates a USCCB Listening Session on Racism Feb. 25, 2019 at St. Joseph's University in Philadelphia. Pope Francis named him archbishop of Louisville, Kentucky on Feb. 8, 2022. (Photo by Sarah Webb)

WASHINGTON (CNS) — Pope Francis has accepted the resignation of Archbishop Joseph E. Kurtz of Louisville, Kentucky, and appointed as his successor Bishop Shelton J. Fabre of Houma-Thibodaux in southeastern Louisiana.

Archbishop Fabre, 58, is one of 12 of the U.S. Catholic Church’s African American prelates and he will be the first Black archbishop of Louisville. The newly named archbishop has headed the Louisiana diocese since 2013. He previously served as an auxiliary bishop of the Archdiocese of New Orleans from 2006 to 2013. He is chairman of the U.S. bishops’ Ad Hoc Committee Against Racism.

Archbishop Kurtz turned 75 Aug. 18, 2021, and as required by canon law, he turned in his resignation to the pope when he reached 75. He has headed the Louisville Archdiocese since August 2007.

The changes were announced Feb. 8 in Washington by Archbishop Christophe Pierre, apostolic nuncio.

Archbishop Fabre will be installed as the fifth archbishop of Louisville during a Mass March 30 at the Kentucky International Convention Center in downtown Louisville.

His episcopal motto is “Comfort My People,” which he chose when he was ordained a bishop in 2007 as an auxiliary of New Orleans. He helped with rebuilding efforts that followed the devastation of Hurricane Katrina in 2005.

Eight years later, he was appointed the bishop of Houma-Thibodaux. In August 2021, his diocese and other parts of southern Louisiana suffered devastation wrought by Hurricane Ida.

Regarding his motto, he said in a Feb. 8 statement that the words “are dear to my heart because they capture what I have always desired to do as a bishop, as a pastor of souls. I sincerely believe our Lord is communicating these words to his people right now.”

Archbishop Kurtz said he has admired Archbishop Fabre “and called him friend for 15 years.”

He said in a Feb. 8 statement that his successor “brings with him such outstanding gifts — a deep love of Jesus Christ, an abiding trust in Jesus’ care for his church, a listening and very approachable spirit, a strength of character, and a desire to serve the people of God and all people as he humbly relies on the grace of Christ and power of the Holy Spirit.”

“As I give thanks for the privilege to have served as archbishop of Louisville, I know in my heart that Pope Francis has given a great gift to the wonderful archdiocese and province of Louisville by appointing a true servant of Jesus Christ,” Archbishop Kurtz said.

Archbishop Fabre’s episcopal motto, drawn from the prophet Isaiah, “speaks to his desire to be a faithful instrument of Jesus Christ,” the retiring prelate said. “I rejoice and welcome my friend, Archbishop Shelton, as he brings Louisiana Cajun flavor to our fine commonwealth, and I pledge to support him fully in his ‘new Kentucky home.'”

Shelton Joseph Fabre was born Oct. 25, 1963, in New Roads, Louisiana, the fifth of six children. He graduated in 1981 as valedictorian of Catholic High School of Pointe Coupée, Louisiana. He entered St. Joseph Seminary College in St. Benedict, Louisiana, graduating with a bachelor’s degree in history in 1985.

He was ordained a priest for the Diocese of Baton Rouge, Louisiana, Aug. 5, 1989, and went on to serve as a pastor and associate pastor. He also served as a chaplain at Louisiana State Penitentiary at Angola, defender of the bond for the diocese’s marriage tribunal and dean of the diocese’s Northwest Deanery.

He also served on the diocesan priests’ council, college of consultors, school board and clergy personnel board. He was chairman of pastoral planning and director of the Office of Black Catholics.

As chairman of the bishops’ Ad Hoc Committee Against Racism, Archbishop Fabre led the writing of “Open Wide Our Hearts — The Enduring Call to Love,” approved by the body of bishops in 2018.

In March 2021, Archbishop Fabre discussed the pastoral with about 150 people in the Archdiocese of Louisville when he led an Archdiocesan Leadership Institute on the subject.

During the event, conducted online due to the pandemic, he centered his talk on “witnessing to the dignity of the human person as an antidote to the grave sin of racism.”

He offered his listeners — including archdiocesan and parish leaders — six ways to respond to racism. He told them, “The work is hard and the work is slow, but the work must be done. It’s our call as a church and our task as disciples of Jesus Christ.”

The following month, he and Archbishop Paul S. Coakley of Oklahoma City, chairman of the U.S. Conference of Catholic Bishops’ Committee on Domestic Justice and Human Development in a joint statement urging Catholics to “join in the hard work of peacefully rebuilding what hatred and frustration has torn down.”

“This is the true call of a disciple and the real work of restorative justice,” Bishop Fabre and Archbishop Coakley said. “Let us not lose the opportunity to pray that the Holy Spirit falls like a flood on our land again, as at Pentecost, providing us with spiritual, emotional and physical healing, as well as new ways to teach, preach, and model the Gospel message in how we treat each other.”

Archbishop Fabre is a former chairman of the USCCB’s Subcommittee on African-American Affairs and currently serves on the board of Catholic Relief Services, the U.S. bishops’ overseas relief and development agency.

As the archbishop of Louisville, he will shepherd about 156,000 Catholics in 24 counties of central Kentucky, from the Ohio River to the Tennessee border. The archdiocese, which dates to 1808, has 110 parishes that cover 8,124 miles. About 20,000 students are served by 48 schools from kindergarten to high school.

Contributing to this story was Marnie McAllister, editor of The Record, newspaper of the Archdiocese of Louisville.