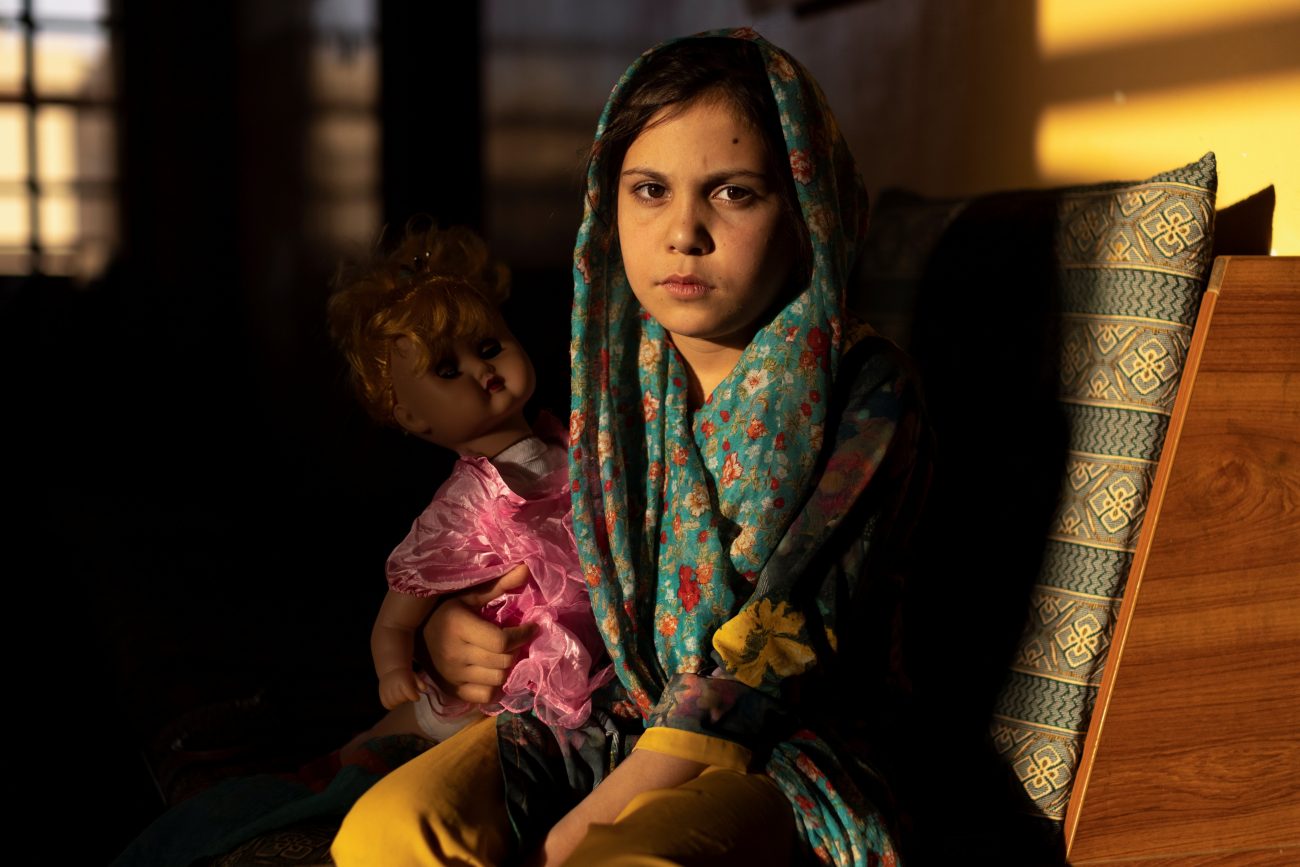 A girl poses for a photo in the living room at her orphanage in Kabul, Afghanistan, Oct. 10, 2021. Researchers estimate that 5.2 million children have been orphaned during the COVID-19 pandemic, and the number of orphaned children jumped 90% during delta variant surge. (CNS photo/Jorge Silva, Reuters)

(CNS) — An estimated 5.2 million children in 21 countries, including the United States, lost at least one parent, a custodial grandparent or a primary caregiver to COVID-19 during the first 20 months of the pandemic, social researchers and child well-being advocates said in a new study.

Notably, the researchers estimated that the number of children orphaned because of the pandemic nearly doubled during the six-month period ending Oct. 31, 2021, a period corresponding largely with the surge in the delta variant of the coronavirus.

The total number of orphaned children during the study period parallels the roughly 5 million COVID-19-caused deaths during the same time frame, the study said.

“This finding means that, globally, for every one reported COVID-19 death, at least one child experienced orphanhood or caregiver death,” the researchers concluded.

The study was published online Feb. 24 by the British medical journal The Lancet.

The study defined orphanhood as the death of one or both parents, one or both custodial grandparents, or a primary caregiver.

Catholic Relief Services representatives described the estimates as “eye-opening” and agreed with the researchers’ conclusion that “an evidence-based emergency response is becoming increasingly urgent” to meet the challenges faced by children pushed into orphanhood by the pandemic.

Jomey Joseph, CRS’s head of office in Chennai, India, said the agency and its partners have introduced broader mental health counseling and case management services to help children deal with the loss of a parent or caregiver. The goal is to help children avoid being sent to an orphanage or other group setting so they can maintain a connection to their community, she told Catholic News Service.

Researchers concluded that children who are in orphanages or other mass-residence settings face higher risks of acting violently, teenage pregnancy, mental illness, living a life in poverty and being trafficked for labor or sex.

“Just providing food and cash assistance to vulnerable children was not sufficient. Therefore, we shifted our approach to virtual monitoring and provision of food and cash, a cash-plus-care approach,” Joseph said.

She explained how one boy, 8, suddenly stopped interacting with his mother and others after his father died from COVID-19. The mother, who had no formal schooling and was unable to find work, turned to extended family for support. But the setup ended before long, because family members could not afford to support two more people.

“So we had to provide psychosocial counseling (for the boy) and get (government) support for the family,” Joseph said.

The mother and son are among dozens of people that Joseph and her colleagues are assisting with basic needs and other services in the wake of a COVID-19 death. The need continues to grow even as the number of coronavirus cases declines, she said.

The Indian boy’s situation was reflected in the researcher’s findings. They said three of every four children affected by orphanhood lost their fathers.

Mary Beth Iduh, senior program manager for faith engagement for CRS, urged the adoption of policies and support measures that prioritize children’s needs. She said surviving caregivers must be given the means to adequately care for children facing family upheaval because of a coronavirus-caused death.

“We’re seeing that definitely we need to take preventive action and not wait until a child has lost a caregiver, knowing that this is probably a trend that’s going to continue. We need to be able to mobilize the support for families,” Iduh told CNS.

In their report published in the Lancet, researchers called for equitable access to vaccines around the world to prevent the death of caregivers, especially in poor countries, and for a boost in support for evidence-based programs modified for a child’s situation and cultural setting.

Researchers focused on 21 countries, including economically prosperous nations, such as the U.S. and Germany, as well as developing nations such as Zimbabwe and India.

The report also reviewed how the estimates of the number of orphaned children were arrived at through data obtained from various government agencies, such as the U.S. Census Bureau, and analytical practices widely used by social scientists.

The study used data from government and public health agencies on deaths that amounted to more than might be expected in the years before the start of pandemic as well as fertility data to model increases in minimum estimates of COVID-19-associated orphanhood.

Statistically, the United States, with an estimated 149,300 orphaned children, ranked fourth in the world. India had the most orphaned children with more than 1.9 million, followed by Mexico with 192,500 and Brazil with 169,900.

On the opposite end of the spectrum, an estimated 2,400 German children were considered orphaned by COVID-19.

Since the World Health Organization declared a pandemic two years ago, the U.S. has had more deaths than any country — 941,909 as of Feb. 24 — according the Coronavirus Resource Center at Johns Hopkins University.

Children experienced orphanhood at different rates based on age and their locale, according to the estimates.

In South Africa, 1 of every 200 children of all ages experienced a death of a parent or caregiver.

PREVIOUS: Via Twitter, at Mass and in prayer, U.S. bishops unite behind Ukraine

NEXT: Senate rejection of abortion bill comes as relief for US bishops