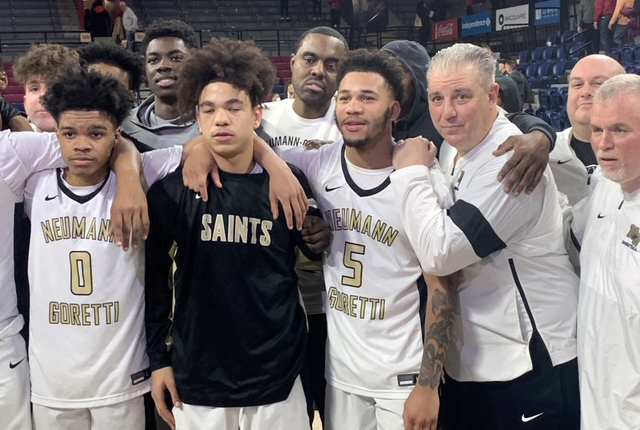 Two teams battle like crazy for four quarters, and after the final buzzer, spectators supporting both sides shake their heads and say the obvious: It’s a shame somebody had to lose.

Such was the refrain following the Philadelphia Catholic League boys basketball championship Feb. 28 at the historic Palestra. Behind three double-digit scorers and an enormous advantage in rebounding, four-seed Neumann-Goretti edged six-seed Archbishop Ryan, 61-57.

The sellout crowd certainly got its money’s worth.

If someone had arrived to the game at halftime, they had plenty to enjoy over the next 16 minutes.

Ryan countered with a bucket by senior Jalen Snead, but a trey by sophomore Khaafiq Myers made it 32-30 Neumann. By the time the third quarter ended, there had been an astounding eight lead changes.

But the most captivating moments were yet to come.

“We’re used to playing close games,” said Wright. “It really doesn’t matter. We have confidence that we’ll find a way to win the game. That’s the way we’ve been all year.”

A scintillating fourth quarter included a torrid three-minute stretch during which there were six consecutive lead changes – three of them fueled by Ryan first-team All-Catholic sophomore center Thomas Sorber, who scored eight of his 17 points in the final frame.

When senior Masud Stewart (eight points) converted a three-point play with 3:12 remaining in regulation, the Saints led, 53-51. They would go on to make four of their next six free throws while adding baskets by Myers and junior standout Sultan Adewale (13 points, 13 rebounds, five blocks).

“Ryan did a great job,” said Arrigale. “I thought in the beginning of the year there were seven or eight teams that were good enough. As the season went along, I thought the top five or six would beat anybody anytime. That’s the way it turned out, with the four playing the six in the final.

Having upset three-seed Archbishop Wood and two-seed West Catholic to advance to the final for the first time since 2008, the Raiders were visibly despondent. With Sorber corralling a sterling 17 points, seven blocks, and six rebounds, Snead amassing 10 points and 10 rebounds, and senior Luke Boyd connecting on five three-pointers, Ryan’s long wait appeared over.

Neumann-Goretti, however, barely outlasted the Raiders, just like they had in a 52-49 win during the regular season.

“This one is tough,” said Ryan junior and Gesu School product Michael Paris, who scored nine points. “It’s going to sting for a while. We gave everything we had and unfortunately it wasn’t enough.

“I’m proud of how hard we played, but I feel really bad we didn’t win. We were close. We were so close.”

Arrigale sympathized with his opponent.

“They were going for their first one,” said Arrigale. “Their school was all jazzed up. It’s hard to have somebody lose.”

On that, everyone could agree. 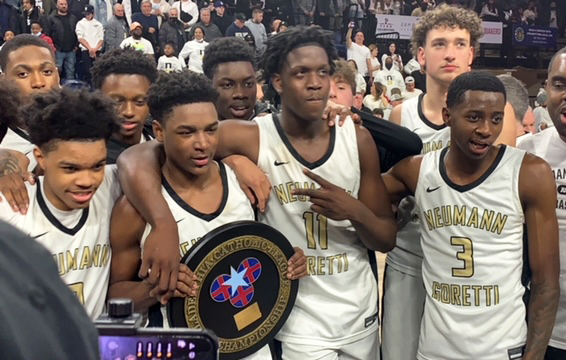 NEXT: 50 years ago, Mighty Macs learned to live their faith on life’s courts