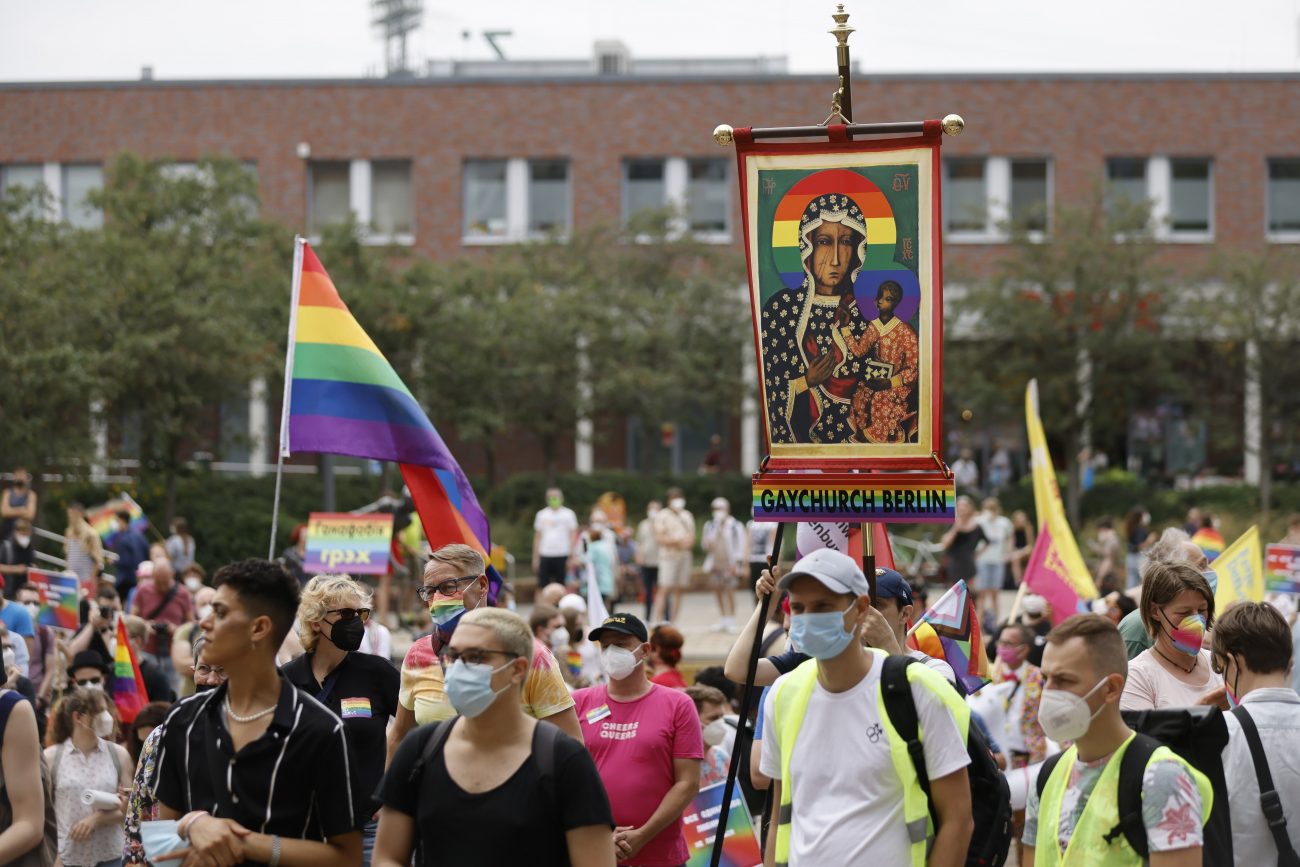 Activists carrying a rainbow flag and a banner with an image of Mary and the Christ Child attend the second "Marzahn Pride" march in Berlin July 17, 2021. Cardinal Jean-Claude Hollerich of Luxembourg, president of the Commission of the Bishops' Conferences of the European Union, said in an interview with news agency KNA that he believes the current church teaching on homosexuality is outdated. (CNS photo/Axel Schmidt, Reuters)

BERLIN (CNS) — The president of the Commission of the Bishops’ Conferences of the European Union said he believes the current church teaching on homosexuality is wrong, not based in science.

In an interview with the German Catholic news agency KNA, Cardinal Jean-Claude Hollerich of Luxembourg also said if he were Cologne Cardinal Rainer Maria Woelki, he would tender his resignation, but the cardinal “is a good Christian, and he will certainly find the right way for himself.”

Cardinal Hollerich spoke to KNA about the public campaign by more than 100 Catholic Church employees who recently outed themselves as queer in Germany. Queer is a collective term for people who are not heterosexual and whose sense of personal identity and gender does not correspond with their birth sex.

“I believe that the sociological-scientific foundation of this teaching is no longer correct,” Cardinal Hollerich told KNA. He said it was time for a fundamental revision, and the way Pope Francis had spoken about homosexuality in the past could lead to a change in doctrine.

Catholic teaching states that “homosexual acts are intrinsically disordered.” According to the Catechism of the Catholic Church (nos. 2357-2359), such acts “are contrary to the natural law. They close the sexual act to the gift of life. They do not proceed from a genuine affective and sexual complementarity. Under no circumstances can they be approved.”

It also teaches that men and women with an inclination toward homosexuality “must be accepted with respect, compassion, and sensitivity. Every sign of unjust discrimination in their regard should be avoided.”

“What was condemned in the past was sodomy,” Cardinal Hollerich said. “At that time, it was thought that the whole child was contained in the sperm of the man, and that was simply transferred to homosexual men. But there is no homosexuality in the New Testament. There is only the mention of homosexual acts, which were partly pagan ritual acts. That was, of course, forbidden. I think it is time for a fundamental revision of the doctrine.”

The cardinal said it was important for the church to remain human. He added that he knew of homosexual priests and laypeople in the Archdiocese of Luxembourg. “And they know that they have a home in the church. With us, no one is dismissed because they are homosexual, with us no one has ever been dismissed because of that.”

Divorced and remarried people were also employees of the church in the Archdiocese of Luxembourg, he said. “I can’t kick them out. They would become unemployed. How can such a thing be Christian?”

Cardinal Hollerich also spoke to KNA about Cardinal Woelki, who is currently on sabbatical until March following criticism of his handling of clerical abuse cases in the Cologne Archdiocese.

“It seems that the archbishop is no longer welcome in his diocese among a large majority,” Cardinal Hollerich told KNA. “If that’s what happened to me, I would tender my resignation.”

He said it was true that Cardinal Woelki had not brought any blame on himself in the reappraisal of abuse cases and that he had devoted himself intensely to the issue.

“But he has very poor communication,” Cardinal Hollerich said, adding that he knew and appreciated Cardinal Woelki.

He said if he were in Cardinal Woelki’s position, he would “go to a parish somewhere. A student community, for example. As a Christian, I don’t have to be at the top to live my faith.”

The Luxembourg cardinal criticized his Cologne colleague for not allowing the first abuse report he commissioned to be published.

“You can’t do that in the digital age,” he said. Cardinal Woelki had justified his decision based on “methodological deficiencies” in the investigation and commissioned a new legal report.

Cardinal Hollerich also said it was “difficult” when the costs of legal reports exceeded the payments made to victims. “In that case something is wrong.”

According to the Archdiocese of Cologne, Cardinal Woelki spent around 2.8 million euros from 2019 to 2021 on legal experts, media lawyers and communication consultants as part of the reappraisal of abuse. Since 2010, about 1.5 million euros has been paid to victims of clerical abuse in recognition of their suffering.

The current interim administrator of the archdiocese, Cologne Auxiliary Bishop Rolf Steinhäuser, ordered a review of the contracts because church committees may have been ignored in the process of awarding them.

NEXT: Now or never: People must overcome challenges together, pope says