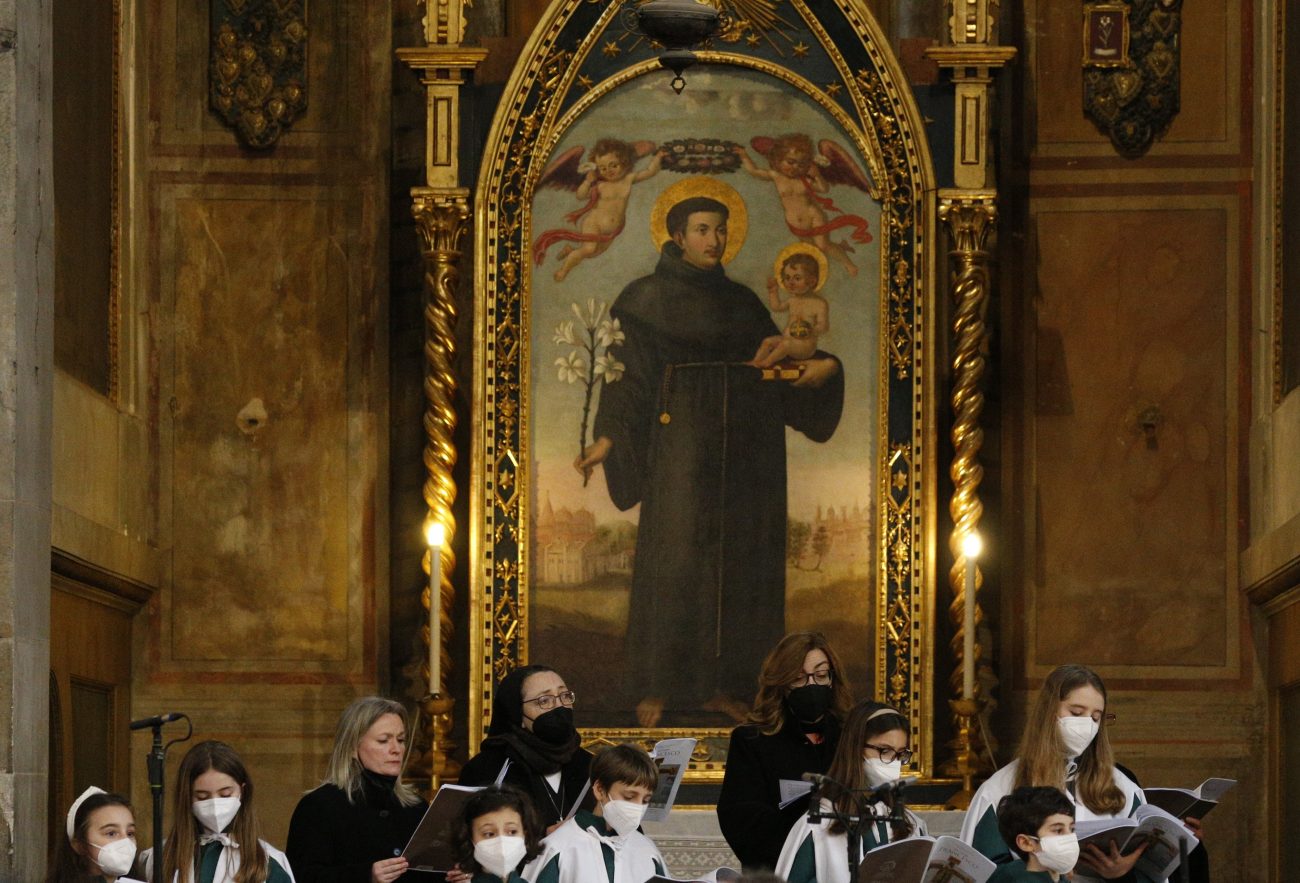 Choir members sing during the closing Mass of the "Mediterranean for Peace" meeting of bishops and mayors at the Basilica of Santa Croce in Florence, Italy, Feb. 27, 2022. Pope Francis led the Angelus by video link at the conclusion of the Mass. (CNS photo/Paul Haring)

FLORENCE, Italy (CNS) — Bishops and mayors from cities around the Mediterranean gathered to talk about migration, peace, development and the promotion of human rights, but war broke out in Ukraine and overshadowed their discussions.

Benjamina Karic, the 31-year-old mayor of Sarajevo, Bosnia-Herzegovina, was at the meeting in Florence. Her city has become the symbol of the last war fought in Europe — the 1991-95 Balkans war. Karic, speaking on Italian television Feb. 26, offered prayers for the people in Ukraine’s capital, Kyiv, especially for the frightened children huddled in shelters as the fighting continued.

The “Mediterranean for Peace” meeting opened in Florence Feb. 23 before Russian President Vladimir Putin launched his offensive. The gathering brought together 60 bishops from Europe, the Middle East and North Africa for their own meeting and for joint discussions with 65 mayors from cities in 20 countries around the Mediterranean basin.

Pope Francis had been scheduled to address the bishops and mayors at the conclusion of their meeting Feb. 27 and to celebrate a Mass in Florence, but he canceled his trip after his doctors prescribed rest for severe knee pain.

Cardinal Gualtiero Bassetti, president of the Italian bishops’ conference, celebrated the Mass instead, leading prayers for Pope Francis and, especially, for an end to what he described in his homily as “an unjust and useless war.”

“We are living in dramatic hours,” the cardinal said Feb. 26 as he opened a joint session of the bishops and mayors.

“The madness of war must be stopped,” he said. Too many of the bishops and mayors present “are familiar with this scourge, which is why we have asked and continue to ask for peace. Every conflict is a ‘useless slaughter,’ as Benedict XV said at the height of the First World War. The present can only be encapsulated in a word that becomes an invocation: peace!”

Dario Nardella, the mayor of Florence, told the gathering, “These are days marked by fear, despair and deep concern for what is happening in Ukraine because of this attack that is striking civilian victims and not only military ones.”

The bishops and the mayors do not have armies, he said, but they are responsible for building bridges, helping citizens move around, ensuring the education of children — all of which promote dialogue, which “is the only way to arrive at peace between our cities and between our people.”

At the end of the meeting, the participating bishops and mayors signed the “Florence Charter,” pledging to work together to promote peace and social harmony, respect the rights of migrants and refugees, guarantee religious freedom, protect the environment and increase employment opportunities, especially for women and young people.

But the charter did not ignore Ukraine: “A sense of pain has seized bishops and mayors, who jointly hope that violence and the use of weapons could come to a halt, great suffering to the Ukrainian people be avoided and that negotiations to rebuild peace could start immediately.”

Closing the meeting in place of the pope Feb. 27, Cardinal Bassetti insisted on the value of the discussions, particularly given the war in Ukraine.

“While a deranged war breaks out in Ukraine bringing death and destruction, the clock of history has stopped its hands in Florence and tones the hour of peace and dialogue,” he said.

Europe, Asia and Africa all touch the Mediterranean “with different cultural traditions and with a conflicting political history, but also with strong points of interconnection,” he said, especially through its cities and its religions.

“The Mediterranean has historically been a place of transit and trade — not just military clashes, not just political frontiers,” he said, “but also a meeting place for coastal cities and religious communities.”

The task of political and religious leaders around the sea and around the world, the cardinal said, is to “unite what has divided us for centuries, to unite in the name of human fraternity … to unite for peace, an epic challenge.” 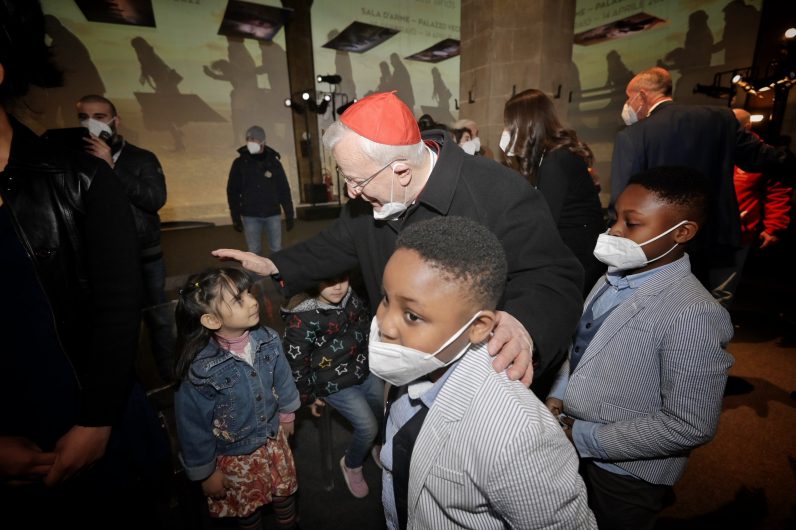 Cardinal Gualtiero Bassetti of Perugia-Città della Pieve, president of the Italian bishops’ conference, greets children during a meeting with refugees and displaced families in Palazzo Vecchio in Florence, Italy, Feb. 27, 2022. Pope Francis had been scheduled to lead the encounter but wasn’t able to visit Florence because of severe knee pain. (CNS photo/Vatican Media)

PREVIOUS: ‘With a heart broken,’ pope prays for peace in Ukraine

NEXT: Papal pleas for peace: Even if unheeded, Pope Francis continues tradition