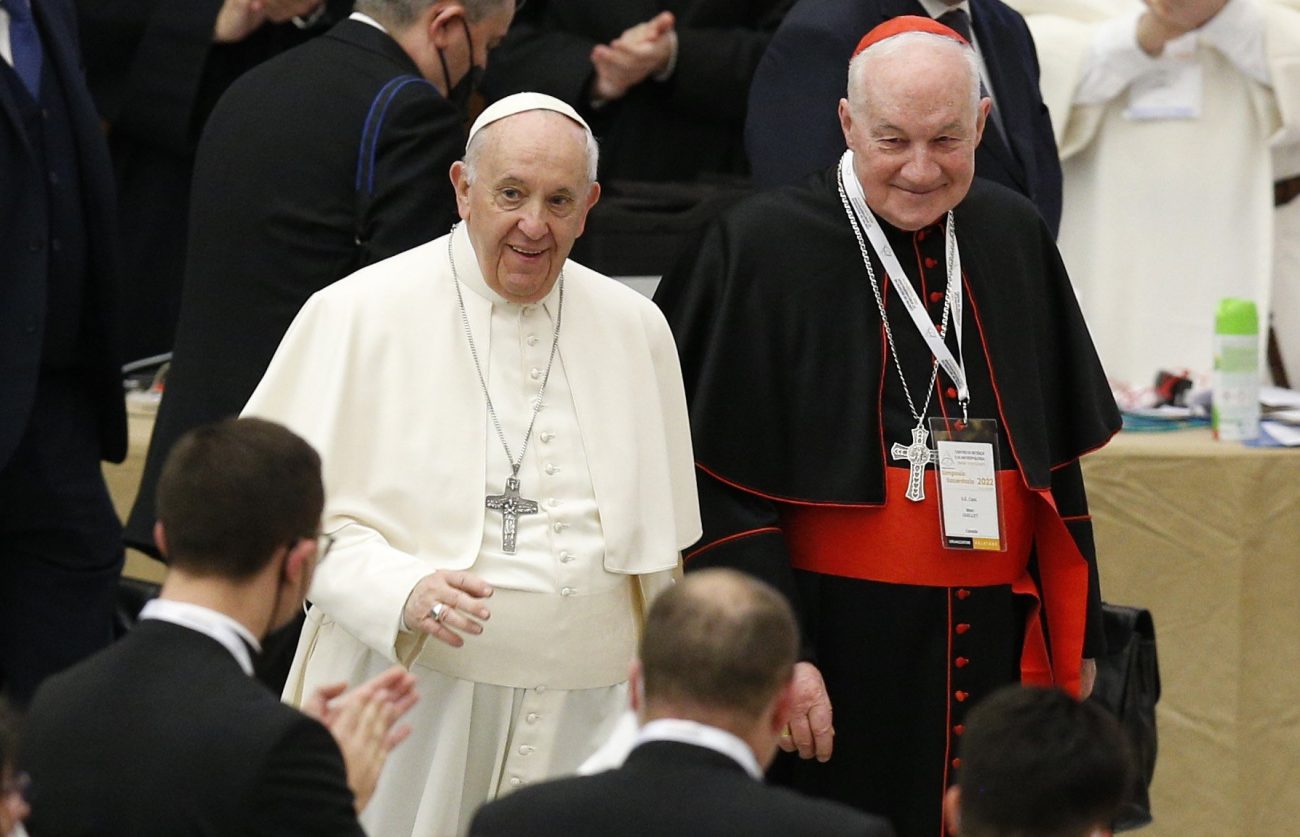 Pope Francis walks next to Cardinal Marc Ouellet, prefect of the Congregation for Bishops, as he arrives to open an international symposium on priesthood at the Vatican Feb. 17, 2022. (CNS photo/Paul Haring)

VATICAN CITY (CNS) — Opening an international conference on priesthood, Pope Francis insisted that those who are not close to God in prayer, close to their bishop and other priests and immersed in the lives of their people are simply “‘clerical functionaries’ or ‘professionals of the sacred.'”

“A priest needs to have a heart sufficiently ‘enlarged’ to expand and embrace the pain of the people entrusted to his care while, at the same time, like a sentinel, being able to proclaim the dawning of God’s grace revealed in that very pain,” the pope said Feb. 17 as he opened the conference in the Vatican audience hall.

With some 500 people attending in person and hundreds more online, the Feb. 17-19 symposium was organized by Canadian Cardinal Marc Ouellet, prefect of the Congregation for Bishops, and aimed at renewing a theological understanding of Catholic priesthood.

The cardinal told participants he understood how people could wonder about the purpose of such a conference given “the current historical context dominated by the drama of sexual abuse perpetrated by clerics.”

“Should we not rather refrain from talking about the priesthood when the sins and crimes of unworthy ministers are on the front pages of the international press for betraying their commitment or for shamefully covering up for those guilty of such depravity?” he said they could ask. “Shouldn’t we rather keep silent, repent and look for the causes of such misdeeds?”

A discussion of priesthood today, he said, must begin with expressing “our sincere regret and asking again for forgiveness from the victims, who suffer for their lives destroyed by abusive and criminal behavior, which has remained hidden for too long and treated lightly out of a desire to protect the institution and the perpetrators instead of the victims.”

But looking at the priesthood, including ways that it has been distorted by clericalism, could help the church truly turn a new page, Cardinal Ouellet said.

Clericalism, he said, involves “a set of phenomena — abuse of power, spiritual abuse, abuses of conscience — of which sexual abuse is only the tip of the iceberg, visible and perverse, emerging from deeper deviations to be identified and unmasked.”

A rediscovering of the priesthood of all believers, conferred through baptism, and its relationship to the ministerial priesthood must be the starting point, he said. Beginning there also provides a way to value the role of women in the church and the gifts that they bring.

In his talk to the conference, Pope Francis did not mention the abuse crisis specifically, but instead focused on what he said he has learned in more than 50 years of priesthood and from listening to and assisting priests as a Jesuit provincial, archbishop and pope.

“It may be that these reflections are the ‘swan song’ of my own priestly life,” the 85-year-old pope said, “but I can assure you that they are the fruit of my own experience.”

Proximity, he said, allows the priest “to break all temptations of closure, self-justification and of living like a ‘bachelor.'”

Closeness in all four areas allows priests “to manage the tensions and imbalances that we experience daily,” the pope said. They are not “an extra assignment,” but “a gift” that the Lord gives “to keep the vocation alive and fruitful.”

Closeness to God and closeness to the people are intimately and intrinsically linked, he said, “since the prayer of a shepherd is nurtured and becomes incarnate in the heart of God’s people. When he prays, a pastor bears the marks of the sorrows and joys of his people, which he presents in silence to the Lord.”

At a time when many people experience a growing sense of being “orphaned,” Pope Francis said, a pastor who is close to his people knows how to gather them and form a community where people, including priests, grow in their sense of belonging.

“This sense of belonging will in turn prove an antidote to the distortion of vocation that happens whenever we forget that the priestly life is owed to others — to the Lord and to the persons he has entrusted to us,” he said. “Forgetting this is at the root of clericalism and its consequences.”

“Clericalism is a distortion because it is based not on closeness but on distance,” the pope said.

The church is and is meant to be a community of believers who help one another, share each other’s burdens, rejoice with each other and work together to proclaim the Gospel, he insisted.

Pope Francis cited the African proverb, “If you want to go fast, go alone; if you want to go far, go with others,” and told conference participants that while “sometimes it seems that the church is slow — and that is true — I like to think of it as the slowness of those who have chosen to walk in fraternity.”

Priests need to be “clear” and honest about how much envy exists within their ranks and how destructive it is, he said. “And there are also clerical forms of bullying.”

But “when priestly fraternity thrives and bonds of true friendship exist, it likewise becomes possible to experience with greater serenity the life of celibacy,” Pope Francis said. “Celibacy is a gift that the Latin church preserves, yet it is a gift that, to be lived as a means of sanctification, calls for healthy relationships, relationships of true esteem and true goodness that are deeply rooted in Christ.”

“Without friends and without prayer,” he said, “celibacy can become an unbearable burden and a counter-witness to the very beauty of the priesthood.”

PREVIOUS: Church in Brazil shelters those who lost homes in mudslides