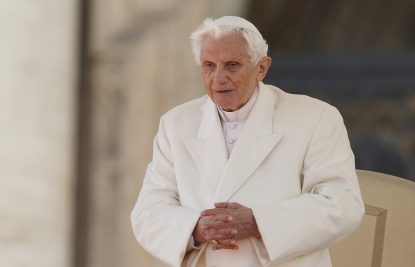 Pope Benedict XVI is pictured during his final general audience in St. Peter’s Square at the Vatican in this Feb. 27, 2013, file photo. The retired pope released a statement Feb. 8 concerning the recent report on abuse in the Archdiocese of Munich and Freising, where he served as archbishop from 1977-1982. (CNS photo/Paul Haring)

VATICAN CITY (CNS) — At the age of 94, retired Pope Benedict XVI said he knows he will soon stand before God’s judgment and he prayed that he would be forgiven for his shortcomings, including in handling allegations of clerical sexual abuse.

“Even though, as I look back on my long life, I can have great reason for fear and trembling, I am nonetheless of good cheer, for I trust firmly that the Lord is not only the just judge, but also the friend and brother who himself has already suffered for my shortcomings, and is thus also my advocate,” he said.

In response Feb. 8 to a recent report on sexual abuse cases in the German Archdiocese of Munich and Freising, Pope Benedict also confirmed that an error in the testimony written on his behalf had been an oversight and “was not intentionally willed and I hope may be excused.”

“To me it proved deeply hurtful that this oversight was used to cast doubt on my truthfulness, and even to label me a liar,” he said in a letter released Feb. 8 by the Vatican.

However, the retired pope, who headed the Munich Archdiocese from 1977 to 1982, emphasized his feelings of great shame and sorrow for the abuse of minors and made a request for forgiveness to all victims of sexual abuse.

“I have had great responsibilities in the Catholic Church. All the greater is my pain for the abuses and the errors that occurred in those different places during the time of my mandate,” Pope Benedict wrote.

The letter comes after a German law firm released a report in late January on how abuse cases were handled in the Archdiocese of Munich and Freising.

The report, compiled at the request of the archdiocese, incriminated retired Pope Benedict, with lawyers accusing him of misconduct in four cases during his tenure in Munich. Lawyer Martin Pusch of the law firm Westpfahl Spilker Wastl said the retired pope had denied wrongdoing in all cases.

The Munich investigation followed two years of research and covered the period from 1945 to 2019, centering on who knew what about sexual abuse and when, and what action they took, if any. The report — made up of four volumes with almost 1,900 pages — identified at least 497 victims and 235 abusers.

Pope Benedict had submitted an 82-page written statement to the panel conducting the investigation, and, in it, the former pope had said he did not take part in a meeting in 1980 on the case of the repeat offender Peter H., who came to Munich from Essen.

The retired pope amended that statement after the report came out, saying he was present at the 1980 meeting, but the meeting focused only on finding housing for Peter H. while he underwent therapy; the priest’s abusive history was not discussed, he said.

That statement, issued Jan. 24 on Pope Benedict’s behalf by his secretary, Archbishop Georg Ganswein, said the error of incorrectly stating the retired pope had not been at the meeting “was not done out of bad faith but was the result of an oversight in the editing of his statement.”

In his Feb. 8 response, the retired pope said there was a “small group of friends who selflessly compiled on my behalf my 82-page testimony for the Munich law firm, which I would have been unable to write by myself.”

“In addition to responding to the questions posed by the law firm, this also demanded reading and analyzing almost 8,000 pages of documents in digital format. These assistants then helped me to study and analyze the almost 2,000 pages of expert opinions,” he wrote, adding that those results were published as an appendix to his letter.

He said that during this “massive” amount of work in establishing his position, “an oversight occurred regarding my participation in the chancery meeting of 15 January 1980. This error, which regrettably was verified, was not intentionally willed and I hope may be excused.”

This error should not “detract from the care and diligence” with which his friends helped formulate his response, he said.

And while it was “deeply hurtful” for the oversight to have been used to cast doubt on him, Pope Benedict wrote, “I have been greatly moved by the varied expressions of trust, the heartfelt testimonies and the moving letters of encouragement sent to me by so many persons.”

He dedicated the rest of his two-page letter to the importance of “confession,” noting that each day at the beginning of Mass “we publicly implore the living God to forgive” the sins committed through “our fault, through our most grievous fault.”

“It is clear to me that the words ‘most grievous’ do not apply each day and to every person in the same way,” he wrote. “They tell me with consolation that, however great my fault may be today, the Lord forgives me, if I sincerely allow myself to be examined by him and am really prepared to change.”

He said that he has “come to understand that we ourselves are drawn into this grievous fault whenever we neglect it or fail to confront it with the necessary decisiveness and responsibility, as too often happened and continues to happen.”

“Once again I can only express to all the victims of sexual abuse my profound shame, my deep sorrow and my heartfelt request for forgiveness,” he said.

Together with the pope’s letter, the Vatican published an “analysis” of the Munich report’s assessment that then-Cardinal Ratzinger allegedly mishandled abuse allegations on four occasions when he led the German archdiocese. The analysis was compiled by a small team of canon lawyers and other experts who had helped craft the original 82-page response during the initial phase of the investigation.

This team’s response focused primarily on the case of “priest X,” the serial abuser also known as Peter H. It said the Munich report’s assessment did “not correspond to the truth” because the now-retired pontiff “was neither aware that priest X was an abuser, nor that he was included in pastoral activity.”

According to the Munich report, then-Cardinal Ratzinger “employed this priest in pastoral activity, even though he was aware of the abuses committed by him, and thus would have covered up his sexual abuses.”

However, records of the key 1980 meeting indicated that sexual abuse committed by the priest was not discussed, the team said, and the reason for accommodating priest X in Munich for therapy there “was not mentioned.”

Pope Benedict did not knowingly perjure himself, as the Munich report claimed, when he initially denied being present at the 1980 meeting, the team said.

It had been a “transcription error” and Pope Benedict “did not notice” it given the time constraints, it said. The minutes of the 1980 meeting were included in statements made by then-Cardinal Ratzinger, so it would make no sense “for him to intentionally deny his presence at the meeting.”

There is also no evidence behind the report’s “allegation of misconduct or conspiracy in any cover-up,” the team said. “As an archbishop, Cardinal Ratzinger was not involved in any cover-up of acts of abuse.”

NEXT: Tensions over vaccine mandates creep into church