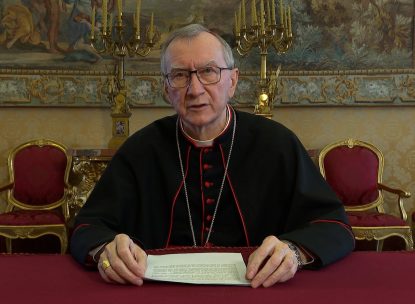 Cardinal Pietro Parolin, Vatican secretary of state, speaks in a message pleading for an end to the hostilities in Ukraine, in this still image taken from video released by the Vatican Feb. 24, 2022. Russian President Vladimir Putin on Feb. 24 launched a wide-ranging attack on cities across Ukraine. (CNS photo/Vatican Media)

VATICAN CITY (CNS) — Despite Russia’s decision to begin military operations in Ukraine, there still is time to stop and “spare the world from the folly and horrors of war,” said the Vatican secretary of state.

Just hours after Russian President Vladimir Putin began a wide-ranging attack on cities across Ukraine Feb. 24, Cardinal Pietro Parolin, the Vatican secretary of state, issued a video message pleading for an end to the hostilities.

“In light of today’s developments in the crisis in Ukraine, we see even more clearly the timeliness of the clear and heartfelt appeal” made by Pope Francis Feb. 23, the cardinal said.

The pope had spoken at his weekly general audience of his “great sorrow” and his “anguish and concern” over the continued buildup of Russian troops on the Ukrainian border and Putin’s decision to recognize two areas of eastern Ukraine as independent.

Pope Francis, Cardinal Parolin said, “urged all parties involved to ‘refrain from any action that would cause even more suffering to the people,’ ‘destabilizing coexistence between nations’ and “bringing international law into disrepute.'”

The pope’s appeal, he said, “has taken on dramatic urgency following the beginning of Russian military operations in Ukrainian territory.”

“The tragic scenarios that everyone feared are becoming a reality,” Cardinal Parolin said. “Yet there is still time for goodwill, there is still room for negotiation, there is still a place for the exercise of a wisdom that can prevent the predominance of partisan interests, safeguard the legitimate aspirations of everyone and spare the world from the folly and horrors of war.”

“As believers,” he said, “we do not lose hope for a glimmer of conscience on the part of those who hold in their hands the fortunes of the world.”

Catholics will continue to fast and pray for peace in Ukraine and in the entire world, he said, especially on Ash Wednesday, March 2, as Pope Francis has asked. 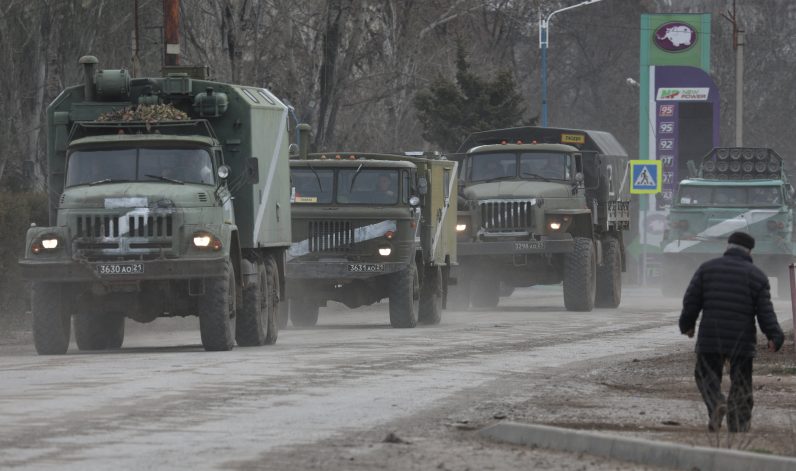 PREVIOUS: Pope calls for day of prayer, fasting for peace in Ukraine

NEXT: ‘In the name of God, stop now!’ European leaders react to Ukraine attacks