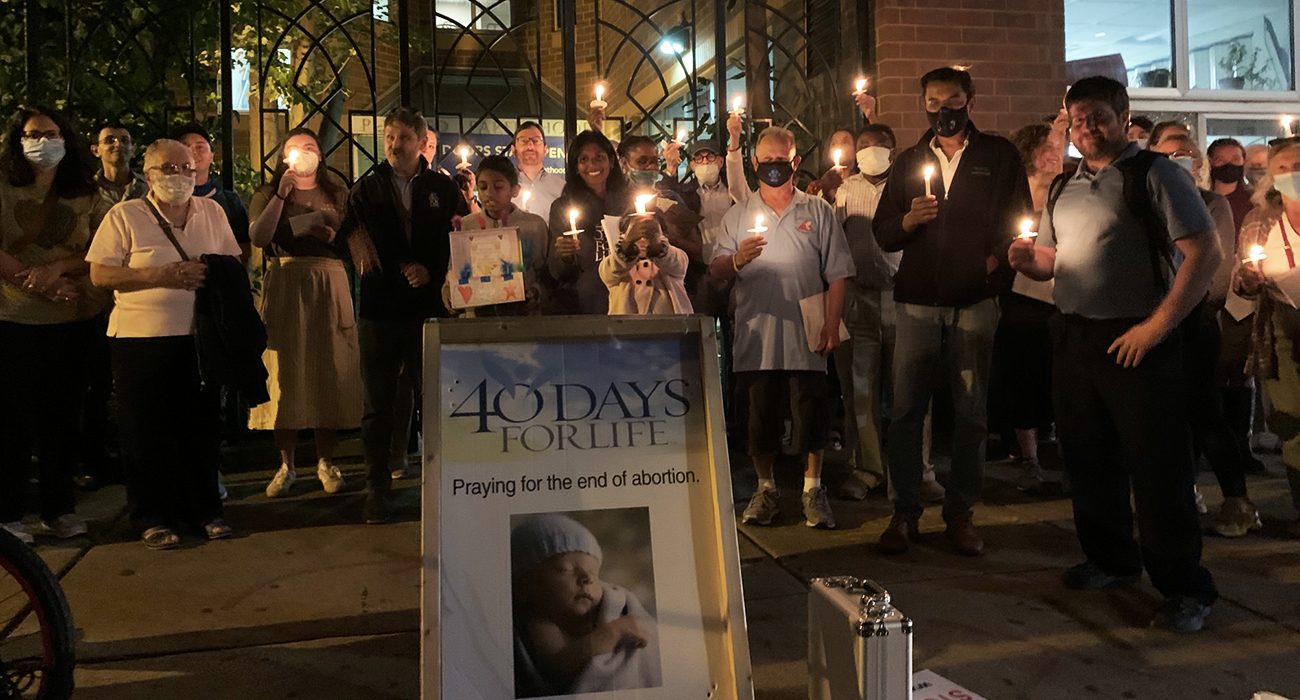 Some 50 participants gathered for a Sept. 23, 2020 candlelight prayer vigil sponsored by 40 Days for Life in front of Planned Parenthood's downtown Philadelphia location. The annual five-week campaign seeking to end abortion through prayer, fasting and outreach also coincides with Lent in many areas of the world, underscoring the need for "spiritual revival" in pro-life work, said Steven Bozza of the archdiocesan Office for Life and Family. (Gina Christian)

An annual Lenten pro-life campaign is set to “attach the sacrilege of abortion to the cross” and foster “spiritual revival,” said Steven Bozza, director of the archdiocesan Office for Life and Family.

On March 5, Bozza’s office will sponsor the opening Mass of the archdiocesan 40 Days for Life initiative, part of a global movement active in 63 countries to advocate for an end to abortion through prayer, fasting, vigils and community outreach. The liturgy will take place at 5:15 p.m. at the Cathedral Basilica of SS. Peter and Paul, with Father Dennis Gill, director of the archdiocesan Office for Divine Worship, as principal celebrant.

Details and registration information for a variety of vigils can be found on a dedicated webpage hosted by Bozza’s office.

The campaign, which mirrors the 40 days of Lent, has taken on new significance as the Supreme Court is set to rule in June on the Dobbs v. Jackson Women’s Health Organization case , which could overturn Roe v. Wade and redirect the abortion issue to the state level for legislation.

Even if the court revokes the 1973 Roe decision – since which more than 61 million abortions (an average of 2,000 per day) have taken place in the U.S. – Bozza said he doesn’t think “anybody is taking anything for granted.”

“I think the sense out in the field is that people are gearing up instead of gearing down,” he said.

While the Senate failed to pass the Women’s Health Protection Act (H.R. 3755) — which would have codified the Roe decision and eliminated pro-life laws at every level of government — states such as New Jersey have moved to enshrine abortion in their constitutions.

In addition, chemical abortions, the pills for which are now widely available in several states through telemedicine and online delivery services, “will start to become more prominent depending on the state in which you live,” said Bozza.

Over the decades, the pro-life movement has developed robust resources for pregnancy and parenting support, housing, food and shelter, he said, reducing the risk factors that make women abortion-vulnerable.

“We have to remember that a good deal of great of women go into the abortion clinic for a lot of reasons that can be solved,” said Bozza.

Men also suffer through abortion, he said, pointing to the work of ministries that help men develop their spirituality, interpersonal relations and parenting skills.

“We have to start doing this when kids are in school,” said Bozza, citing the efforts of the Culture Project, Students of Life and Pennsylvanians for Human Life, as well as St. John Paul II’s teaching on the theology of the body.

Above all, said Bozza, a change of heart and soul is needed.

“Until more people are on their knees in worship to God – whether they are Catholic, Protestant, Jewish or Muslim – and we become more attached to him, none of this is going to change,” he said. “But through a true evangelical effort and the Holy Spirit, we will have the groundswell to say, ‘Enough is enough.’”

NEXT: ‘One Can Meal Drive’ tackles hunger, one serving at a time