It’s been said that ministry takes money, and one local foundation is taking that as the motivation to serve in the Philadelphia region and across the globe.

For the past nine years the Catholic Foundation of Greater Philadelphia has been working to build a community of donors in the Philadelphia Archdiocese to support Catholic ministry in this region.

And as a result of the war in Ukraine, the foundation is extending its reach into Europe and the ever-growing need for humanitarian relief of Ukrainians suffering from the Russian invasion that began more than a month ago.

Through its Building the Church Universal Fund, donations are being collected to benefit the Ukrainian Catholic Archeparchy of Philadelphia.

So far more than $15,000 has been collected for the Byzantine rite church, which intends to funnel the locally raised money to priests and religious providing in ministry in war-torn Ukraine, according to Sarah Hanley, president and CEO of the foundation.

A member of the foundation board had established the fund previously, “but it really picked up momentum” after Russia’s invasion of Ukraine Feb. 24, Hanley said.

The fund is “seeking to support important and life-saving work that is building capacity for humanitarian aid,” she added.

While the foundation shares in the mission of the church to serve all people and build the Kingdom of God in this area, it is not an agency of the Archdiocese of Philadelphia but rather was formed as an independent organization with a separate nonprofit status, board of directors, funding and administration. 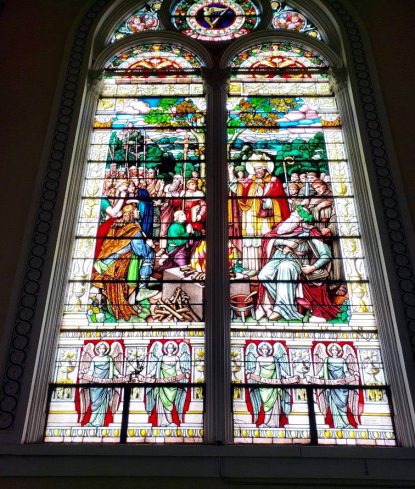 One prominent example of the foundation’s work to help parishes of the Philadelphia Archdiocese is its current effort on behalf of St. Patrick Parish in Norristown.

Even with the energizing influx of young immigrant families mostly from Mexico, time is catching up with the venerable old church, founded in 1835: the interior plaster ceiling of the church partially collapsed in early 2021.

That meant the main worship space was off limits, and all liturgies, sacraments and social outreach must take place in the basement Church Hall, which has been used for meetings and social gatherings for many years.

The pastor, Father Augustus Puleo, discovered repair work would cost $1.6 million, a daunting sum to raise in the working-class area of eastern Norristown.

But he worked at the problem and started seeking help from parishioners, parish alumni who had once worshipped at the church, the Norristown community at large and the Genuardi Family Foundation. His efforts came up to almost $1.1 million, according to Hanley.

That’s when Archbishop Nelson Perez, who had been speaking with Father Puleo, called Hanley and asked if the foundation could get involved to bridge the gap in funds.

Hanley got to work on the first goal of the $1.2 million needed to begin repairs.

As of mid-March, “through the generosity of several CFGP board members and fund holders, we’re closing in on $270,000,” raised in less than a week, said Hanley, who added the remainder of $400,000 will be needed in six months to conclude the project.

“I took this need to our staff and our board, on a conference call,” Hanley explained. “We thought the need was so compelling because this is a parish that everyone did everything they could to try and raise the money. They were truly helping themselves, and needed help getting over the goal line.”

That can-do attitude of St. Patrick’s is reflected in the varied ministries of the parish, including a health clinic, the Patrician Society which distributes food and other assistance to the needy, college preparation help for the young and the presence of the Missionaries of Charity next door to the church.

And all of it is available to the broader Norristown community, not only parishioners.

“They truly are one of the organizations that holds that community together,” said Hanley. “One of our core goals is the sustainability of our parish communities. So this (project) is near and dear to our mission.”

Interested donors can use this link to help St. Patrick’s.

The foundation also is supporting evangelization through its presentation of the Mass via livestream video each Sunday morning from the Cathedral Basilica of SS. Peter and Paul, Philadelphia.

Livestreaming the liturgy came about as a necessary response to the societal lockdowns from the COVID pandemic in March 2020. It has since become a Sunday tradition for many Catholics and a window into the Catholic liturgy for all people, but one not without cost.

The Stice Agency, a Horsham-based insurance agency with the Knights of Columbus, had underwritten the costs until February of this year. At that time the foundation’s began funding the livestream with a $20,000 grant for a year, according to Hanley.

The grant “supports bringing the Mass to people who aren’t able to attend Mass in person,” she said, and through the use of a small image of the CFGP logo on the screen, viewers are reminded of who is presenting the livestream.

“We wanted to reach a broader audience (and) it’s a great way to get CFGP’s messaging out to everyone every week,” Hanley said. “We encourage people to donate to that effort to keep the Mass going.”

Hanley also extended an invitation from the Catholic foundation to all parishes in the archdiocese seeking help with raising weekly offertory collections, increased stewardship in the parish, potential capital campaigns and more, with information at thecfgp.org.