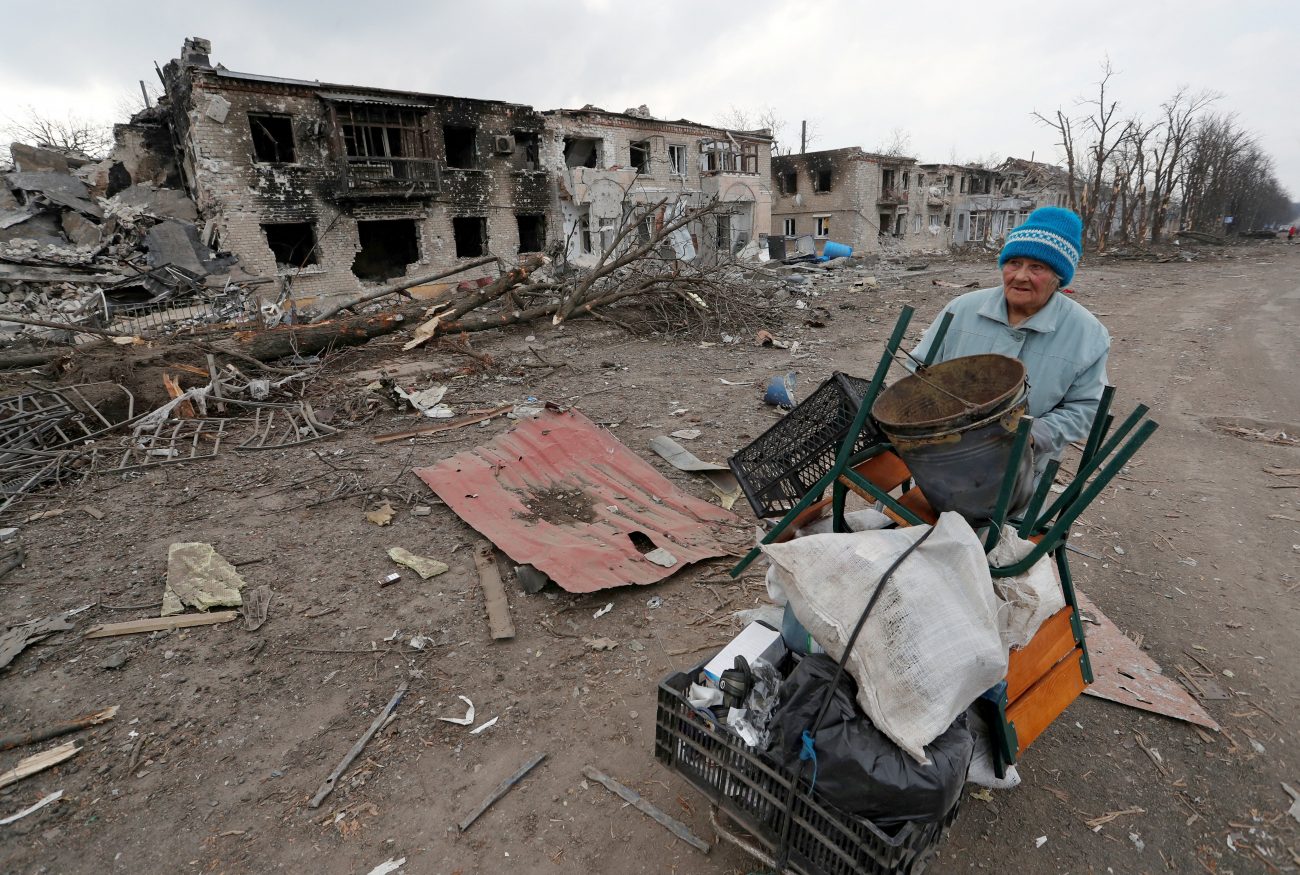 A woman pushes a cart with her belongings past buildings damaged during the Russian war in the separatist-controlled town of Volnovakha, Ukraine, March 15, 2022. (CNS photo/Alexander Ermochenko, Reuters)

As the Russian invasion of Ukraine enters its second month, the Philadelphia Archdiocese is gearing up to help resettle Ukrainian refugees, while encouraging parish collections for on-the-ground aid.

President Joe Biden announced March 24 the U.S. is ready to “welcome 100,000 Ukrainians to the United States with a focus on reuniting families.”

James Amato, secretary for archdiocesan Catholic Human Services, said his staff is “prepared and willing to assist with any immigration efforts that come forward” in the process.

“Most of those coming will be women and children,” said Amy Stoner, director of community-based, housing and homelessness services for archdiocesan Catholic Social Services (CSS).

Stoner and her team have long experience with refugee resettlement. Through a contract with the U.S. Conference of Catholic Bishops (USCCB), CSS has most recently been aiding some 110 Afghan evacuees — including a mother with newborn twins and an expectant mother — with basic necessities, housing, health care, case management, cultural orientation and employment.

As part of the initiative, CSS has been collaborating closely with agencies such as the Nationalities Services Center (NSC) and HIAS, and expects to do the same for Ukrainian refugees, said Stoner.

Both she and Amato noted CSS’s immigration legal services will play a key role in the effort, since many Ukrainian families already in the U.S. are seeking to sponsor relatives who are fleeing the war.

Days after the Russian invasion, the USCCB announced its annual collection for Aid to the Church in Central and Eastern Europe would be directed to Ukraine.

The fund is directly supporting humanitarian aid organizations and suffering church institutions in Ukraine: Caritas Ukraine (part of Caritas Internationalis, the universal church’s official humanitarian arm); the Ukrainian Catholic University, which has organized an emergency medical supplies program; the Ukrainian Catholic Church Curia in Kyiv; the Kharkiv Exarchate (church jurisdiction), located in a city particularly targeted by Russian forces; and the Ukrainian Greek Catholic Eparchies in Poland, to which about 2.3 million Ukrainian refugees have fled.

Archdiocesan collections for Ukraine should be sent to the Chancery Office (222 North 17th Street, Philadelphia, PA 19103), with checks made payable to the Archeparchy of Philadelphia and the words “Humanitarian Aid” in the memo line. Online contributions can be made via Paypal through the archeparchy website at ukrarcheparchy.us/donate.

“Our prayers go out to the suffering people of Ukraine,” he said.