On 14 college campuses, young adults are heard via synod 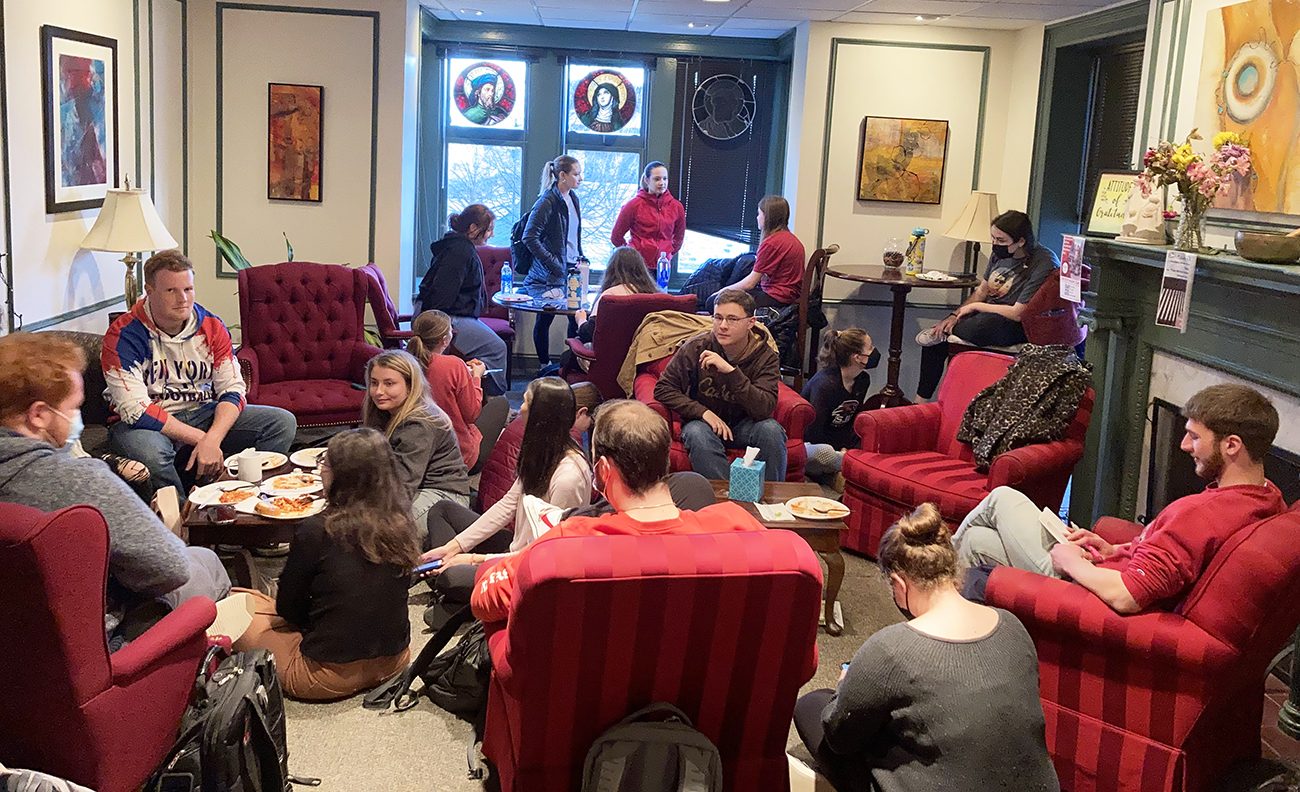 St. Joseph's University students share a meal in the Wolfington Center for Ministry, Faith, and Service on the campus before a listening session in February.

Fourteen colleges, universities and Newman centers in the Archdiocese of Philadelphia have answered Pope Francis’ invitation to participate in the global synod process, “For a Synodal Church: Communion, Participation, and Mission.”

Launched last October by the pope and ending with a gathering of the world’s bishops in Rome in 2023, the effort invites all people to listen to one another in service of the Christian mission in the world.

Pope Francis highlighted the role that colleges and universities play in the process of dialogue and listening that makes synodality possible.

“Catholic institutions of higher education are poised to contribute uniquely to the synod process because they create spaces of ownership, questioning and deepening for emerging young adults as they discern their voices and dream for a more just world while looking for their place in the church,” said Augustinian Father Kevin DePrinzio, vice president of Mission and Ministry at Villanova University.

Father Stephen DeLacy, vicar of Faith Formation with Youth and Young Adults in the Archdiocese of Philadelphia, believes Catholic colleges and universities “have talented, articulate and diverse leaders who understand the broader culture in a way that makes their insight invaluable to the church,” he said.

Through the process they will “provide us with a clear picture of what the church’s strengths and weaknesses are, as well as opportunities and threats to furthering the Gospel in our particular cultural context.”

The overwhelmingly positive response on the part of representatives from Philadelphia’s higher education communities indicates a desire to ensure that young people, particularly those on the margins of the church and in other faith traditions, have their pains and joys, their concerns and their hopes heard and included in this process.

“Too often our young people’s most common experience of church is of feeling unheard and unseen,” said Anna Ryan-Bender, director of Campus Ministry at Chestnut Hill College. “The synod offers us such a valuable opportunity to center and uplift student voices and dreams, to help college students have a tangible experience of church as a community of faith more than a geographical location or physical structure.”

“It is still the experience of many young people that the institution of the church is inaccessible and untouchable, and through the synod process we may be able to change those experiences,” said Emily Dorr a senior at La Salle University. “I think as our world becomes more connected, young people are more aware of what is happening across the globe and call for transparency in all levels of our universities, government and now the church.”

Between early February and early April, teams of “animators” — more than 40 faculty, staff and students who have been trained in how to design and facilitate synod listening sessions for their respective campus communities — hope to engage at least 300 college students across the archdiocese.

Campus engagement in the synod is taking on different forms:

— Chestnut Hill College is framing listening sessions as part of “mission week” in among campus communities;

— St. Joseph’s University is working within the structure of existing student groups to offer listening sessions;

— At La Salle University the synod team built a “Synod Week” around Ash Wednesday, in order to reach students on a liturgical feast that many disaffiliated Catholics still attend;

— Villanova created a short video explaining the synod process and inviting students to participate – a video that was promoted by the Vatican’s synod office.

“Here at the Penn and Drexel Newman Center, we are excited to participate in the synod process, together with the church around the world,” said Patrick Travers, director of the Catholic campus ministries at the universities. “In particular, it’s encouraging to partner with other Newman centers and Catholic college campus ministries here in the Philly area. College is such an important time in a young person’s life, and it’s great to be able to share in this mission with others who are working in the same ministry.”

Students are the key focus and Dorr is an animator for the process among her peers, including those who are disaffiliated from or have been hurt by the church.

“I tell my peers to get involved in this historical process because there has not been anything like it in our lifetime,” she said. “In addition, for those who are skeptical due to negative experiences they have had with the church or in their Catholic education, I would say to draw on these experiences through the synod instead of turning away from it.

“And for those who grew up Catholic but lack a sense of belonging in the church now I would encourage them to participate for their younger self who was in awe of God and all his goodness. Our voices will be heard, our stories will be documented and our community will be stronger.”

Student representatives from each institution who feel called to further engagement in the synod will help design an additional archdiocesan-wide student listening session at La Salle University on April 4 from 6 to 9 p.m.

Archbishop Nelson Perez will join the gathering along with a variety of leaders across the institutions — presidents, vice presidents of mission, and board members — to listen to them as they listen to each other about shared concerns and dreams for the church.

The group is already experiencing the fruits of a more synodal way of being church through collaboration, shared resources, a weekly newsletter and website, and a commitment to journeying together as a whole not only in the coming months but more importantly beyond.

Initial designs for the April 4 gathering at La Salle University, informed by what animators have already heard from students, will include opportunity for additional sharing and listening with each other and the archbishop, prayerful discernment for next steps and an interactive art installation.

“What we are doing as a local church, particularly as all of Catholic higher ed within the local Church of Philadelphia, is really exciting,” said DePrinzio of Villanova. “This process of listening together — and not as separate institutions but as institutions together — I believe will help us move into the future and do something new.

“In some sense, these institutions and the religious communities behind them really helped build the Church of Philadelphia. The charisms are still relevant and needed, and together can help move us into the future. Perhaps it’s the charisms working more intentionally together that will help get us there.”

In addition to sharing the findings of their campus sessions with Archbishop Perez to include in the archdiocese’s report to the worldwide synod, animators plan to share what they learn from students widely with campus administrators, with the other participating institutions of higher education in Philadelphia, with the Association of Catholic Colleges and Universities, and with the United States Conference of Catholic Bishops.

“The Holy Spirit is alive and active in this work,” said Ryan-Bender of Chestnut Hill College. “Every Catholic institution of higher education in our archdiocese (and then some) said ‘yes’ to this effort!”

“Hope is the key,” said Father DeLacy. “The church always needs hope at every moment.”

He believes Catholic colleges, universities and Newman Centers will “renew their vocation to bring God’s evangelical hope to the students they serve, our entire region and the whole world.”

Maureen O’Connell is associate professor of religion and theology at La Salle University in Philadelphia.