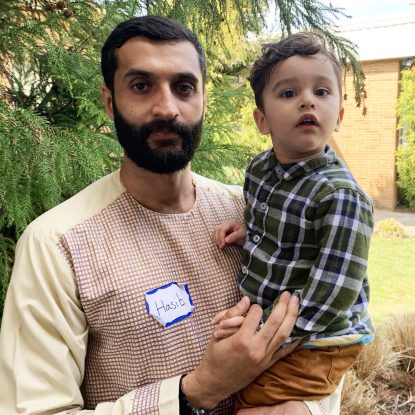 Hasib Nazary and his son Masih are among dozens of Afghan refugees being welcomed and resettled by archdiocesan Catholic Social Services, which held a March 19 luncheon for the group at St. John Chrysostom Parish in Wallingford. (Gina Christian)

On a sunny Saturday afternoon earlier this month, Hasib Nazary gently set his 2-year-old son Masih down to play on the lawns surrounding St. John Chrysostom Church in Wallingford.

The Delaware County parish is a long way from his native Afghanistan – some 7,000 miles, in fact. But Nazary and his family had little choice except to flee that nation, especially when U.S. troops withdrew in August 2021 and Taliban forces assumed control of the country.

“When Afghanistan fell into the hands of the Taliban, we saw a lot of bad things,” said Nazary. “They probably killed civilians, and all of the guys who worked with the (U.S.) army and … with foreigners, especially Americans, faced a lot of problems with the Taliban.”

Nazary himself had been a procurement logistics specialist, and he had previously worked with the United Nations High Commissioner for Refugees (UNHCR). Now a refugee in the U.S., he hopes eventually to earn a master’s degree and return to his initial profession, practicing law.

Along with his career aims, he has a still greater goal.

“We want peace,” he said. “Peace in our country and here. We want to live peacefully, without any turbulence, for the future of my kids.”

Nazary is among the nearly 6 million Afghans who have been forcibly displaced from their homes. The exodus constitutes what the Nazary’s former employer, the UNHCR, has termed “one of the largest protracted refugee situations in the world.”

Of that number, 3.5 million are internally displaced within Afghanistan itself; another 2.6 million, like Nazary, are living in other countries – the result of “more than 40 years of conflict, natural disasters, chronic poverty (and) food insecurity,” compounded by the COVID-19 pandemic, according to the UNHCR.

Now, Catholic Social Services (CSS) of the Archdiocese of Philadelphia is working to alleviate that anguish for dozens of refugees through its Afghan Placement and Assistance Program.

“We have all come together to support individuals and families, especially our young mothers,” said Amy Stoner, CSS’s director of community-based, housing and homelessness services.

Through a partnership with the U.S. Conference of Catholic Bishops, CSS has welcomed 108 Afghan evacuees — including 14 families, a mother with newborn twins and an expecting mother — since December 2021.

The refugees have been approved for entry under Operation Allies Welcome, which grants what is called “humanitarian parole” to vulnerable Afghans, including those who assisted U.S. forces in Afghanistan.

“We guide them on what to do if there’s an emergency – how to call 911, how to say ‘I don’t speak English,’” said Stoner, whose staff also collaborates with HIAS (formerly known as the Hebrew Immigrant Aid Society) and the Nationalities Services Center in resettling the Afghan arrivals.

CSS ensures refugees access a full range of benefits through the agency’s affiliation with BenePhilly, which streamlines applications for low-income city residents. Pro bono counsel for the refugees is available through CSS’s immigration legal services.

The refugees also receive SEPTA Key cards, enabling them to use public transportation, as well as Chromebooks “so they can do telehealth (appointments), apply for jobs online and communicate,” Stoner said.

The U.S. State Department’s Reception and Placement program allocates one-time payments to enable refugees to “hit the benchmarks of being self-sufficient” within their first 90 days, said Stoner.

Despite the funds, donations are critical to the CSS resettlement initiative, especially to subsidize the cost of food and household items, she said.

On March 19, that parish hosted a welcome luncheon for those in the CSS Afghan refugee placement program. The afternoon program included music, poetry readings, children’s activities and an array of traditional Afghan foods.

Some three years earlier, the parish had independently supported a mother and daughter from Eritrea, and when Afghan refugees began arriving after the U.S. evacuation, members launched “a collection of money and goods,” he said.

Father Hallinan said the parish focused on “directing the money to CSS” after “hearing about the great work (the agency) is doing in resettling folks from Afghanistan.”

The March 19 luncheon showed “how welcoming we are as a church and as a country,” said Amato. “It’s building up our communities, and it’s building us up as Catholics.”

The event also served as an opportunity for “encounter and relationships,” said Mary Chollet, director of ministry and communications at St. John Chrysostom. “People have to care for one another on a one-on-one basis, or it will just be (about) writing checks. … And then once you start talking to (those in need), it just becomes like helping out somebody in your family.”

‘Since I was born, it was war and explosions’

For Afghan refugees, such conversations reveal deep scars from the horrors of relentless war.

“As far as I know, it’s been 50 years of fighting,” said Azim Naderpoor, a Kabul native whose Swarthmore-based restaurant Aria catered the March 19 luncheon. “Daesh, Al Qaeda, Taliban – it’s so many groups, you don’t know which one is which.”

Now in the U.S. for the past three decades, Naderpoor sees little change for the better in Afghanistan.

“I was 7 years old, and I would wake up in the morning … (with) planes flying, shooting, bomb squads, suicide (bombers),” he said. “There’s no law in Afghanistan. There’s no police; everybody’s Taliban, and they just stop everybody, searching and beating them up.”

Maryam Mohibby, 18, who arrived in the U.S. only months ago, said she still suffers from “trauma, anxiety and insomnia” over the violence she witnessed in Afghanistan.

“Since I was born it was war and explosions. I lost friends, I lost classmates in explosions,” said Mohibby, who cannot recall a time when Afghanistan was not embroiled in armed conflict. “They were killed and we could not even find their body pieces.”

A television and stage actress, Mohibby – who now works at Aria and helped to cater the welcome luncheon – narrowly escaped a similar fate.

“I was three minutes from a place where an explosion happened, and I lost a friend (in it),” she said. “I know people try to understand, but experiencing it is another thing.”

Bridging that gap by extending both compassion and practical support to refugees is what CSS, parishes and individual faithful are called to do, said Father Hallinan.

“What you see in them, you hopefully see in Christ,” he said. “And you go from there.”

NEXT: On 14 college campuses, young adults are heard via synod