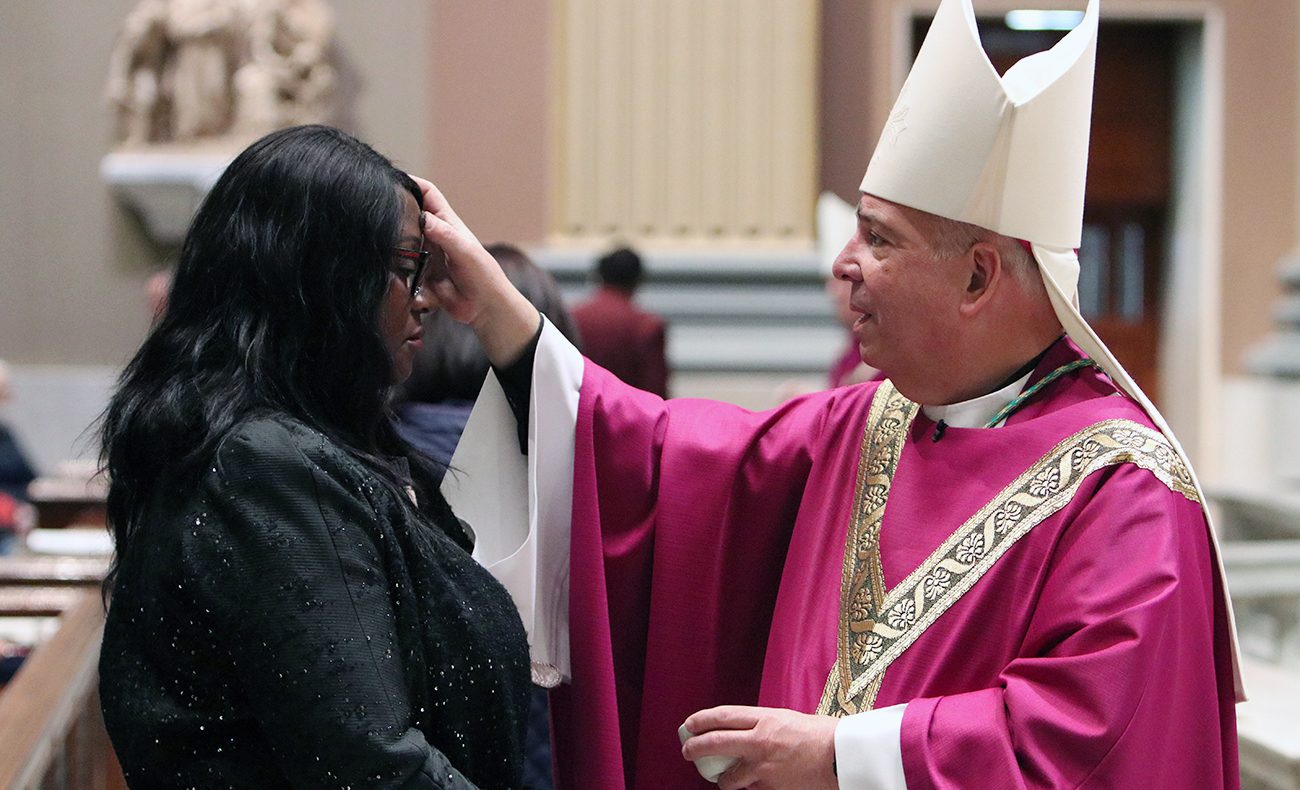 Archbishop Nelson Pérez distributes ashes during a midday Ash Wednesday Mass March 2 at the Cathedral Basilica of SS. Peter and Paul, Philadelphia. The archbishop concelebrated the liturgy with several Ukrainian Catholic clergy, saying the Lenten season had begun with "heavy hearts" over the Russian invasion of Ukraine. (Photo by Sarah Webb)

Faithful in the Philadelphia Archdiocese have begun the “rich and blessed season of Lent” with “heavy hearts” from the war in Ukraine, said Archbishop Nelson Pérez.

The archbishop was the principal celebrant and homilist at a noontime Ash Wednesday Mass March 2 at the Cathedral Basilica of SS. Peter and Paul.

“Today we are blessed to have with us three of our Ukrainian brother priests, (whom) I had the pleasure of praying with on Sunday afternoon,” said Archbishop Pérez, referencing a Feb. 27 vespers service hosted by the Cathedral of the Immaculate Conception, with Archbishop Borys Gudziak, metropolitan of the Ukrainian Catholic Archeparchy of Philadelphia, presiding and members of the Religious Leaders Council and Interfaith Philadelphia in attendance.

Archbishop Pérez offered the Ash Wednesday liturgy “for the people of Ukraine, there and here,” as part of a “Day of Fasting for Peace for Ukraine” announced by Pope Francis, who prayed “the Queen of Peace (would) preserve the world from the madness of war.”

This Lenten season “finds the world (amid) atrocities being committed,” leaving millions “horrified … of what we human beings are actually capable of,” said Archbishop Pérez. “After so many millennia, we just don’t learn.”

Speaking after the Mass, Father Borovyi said “in Ukraine there are a lot of ashes nowadays, and not just symbolic. … ashes from hospitals, from universities, from cities that are already bombed. And these ashes are mixed with blood, with tears.” 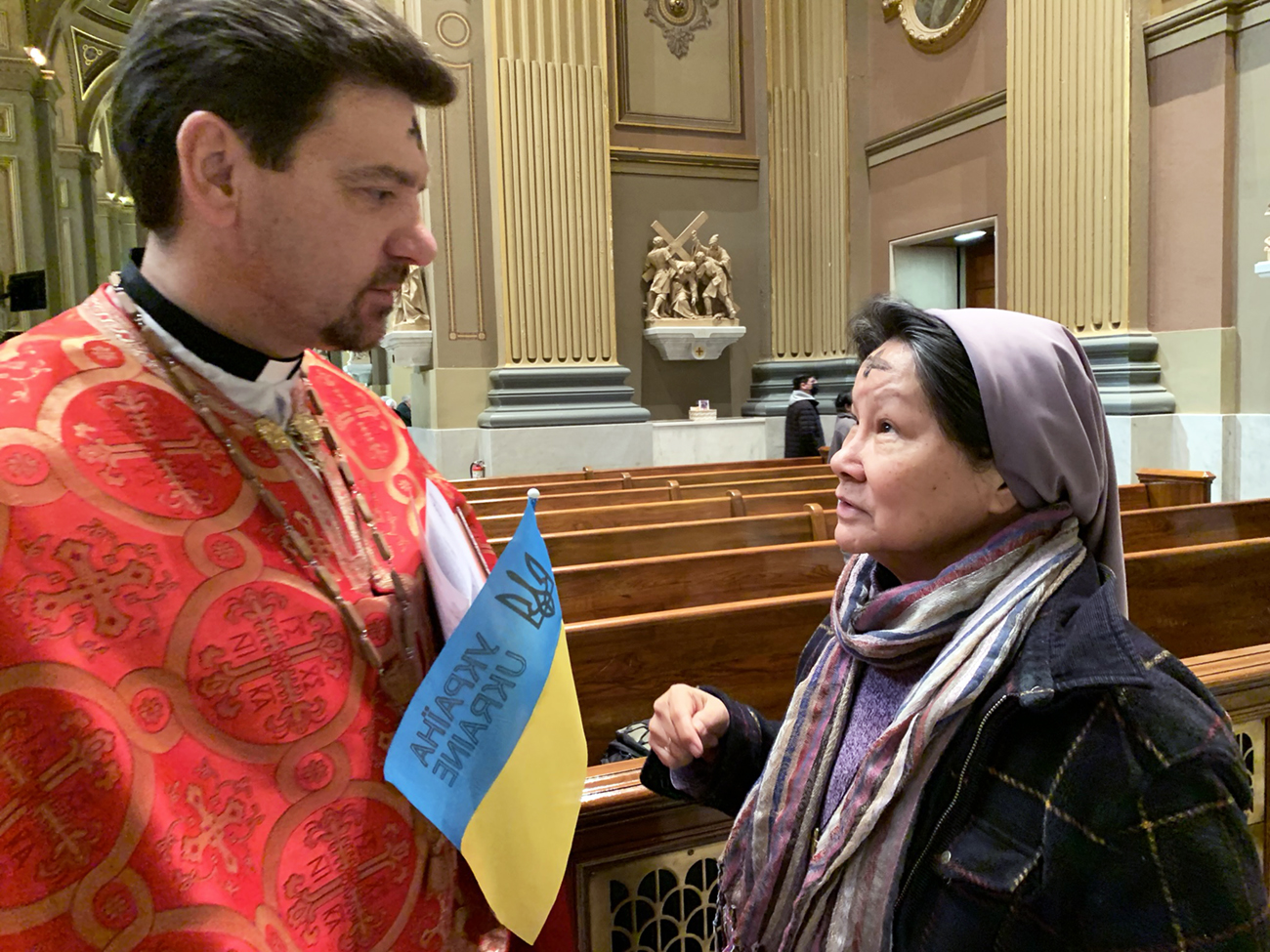 Father Roman Pitula, rector of the Ukrainian Catholic Cathedral of the Immaculate Conception in Philadelphia, speaks with Sister Gertrude Borres, R.S.A. after a midday Ash Wednesday Mass at the Cathedral Basilica of SS. Peter and Paul. (Gina Christian)

Father Pitula said his extended family, whose members live near the western city of Lviv, are “distressed” but trying to remain “hopeful” amid frequent trips to their basements to shelter in place.

“It’s tragic,” he said. “We are a God-loving and peace-loving nation. We never invaded anyone over our 1,500-year-history. We want this war to be stopped immediately. If one person dies, it’s already too many.”

Amid the Lenten season and its disciplines of prayer, fasting and almsgiving, Christians and all people of the world are “united in solidarity and prayer for the people of Ukraine,” said Archbishop Pérez.

Quoting author Tony Agnesi, the archbishop said “there is power in those ashes” of Lent.

“I hope God … really gives power to those ashes, that Ukraine could stand against the Russian enemy,” he said. 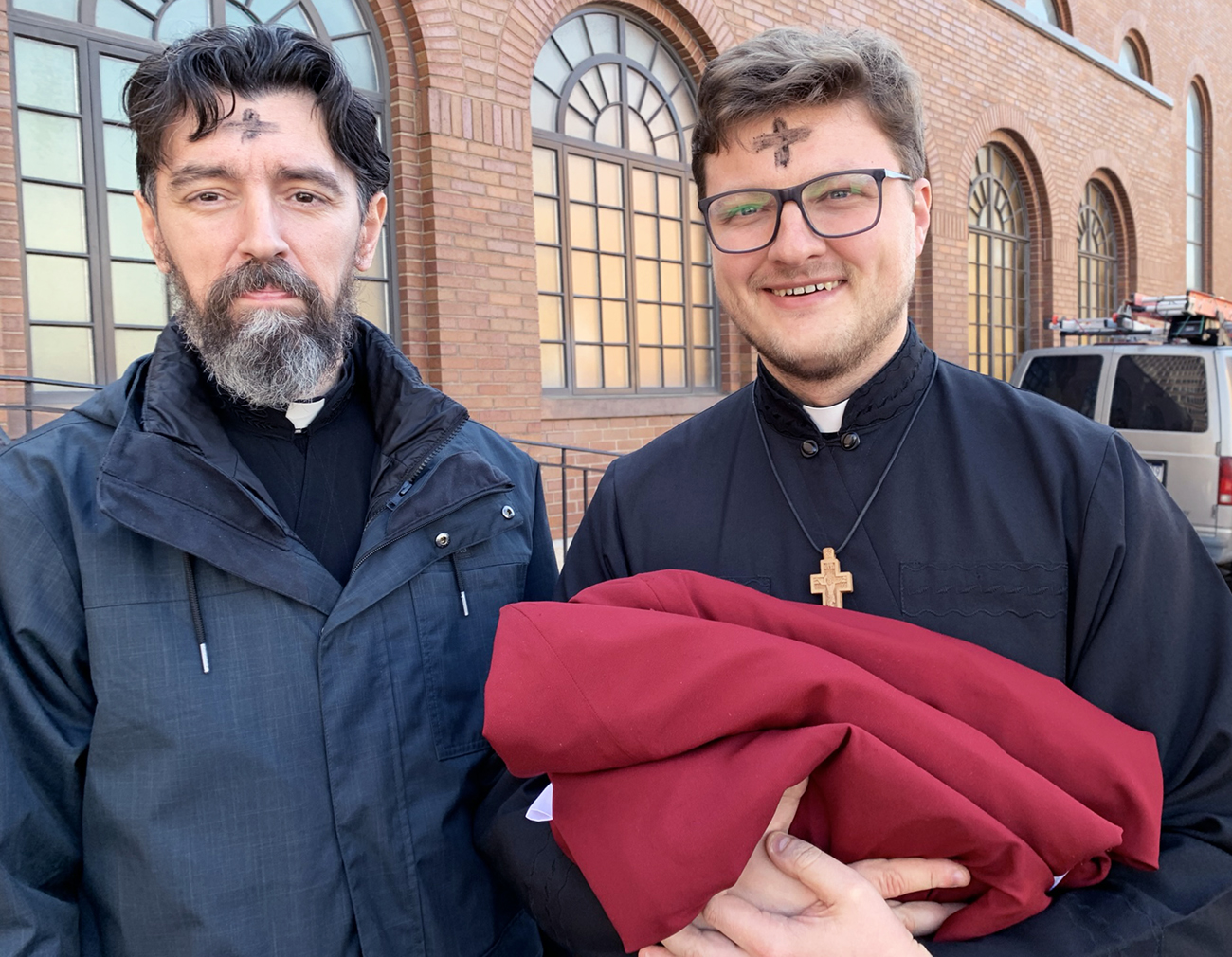