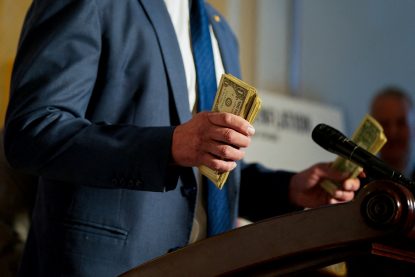 A senator on Capitol Hill in Washington holds bundles of cash during a Republican news conference about inflation Feb. 16, 2022. (CNS photo/Elizabeth Frantz, Reuters)

WASHINGTON (CNS) –- The chairmen of several U.S. bishops’ committees and the head of March for Life March 11 praised the U.S. senators who voted to pass the government’s omnibus bill with the Hyde Amendment and other pro-life provisions included in it.

The bishops also commended lawmakers for including “critical humanitarian assistance for the victims of Russia’s invasion of Ukraine.”

In a 68-31 vote late March 10, the Senate OK’d a $1.5 trillion government funding bill that includes $13.6 billion in aid to Ukraine. The House passed the measure a day earlier. It will now be sent to President Joe Biden for his signature.

To avoid a government shutdown, both chambers also passed a four-day stopgap measure to extending current funding levels through March 15 in case the massive bill was not passed.

The 2,741-page text was released around noon March 9, leaving many lawmakers complaining they had little time to review the measure before having to vote. The measure was “the product of months of negotiations,” as CNN reported.

“We applaud Congress for including provisions in the omnibus appropriations package that uphold the sacred dignity of human life and will support and assist many vulnerable people here and abroad,” said the chairmen of five U.S. Conference of Catholic Bishops’ committees in a joint statement.

“In particular, we are grateful that Congress has maintained long-standing, bipartisan, and lifesaving provisions including the Hyde, Helms and Weldon amendments that prevent our tax dollars from paying for the tragedy of abortion and protect people from having to participate in abortion against their consciences,” they said.

The bishops also noted the final measure covers “improvements to maternal health care, investments that will support refugees and other vulnerable migrants.”

Jeanne Mancini, president of March for Life, applauded “the pro-life senators who successfully fought and voted to maintain all legacy pro-life riders.”

“While this bill still sends far too many of our tax dollars to abortion businesses like Planned Parenthood, these pro-life riders will continue to save lives,” she said in a statement.

“In fact, the Hyde Amendment alone has been estimated to have saved more than 2.4 million American lives,” she added, “and a consistent majority of Americans say they don’t want to be forced to pay for this life-ending procedure.”

The Hyde Amendment first became law in 1976 to prohibit federal funds appropriated through the Labor Department, the Health and Human Services Department and related agencies from being used to cover abortion or fund health plans that cover abortion except in cases of rape, incest or when the life of the woman would be endangered.

It has been reenacted in spending bills every year since it was first passed.

The Helms Amendment — which has been called “the Hyde Amendment for the rest of the world” — has prohibited using U.S. taxpayer funds to directly pay for abortions in other countries since 1973. It was passed in the wake of the Roe v. Wade decision handed down by the Supreme Court that year to legalize abortion nationwide.

The Weldon Amendment has been included in the annual appropriation for Health and Human Services since 2005. It allows health care providers as well as insurance plans to refuse to provide abortions, pay for them or refer women to abortion clinics.

CNN reported that a group of Democrats who object to these pro-life provisions wanted them stripped from the final bill, but they failed in the effort.

In their joint statement, the USCCB committee chairman praised other parts of the omnibus bill, such as increased spending for affordable housing and food security and environmental provisions including climate resilience and PFAS remediation.

“PFAS” stands for polyfluoroalkyl substance, which are widely used, long-lasting chemicals whose components break down very slowly over time.

“Finally,” the bishops said, “we welcome the inclusion of provisions that address the unique vulnerability of pregnant and postpartum mothers impacted by the U.S. immigration system, as well as critical services for other at-risk populations.”