50 years ago, Mighty Macs learned to live their faith on life’s courts 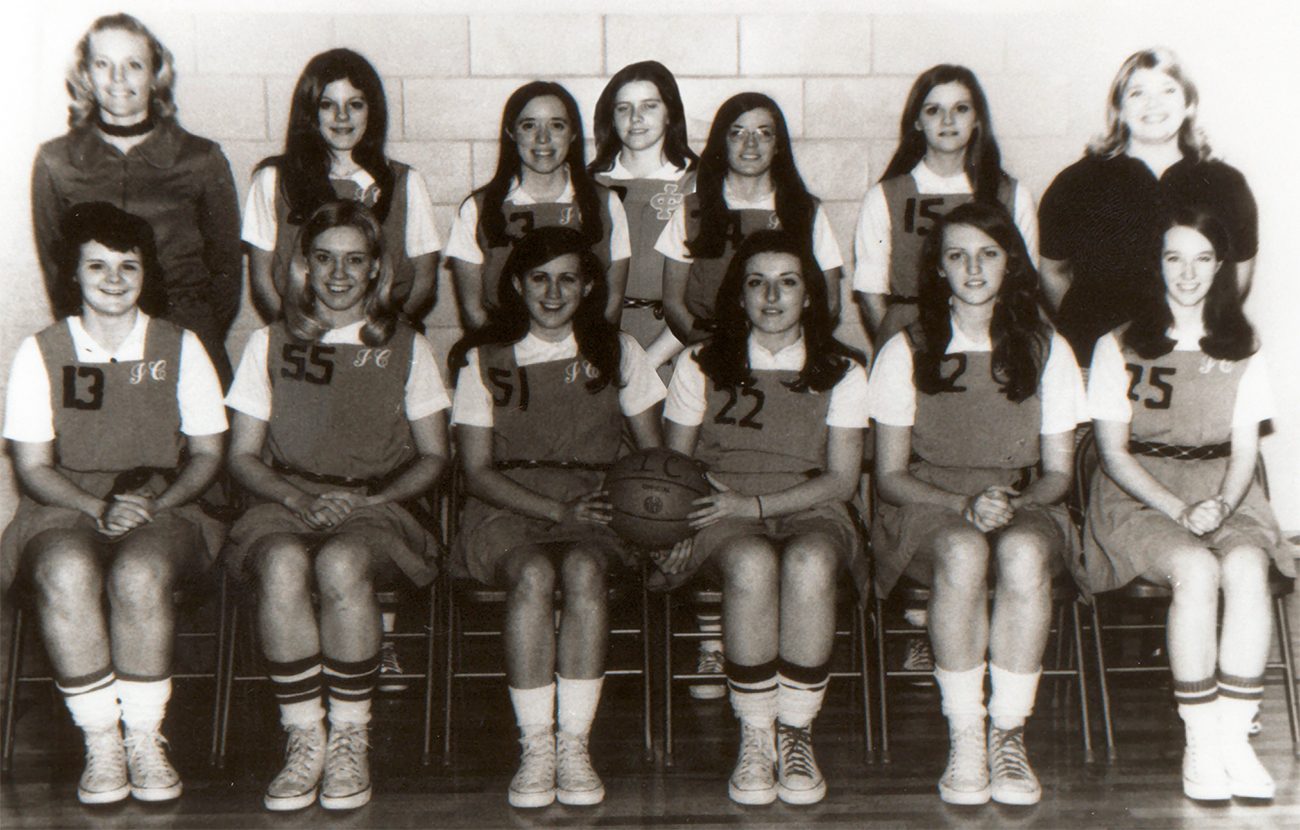 O God of Players, hear our prayer
To play this game and play it fair,
To conquer, win, but if to lose
Not to revile nor to abuse
But with understanding start again,
Give us the strength, O Lord. Amen.

Because the team prayed, they knew that whether they won or lost, that’s what was meant to be, according to the late Mary Scharff (class of 1977), who spoke with Julie Byrne, author of the 2003 book by Columbia University Press “O God of Players,” about the Mighty Macs’ championships.

The Mighty Macs’ rise to national champions was a true David-versus-Goliath story. In 1972 Immaculata University was a small women’s college in suburban Philadelphia, whose gym burned to the ground years before; it had no physical education department. The players wore wool tunics and drove themselves to games.

To fund their trip to the championship tournament, they had to sell toothbrushes. And then, only eight of the 11 players could go — flying standby.

Sister Mary of Lourdes, I.H.M., who was president of Immaculata when the Mighty Macs won their first of three national championships, acknowledged that school spirit and hard work were influences in being able to bring home the title.

“But,” she said at the time, “I think prayer really did it.”

In 1974 Immaculata was on a 35-game winning streak. It came to a crushing end on Ash Wednesday when Queens College broke the streak with a one-point win.

After two consecutive national championships, the Mighty Macs and their fans were accustomed to winning. The loss hurt.

However, when the team returned to campus that night, they were surprised to find the Rotunda at Immaculata filled with students and Immaculate Heart of Mary Sisters, showing their support for the hard-fought battle and for their friends, classmates and students.

“It was the best game we never won,” said Sister Roseanne Bonfini, I.H.M., who served as Immaculata president from 1992-2002 and attended Mighty Mac home and away games.

The players remember the presence of the IHM Sisters at their games.

Marianne Stanley, class of ’76, acknowledged their opponents while telling ESPN in 2010, “That’s gotta be a really intimidating thing if you’re a Catholic, because you can appreciate all these nuns are praying against you and for us.”

The Immaculatan student newspaper referred to the traveling I.H.M. Sisters as the “rosary-rooters,” and several famous photos and newspaper articles depict the fervor of the sisters’ devotion to the young basketball players.

Even if the Mighty Macs didn’t understand how their faith helped them in the moment, they do now. Martelli attended Catholic grade school at St. Dorothy’s in Drexel Hill, then Villa Maria Academy, but she was not set on attending a Catholic college.

Once she arrived as a freshman at Immaculata, however, Martelli went to Mass before home games as often as she could and was grateful that a priest often traveled with the team to celebrate Mass while away from campus.

“My faith played a part in how I coped with issues during my college years, but I think I realized that as I got older. It would help me focus and gave me a sense of calmness and peace,” Martelli said. “The older I get, I see how much my faith has played a part in my life.”

Martelli acknowledged that the I.H.M. Sisters at Immaculata were strong, intelligent, independent women of faith who implored the Mighty Macs to use their talents and to give back when they could.

This mantra was instilled in Denise Conway Crawford, a 1974 graduate, from a young age. As a player on all three national championship teams, she grew up in a family where faith was important, and she was taught to use her God-given talents and trust that God would take care of the rest.

“I don’t think we felt the same pressure that teams feel today,” she said. “As we started to see more and more success, we were nothing but grateful to God for putting us in the position we were in to see such success.”

That success extended beyond the court. The 18 women who played on the three national championship teams were majors in math, economics, biology, sociology, psychology, Spanish and French who went on to become professional and collegiate basketball coaches, doctors, teachers, philanthropists and businesswomen.

The late Sister Marie Lorraine Bruno, I.H.M., taught French to many of the players and often traveled with the team. She recalled when Theresa Shank Grentz (class of 1974) was at the foul line in the final seconds of an important playoff game. If she made the jump shot, Immaculata won; without that score the game remained tied.

Sister Lorraine said that during that tense moment, “I know there were many telephones ringing in IHM convents asking the sisters for prayers, because there was a lengthy discussion between the officials: was the shot before, during or after the buzzer? The decision: before. Thus, championship!”

Interviewed after their first championship title game, held at Illinois State University, coach Cathy Rush said the players had a tremendous amount of desire and self-motivation. “Of course,” Rush added, “being with a Catholic college, it helps to have a lot of prayer, too.”

Crawford wasn’t afraid to show her faith. She and her teammates would often make the sign of the cross while standing at the foul line for a free throw. The team also prayed the rosary on the bus to games.

Janet Eline, also class of ‘74 remembered when the sisters gave each player a pin of the Blessed Virgin Mary, patroness of Immaculata. The Mighty Macs wore the pins on their uniforms during games until officials informed them that jewelry was prohibited.

Undeterred, Eline simply pinned hers to the hem of her jersey, so it wasn’t visible. “That small gesture was huge to our team,” she said. “It was given to us by our biggest fans, the nuns. They were truly with us on the court while we played.”

“To the public, our Cinderella story was a kaleidoscope of sweet and innocent simplicity. Toothbrush sales and the good sisters banging on buckets at the games made for good reading,” said Grentz. “But between the classes and basketball there was much more. There was a prayer life. There was a perspective, leadership and integrity in everyday lessons. To us, it was our Camelot.”

The current women’s basketball team, coached by 2013 Immaculata graduate Christine Rhine, are continuing the legacy. Not only do they say a prayer before every game, they also went 17-8 during the regular season and won the Atlantic East Conference title.