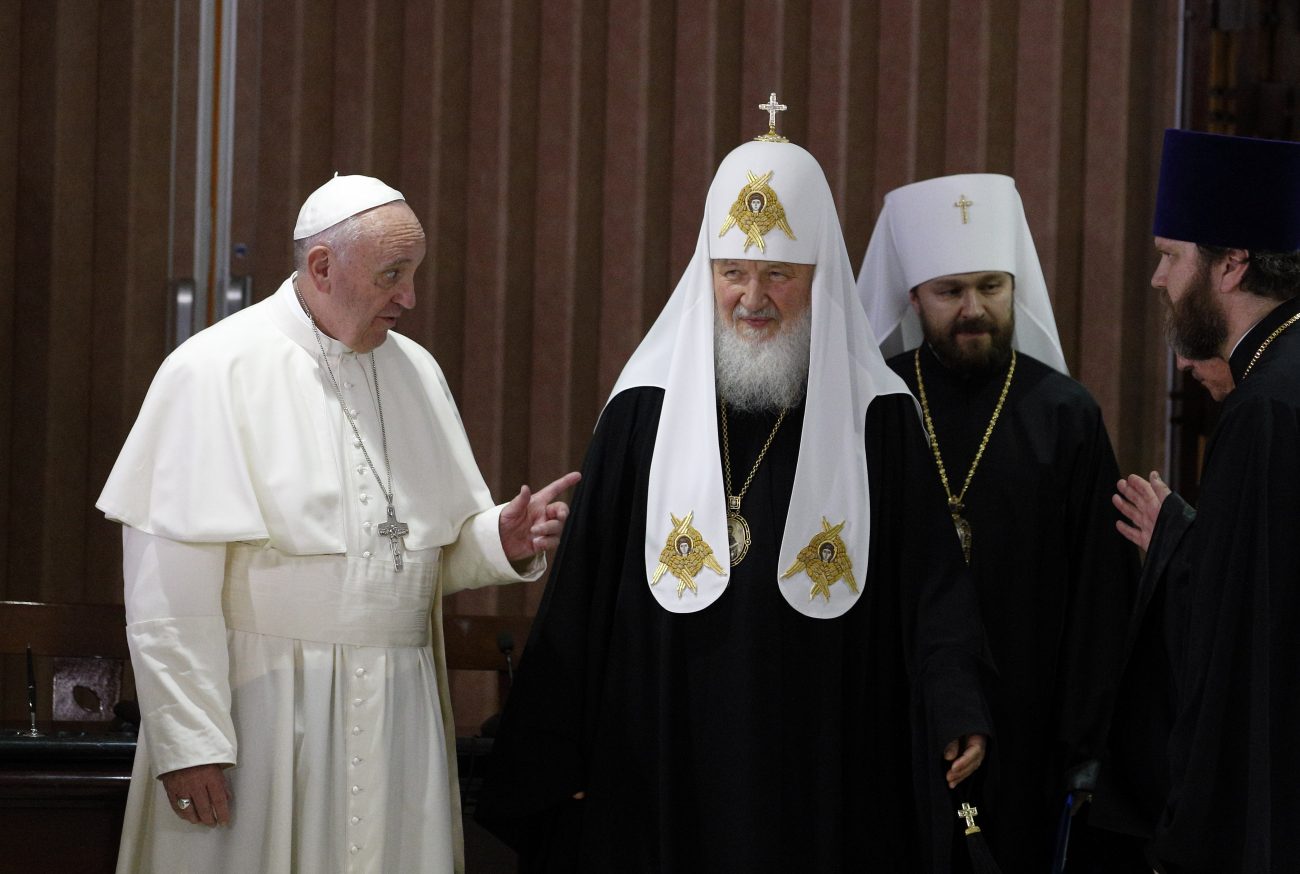 Pope Francis stands next to Russian Orthodox Patriarch Kirill of Moscow after the two leaders signed a joint declaration during a meeting at Jose Marti International Airport in Havana Feb. 12, 2016. (CNS photo/Paul Haring)

VATICAN CITY (CNS) — Catholic and Orthodox leaders in Europe have appealed to Russian Orthodox Patriarch Kirill of Moscow, urging him to convince Russian President Vladimir Putin to put an end to the bloodshed in Ukraine.

Meanwhile, Patriarch Kirill met March 3 with Archbishop Giovanni D’Agnello, the Vatican nuncio to Russia, according to a statement from the patriarchate.

Neither the Vatican press office nor the nunciature provided information about the meeting; the patriarchate’s description of it focused on values the Catholic and Orthodox churches share and on Patriarch Kirill’s fond memories of meeting Pope Francis in Havana in 2016.

Patriarch Kirill “pointed out that the Holy See’s moderate and wise position on many international issues corresponds to the position of the Russian Orthodox Church,” the patriarchate’s statement said. “‘It is very important that the Christian churches, our churches among them, should not become, willingly or unwillingly, sometimes without any will, participants in those complex, contradictory and struggling tendencies that are present today in the world agenda,’ Holy Patriarch Kirill emphasized,” it added.

“‘We try to take a peacemaking stance, including in the face of existing conflicts,’ he said, because the church cannot be a party to a conflict, it can only be a peacemaking force,'” the statement quoted the patriarch as saying.

In an open letter published March 2, Romanian Orthodox Father Ioan Sauca, acting general secretary of the World Council of Churches, told Patriarch Kirill that he received numerous letters asking him to “approach Patriarch Kirill to mediate so that the war can be stopped and the suffering ended.”

“In these times of hopelessness, many look to you as the one who could bring a sign of hope for a peaceful solution,” Father Sauca wrote.

“I write to Your Holiness as acting general secretary of the WCC but also as an Orthodox priest,” he said. “Please, raise up your voice and speak on behalf of the suffering brothers and sisters, most of whom are also faithful members of our Orthodox Church.”

Polish Archbishop Stanislaw Gadecki of Poznan, president of the Polish bishops’ conference, echoed Father Sauca’s sentiments, calling on the Russian patriarch “to appeal to Vladimir Putin to stop the senseless warfare against the Ukrainian people.”

In the letter published by the Polish bishops’ conference March 2, Archbishop Gadecki also called on Patriarch Kirill to urge Russian soldiers “not to take part in this unjust war, to refuse to carry out orders which, as we have already seen, lead to many war crimes.”

“Refusing to follow orders in such a situation is a moral obligation,” the Polish archbishop wrote.

German Cardinal Reinhard Marx of Munich and Freising had appealed publicly to Patriarch Kirill during a Feb. 27 liturgy at the Ukrainian Catholic cathedral in Munich.

“I implore the patriarch of Moscow to exert his influence on this president so that the war can be ended, so that the weapons can be laid down,” Cardinal Marx said.

Bishops, he added, are not politicians, “but we have the mission and the duty to proclaim the Gospel of peace, especially to those who think they can use violence and terror to achieve political goals.”

Although he has prayed for the safety of civilians and a quick end to the fighting, Patriarch Kirill has been criticized for his close relationship with Putin and his lack of support for Ukrainian independence and territorial integrity.

At a divine liturgy in Moscow Feb. 27, three days after Russia launched its invasion, Patriarch Kirill said, “We must not let dark and hostile external forces laugh at us; we must do everything to maintain peace between our peoples and at the same time protect our common historical fatherland from all outside actions that can destroy this unity.”

The statement prompted an immediate response from Orthodox Metropolitan Epiphanius of Kyiv, head of the independent Orthodox Church of Ukraine, who said the Russian patriarch seemed more concerned with “keeping Putin and the Russian leadership engaged” than taking care of the Ukrainian people, “some of whom considered you their shepherd before the war.”

“Therefore, it makes no sense to ask you to do anything effective to make Russia’s aggression against Ukraine stop immediately,” he wrote.

Nevertheless, Epiphanius wrote that if the Russian patriarch could not speak out against the invasion, he should at least help facilitate the return of the bodies of “more than 3,000” Russian soldiers who “paid for the ideas of the ‘Great Russia’ with their lives.”

“May the Lord give you spiritual strength at least for this, especially today, Sunday, when we remember the Last Judgment!” he wrote Feb. 27.

The bishops’ synod of Ukraine’s other Orthodox church, which is in full communion with Patriarch Kirill and the Russian Orthodox Church, also pleaded with the patriarch to “call on the leadership of the Russian Federation to immediately stop hostilities that are already threatening to turn into a world war,” according to the website of Ukraine’s Union of Orthodox Journalists.

Addressing both Putin and Ukrainian President Volodymyr Zelenskyy, the synod asked them to “do everything possible to put an end to the sin of armed confrontation between our two fraternal peoples and start the negotiation process.”

“This terrible war has already dealt a heavy blow to relations between the Ukrainian and Russian peoples. If the bloodshed is not stopped, the gap between our peoples may remain forever,” the statement said.

The bishops’ synod encouraged the people of Ukraine to remain united in the hope that “common sense will prevail and this war will end soon.”

“Only in unity is our strength,” the statement said. “We pray the Lord to enlighten the rulers with the light of his grace. We believe that the merciful Lord will accept our prayer work and forgive us our sins. And in the near future, the peace of God will once again reign in our blessed Ukrainian land!”

PREVIOUS: ‘My place is here,’ says pope’s representative in Ukraine