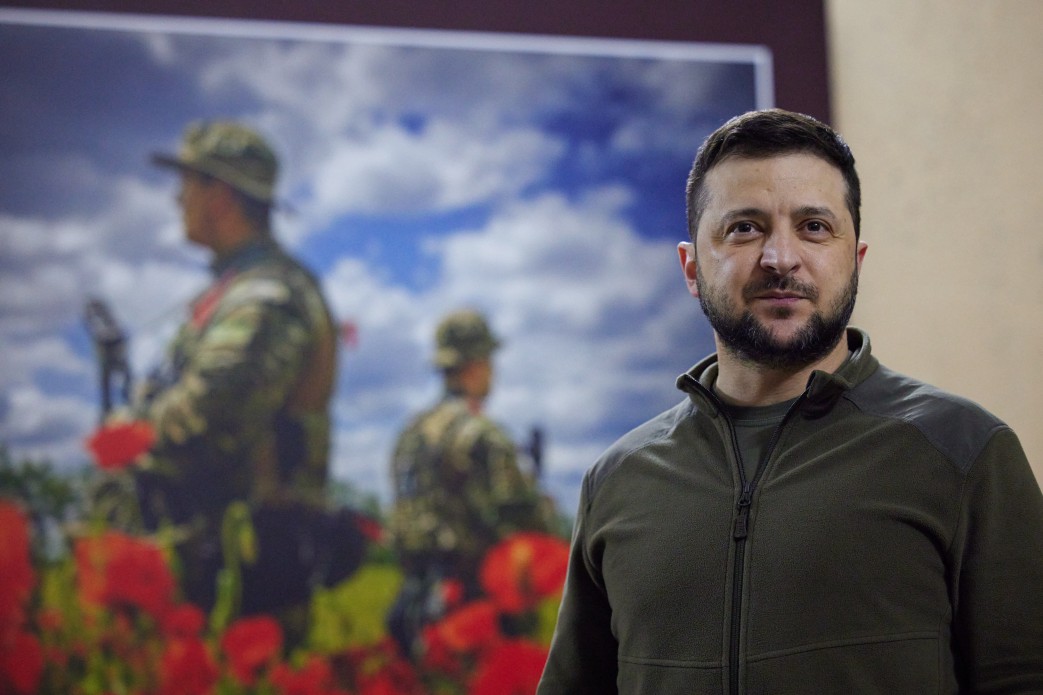 Ukrainian President Volodymyr Zelenskyy, seen here in this March 26 photo, has received honorary doctorates from Manor College and 26 other colleges and universities in recognition of his efforts to defend Ukraine from a brutal invasion by Russia. (Volodymyr Zelenskyy/President of Ukraine)

A local Catholic college founded by Ukrainian women religious has teamed up with 15 other schools to confer honorary doctorates on Ukrainian President Volodymyr Zelenskyy.

Manor College in Jenkintown announced today it will award an honorary Doctor of Humane Letters degree to Zelenskyy, the first such degree for the school since its establishment in 1947 by the Sisters of the Order of St. Basil the Great.

Iryna Mazur, honorary consul of Ukraine in Philadelphia, will accept the degree at Manor’s May 12 commencement ceremony on behalf of Zelenskyy, whose leadership has garnered international acclaim since Russia launched a full-scale invasion of Ukraine Feb. 24.

According to an April 1 statement from Manor College, the schools’ collective decision to award the degrees “appears to be a globally unprecedented move” – one fitting for a head of state who himself has defied expectations.

Born in 1978, Zelenskyy initially forged a successful career in film and television, producing 10 feature-length movies and winning dozens of awards while earning a degree in law from Kyiv National Economic University.

He foreshadowed his political career with a starring role in the 2015-2019 Ukrainian television series “Servant of the People” (Sluga Naroda), a satire in which a frustrated high school teacher is elected president after his rant against government corruption becomes a social media sensation.

Elected in 2019, Zelenskyy has sought to advance his nation’s growth as a democracy, despite ongoing Russian opposition since Ukraine gained independence from the former Soviet Union in 1991.

In 2014, Russia annexed Ukraine’s Crimean Peninsula, with Russian-backed separatists proclaiming “people’s republics” in the eastern regions of Donetsk and Luhansk. Over the next eight years, clashes, shelling and sniper attacks became common in eastern Ukraine, resulting in an estimated 14,000 to 15,000 deaths and some 1.5 million internally displaced persons.

Since the Feb. 24 invasion, thousands of Ukrainians have died and more than 4 million — half of them children — have fled the country. Russian forces have targeted not only critical infrastructure and nuclear power plants, but also schools, maternity hospitals, residential areas, churches, civilian bomb shelters and humanitarian corridors.

Amid the globally condemned invasion, Zelenskyy has been resolute, defiant and utterly determined to preserve his nation, imploring heads of state, legislative bodies and religious leaders for support while rallying Ukrainians with daily video messages.

Within hours of the Russian invasion, the Ukrainian Embassy to Britain tweeted Zelenskyy had declined a U.S. offer of evacuation, saying, “The fight is here; I need ammunition, not a ride.”

That “depth, compassion and courage” in leadership, along with Zelenskyy’s “humanitarianism and care for Ukraine’s people” is “unparalleled in the contemporary world,” said Manor College president Jonathan Peri.

Throughout its 75-year history, the school has promoted its Ukrainian heritage through educational and cultural programs, and a month before the invasion issued a statement of concern regarding the buildup of Russian forces on Ukraine’s border.

During the past several weeks Manor formally denounced the war while calling for prayer, collecting some $50,000 in donations for humanitarian aid to Ukraine and creating a scholarship to assist Ukrainian refugee students.

Manor is also hosting weekly support groups for students grappling with anxiety over the war in Ukraine.

Peri and his fellow college and university presidents have invited other schools to honor Zelenskyy for his “heroism and … courageous efforts to preserve Western civilization,” said the Manor College statement.

Mazur described Zelenskyy as “a world hero who became a symbol of unity against Russian aggression” and a sign of “strength and (the) preservation of democracy.”

NEXT: Police ministry shows ‘behind the badge, there’s a human being,’ says archbishop