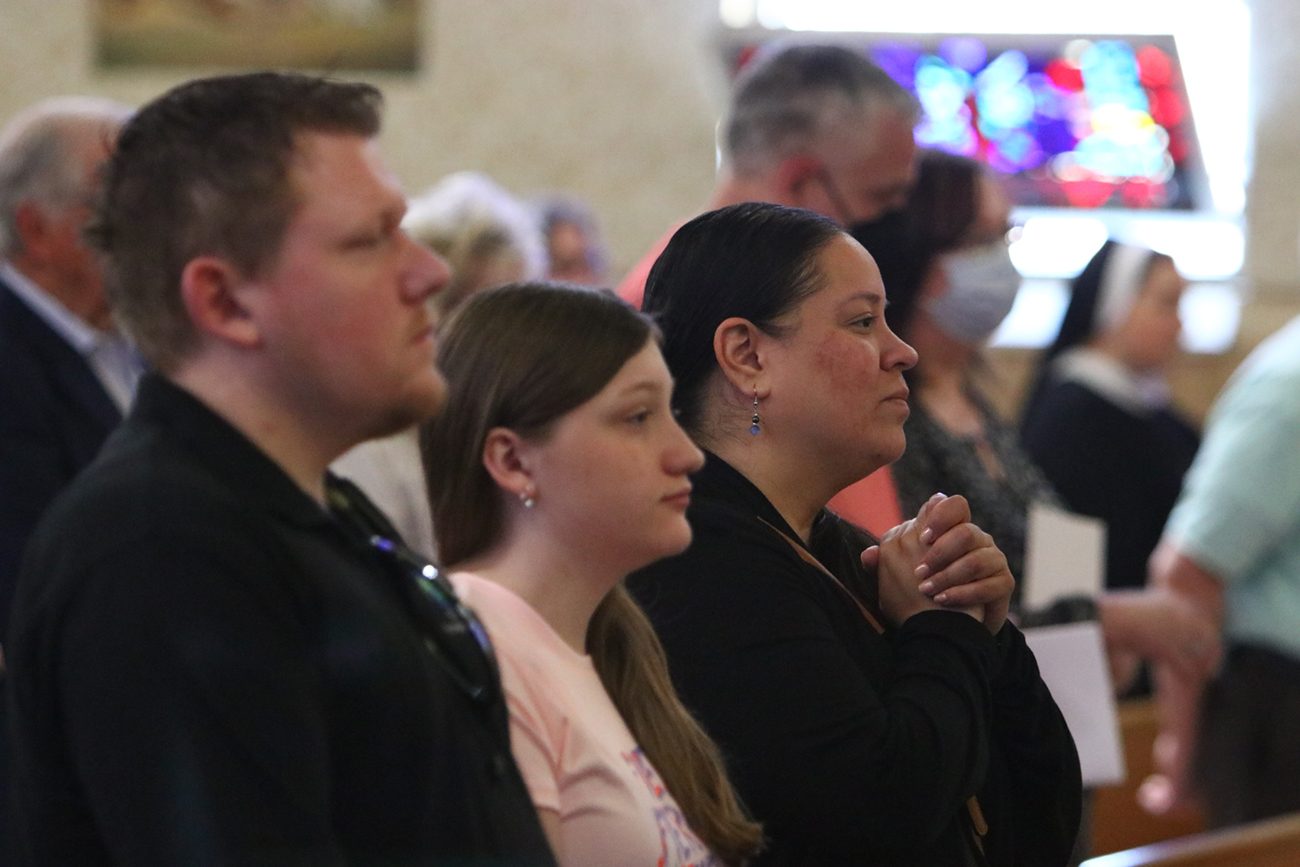 A Northeast Philadelphia parish is celebrating its 100th year – thanks to two saints, dozens of priests and thousands of parishioners who over the decades have given “a piece of their heart” to the community, said Archbishop Nelson Pérez.

The archbishop was the principal celebrant and homilist for an April 24 anniversary Mass at St. Katherine of Siena Parish in the city’s Torresdale section.

“You look good for 100 years old,” quipped Archbishop Pérez as he surveyed those who filled the pews.

The compliment proved true for parishioners Joseph and Dorothy Waldowski, who presented the liturgy’s offertory gifts: he’s 100, and Dorothy is close behind at age 96.

While it boasts many longtime members, the parish has “really balanced demographics” that also include “a lot of young families,” said pastor Msgr. Paul Kennedy, who concelebrated the liturgy.

The Regan family – Sean, Christine and their children Grace and Andrew – are one example, with Sean Reagan describing St. Katherine a “very thriving” parish in which he “loves to be involved.”

With 3700 registered families and 530 students enrolled in its school, St. Katherine counts in total “about 10,000 souls,” all in various stages of life and spiritual development, he said.

“I always tease the clergy office that they should send me a young priest, because he’s going to learn the family business here,” said Msgr. Kennedy. “We have weddings, funerals, baptisms, school children, seniors, Holy Family University across the street and a hospital nearby.” 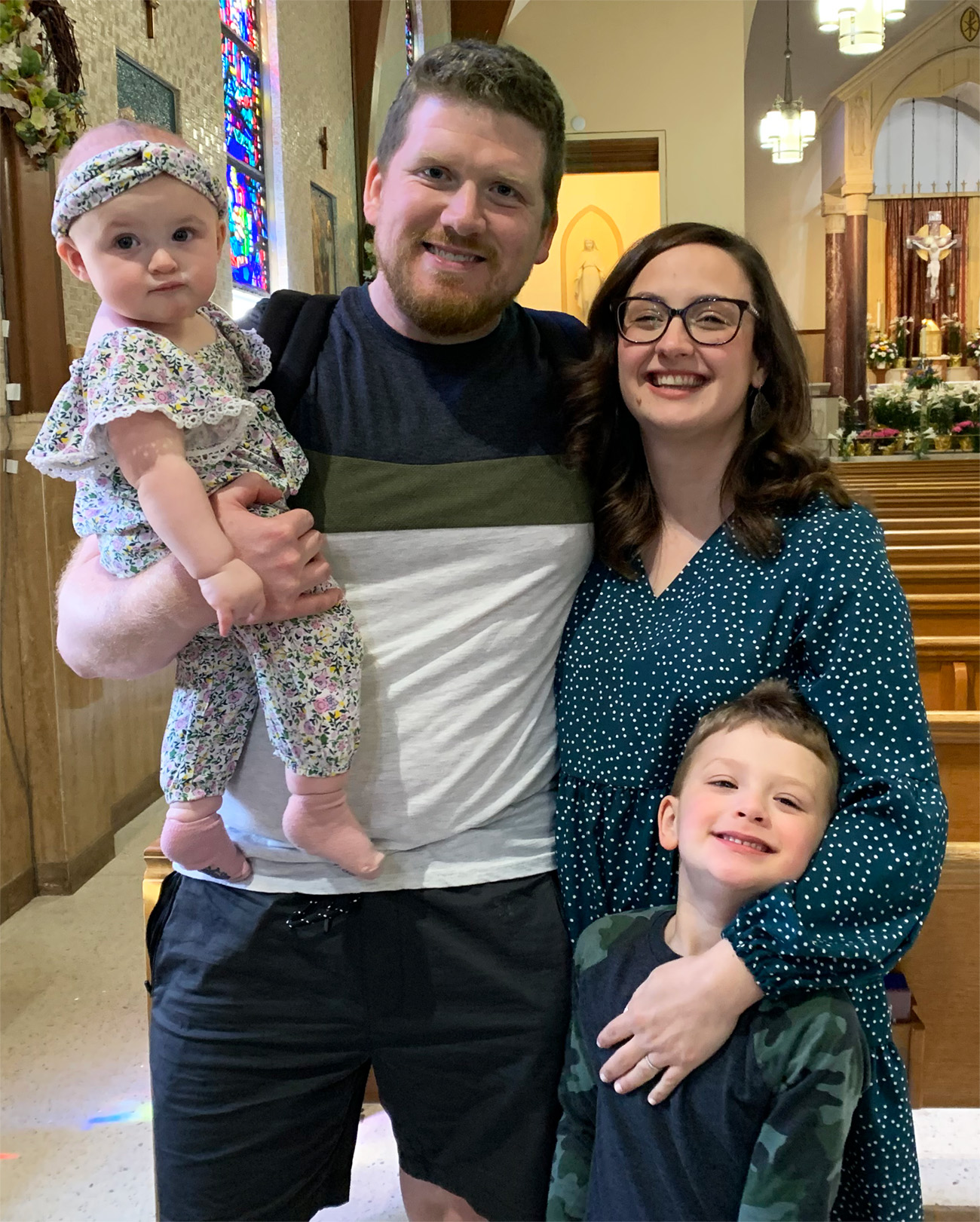 The Reagan family — Sean, Christine and children Grace and Andrew — are among a number of young families at St. Katherine of Siena Parish in Northeast Philadelphia. (Gina Christian)

In fact, the campus of Jefferson Torresdale Hospital, located just a mile away on Knights Road, houses the parish’s original worship site: the home of Louise Drexel Morrell, sister of Mother (and later St.) Katharine Drexel, foundress of the Sisters of the Blessed Sacrament.

When Cardinal Dennis Dougherty established the parish in 1922, Morrell opened her estate to the new faith community: Masses were celebrated in the chapel of her home, and children from the still-rural area received Catholic schooling there. The parish eventually moved its Masses to the rectory and, as the area population increased, broke ground on its present church in 1954.

Although he couldn’t have known Morrell’s sister would one day be canonized, founding pastor Father James Coakley honored both Morrell and her sister Katharine by spelling the parish’s name with a “K” rather than a “C.”

As a result, the legacies of the two saints – Catherine of Siena, a 14th-century Italian mystic and doctor of the church, and her namesake Katharine Drexel, whose congregation primarily served Black and Indigenous communities – are uniquely interwoven in the parish, whose ultimate mission is “to make the church present in this little part of the world,” said Archbishop Pérez.

As it marks its first century, St. Katherine of Siena has redoubled its efforts to do just that.

Among its many centennial year activities, the parish has opted to skip a traditional banquet hall bash in favor of feeding those in need – an undertaking Msgr. Kennedy said was inspired by Jesus’ words in Luke 14:13-14: “When you hold a banquet, invite the poor, the crippled, the lame, the blind; blessed indeed will you be because of their inability to repay you. For you will be repaid at the resurrection of the righteous.”

“We can’t pat ourselves on the back while people are going hungry,” he said.

At a Lenten day of service, parishioners prepared 900 meals for the Philadelphia-based Caring for Friends, assembled more than 70 rosaries (made with help from the Catholic Daughters of America) for shipment to Ukraine and donated over 30 blankets to Project Linus for children in need.

Such outreach is all part of the central mission of a parish, which should be “a house of consolation” that reflects “the very mercy of Christ,” said Archbishop Pérez.

Quoting Pope Francis’ apostolic exhortation Evangelii Gaudium (“The Joy of the Gospel”), the archbishop noted a parish is “a community of communities, a sanctuary where the thirsty come to drink in the midst of their journey, and a center of constant missionary outreach” (Evangelii Gaudium, 28).

That work is ongoing, said the archbishop, who challenged St. Katherine parishioners to “give as a gift” what they themselves had received – specifically, by identifying people for whom they could “pray, walk with and accompany.”

The parish is up to the task, according to the St. Katherine of Siena centennial motto, which was displayed on a billboard overlooking Interstate 95: “100 years blessed – our story is still unfolding.” 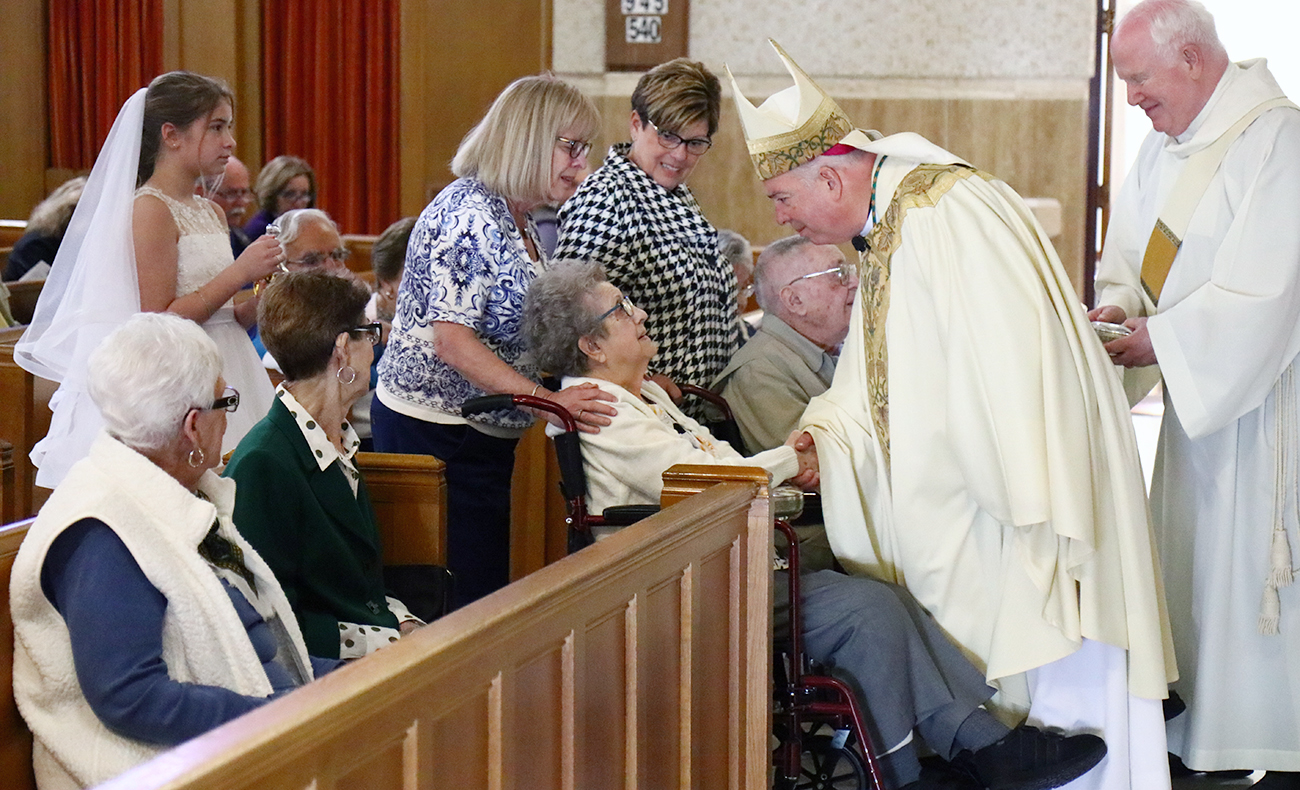 NEXT: STREAM Expo showcases ‘everything we learn,’ including faith