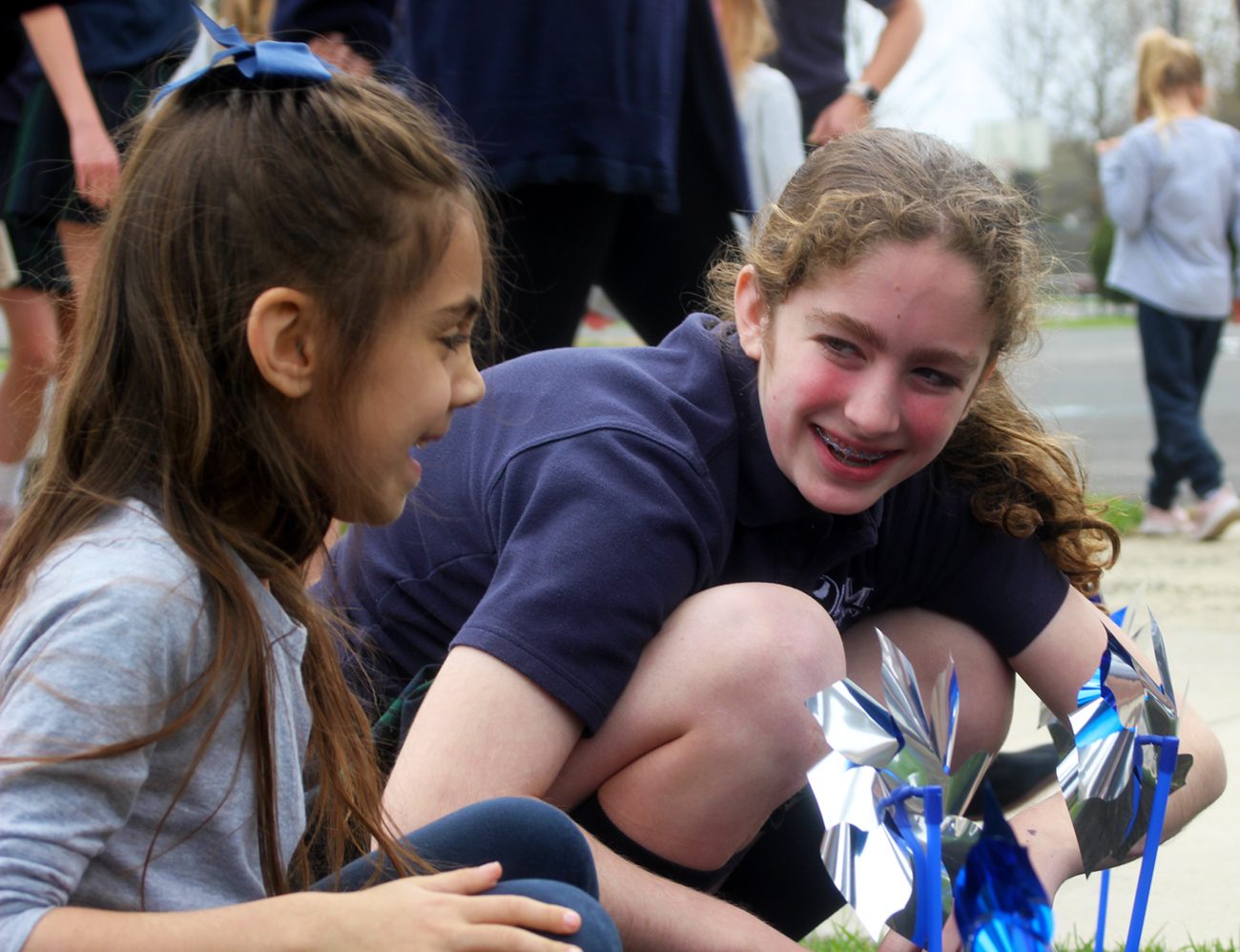 Students at Our Lady of Mercy Regional Catholic School in Maple Glen planted a garden of blue pinwheels to mark National Child Abuse Prevention Month during an April 26 event sponsored by the archdiocesan Office for Child and Youth Protection. (Gina Christian)

Hundreds of Catholic school students in Montgomery County have created an outdoor display to promote childhood safety and well-being.

More than 450 pupils from Our Lady of Mercy Regional Catholic School in Maple Glen assembled April 26 to plant a “Blue Pinwheel Awareness Garden” in front of St. Alphonsus Parish church, adjacent to the school.

The garden is part of the “Pinwheels for Prevention” initiative, a grassroots effort launched in 2008 by Chicago-based nonprofit Prevent Child Abuse America. Since then, pinwheel gardens have typically been planted throughout the country each April, which marks National Child Abuse Prevention Month.

The blue pinwheels symbolize both tragedy and triumph, said Leslie Davila, a longtime victim advocate and director of the archdiocesan Office for Child and Youth Protection (OCYP), which sponsored the event along with observances of Blue Sunday (April 24) and Blue Monday (April 25).

“The color blue comes, unfortunately, from the imagery of bruising,” said Davila. “However, the pinwheels are quite literally a spin on that, (symbolizing) the happy, healthy childhood that all kids deserve.”

The pinwheel itself is “thousands of years old, and found in all cultures,” Davila said, adding that in the current context it represents “a positive circle of love and support” that she and her team work to create.

Davila was joined at the event by members of her staff, along with Msgr. Brian Hennessy, pastor of St. Alphonsus Parish; Msgr. Stephen McHenry, pastor of St. Anthony Parish in Ambler; Father Joseph Rymdeika, pastor of St. Catherine of Siena Parish in Horsham; Dr. Andrew McLaughlin, secretary for archdiocesan elementary education; and Our Lady of Mercy principal Marianne Finnegan. 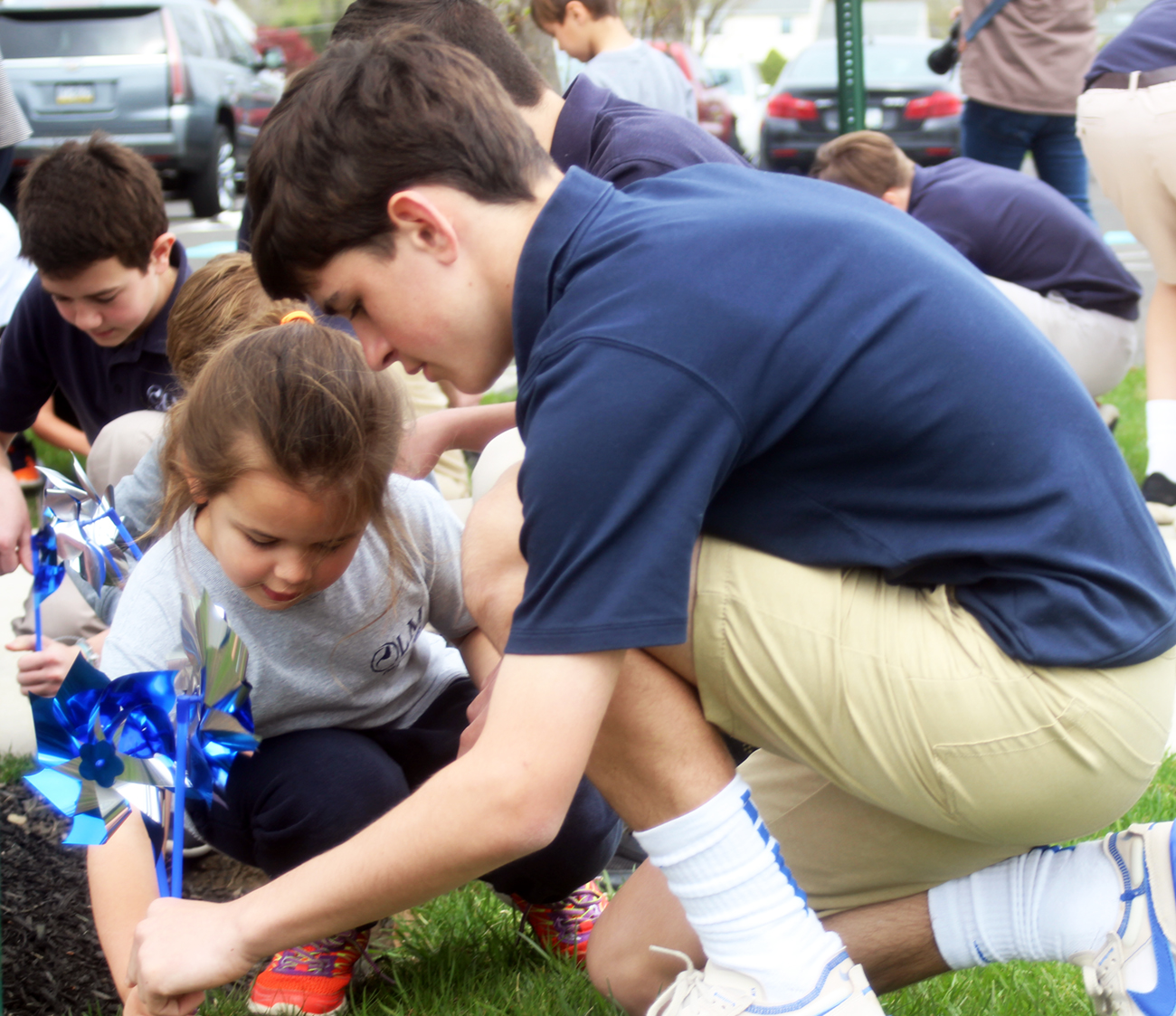 Students in the upper grades at Our Lady of Mercy Regional Catholic School in Maple Glen assisted their younger peers in creating the blue pinwheel garden, April 26. (Gina Christian)

In his opening prayer, Msgr. Hennessy gave “thanks for young lives full of hope and promise,” while asking that “our church be a place of safety for all who are in our care” and “a place of healing and hope for those who have experienced abuse or neglect.”

That prayer has increasingly been answered, said Davila, as the Catholic Church has made progress over the past two decades in not only reporting but preventing child endangerment.

In 2002, as a number of clerical abuse scandals emerged, the U.S. Catholic bishops implemented the Charter for the Protection of Children and Young People.

The document – more commonly known as the Dallas Charter owing to its adoption during the June 2002 U.S. bishops’ meeting in that city – lays out a comprehensive set of procedures for addressing allegations of sexual abuse of minors by Catholic clergy.

In addition, the charter includes guidelines for reconciliation, healing, accountability and prevention of abuse.

A year after its most recent revision in 2018, Pope Francis issued the motu proprio Vox Estis Lux Mundi (“You Are the Light of the World”) to specify norms on sexual abuse allegations regarding bishops.

Davila said such documents have had demonstrated impact over the past two decades – and both kids and families can take heart.

“When you see these pinwheels, remember we are here to support you and keep you safe,” she assured the students present. “Don’t ever be afraid to ask for help.”