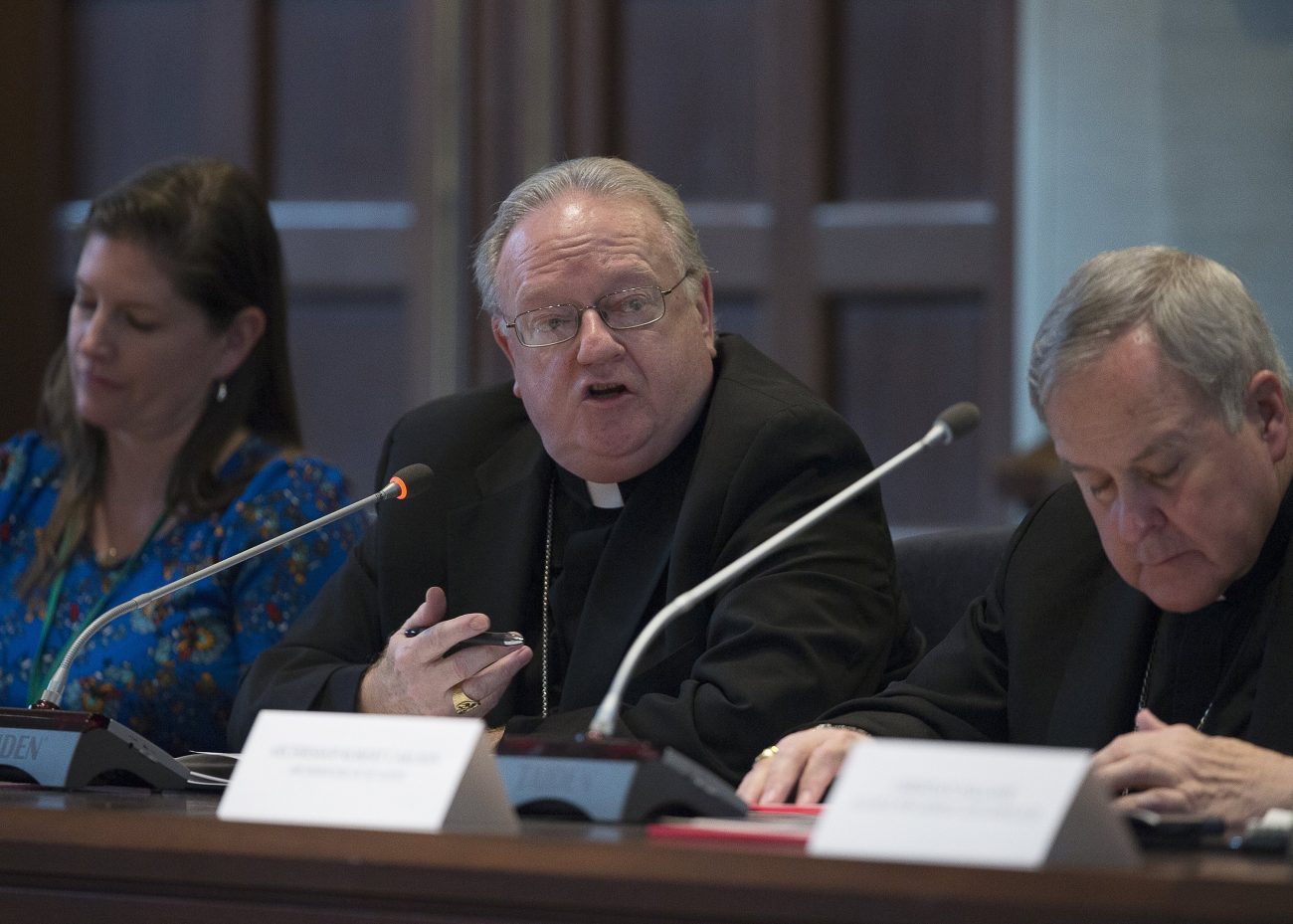 Bishop Dennis J. Sullivan of Camden, N.J., is seen at the headquarters of U.S. Conference of Catholic Bishops in Washington Jan. 17, 2018. Bishop Sullivan announced April 19, 2022, the Diocese of Camden had reached an $87.5 million settlement with more than 300 survivors of clergy sex abuse.(CNS photo/Tyler Orsburn)

CAMDEN, N.J. (CNS) — The Diocese of Camden and the committee representing about 300 survivors of clergy sexual abuse have reached a settlement of $87.5 million, one of the largest such settlements in the country.

An April 19 news release said the settlement will provide for the establishment of “substantial trust to compensate survivors of sexual abuse within the diocese.”

“The trust will be funded from the diocese and related Catholic entities over a four-year period,” it said. “The settlement also includes maintaining or enhancing the protocols for the protection of children, which were first implemented by the diocese in 2002.”

The settlement have to be approved by the U.S. Bankruptcy Court for the District of New Jersey. In October 2020, the Camden Diocese filed for bankruptcy under Chapter 11 of federal bankruptcy law. In December of that year, the diocese submitted its plan of reorganization.

The diocese and the Survivors’ Committee, known formally as the Official Committee of Tort Claimant Creditors, planned to present the settlement to U.S. Bankruptcy Judge Jerrold N. Poslusny Jr. for approval by early June 2022.

Camden Bishop Dennis J. Sullivan in a statement said the diocese was pleased the mediation process led to the settlement.

“I want to express my sincere apology to all those who have been affected by sexual abuse in our diocese,” he said. “My prayers go out to all survivors of abuse, and I pledge my continuing commitment to ensure that this terrible chapter in the history of the Diocese of Camden, New Jersey, never happens again.”

The agreement comes about three years after New Jersey became one of a number of states that extended its civil statute of limitations, so that people who said they had been sexually abused years before as children could sue.

Attorneys for the survivors said the average payment for each person who filed a claim would be about $290,000.

“The Survivors’ Committee is pleased to have reached a consensual resolution of its disputes with the diocese and looks forward to facilitating an expeditious distribution to survivors of sexual abuse,” said Jeffrey Prol, legal counsel for the committee.

In a letter to the Catholic faithful of the diocese, Bishop Sullivan said the settlement “provides for the funding of a trust created by the diocese and parishes with payment of the settlement amount over four years beginning on the effective date of the plan of reorganization.”

That date that will be determined by Judge Poslusny “upon the plan’s acceptance and confirmation.”

“I am heartened that the mediation process has reached a settlement whereby the survivors will be compensated, while allowing the diocese to continue to serve its parishioners and all residents in southern New Jersey,” the bishop said.

He also was hopeful the settlement “will be remembered as a positive step in our attempts to rectify past sins.”

Once the settlement is approved and the diocese’s reorganization plan is confirmed by the Bankruptcy Court, the news release said, the first payment from the diocese will be $50 million.

The diocese will pay an additional $10 million on the first, second and third anniversaries of the effective date of the settlement and make a final payment of $7.5 million on the fourth anniversary of the date.

He thanked each of the survivors and the members of Survivors’ Committee “for their commitment to this process.”

“The Chapter 11 journey is another of many roads the diocese and parishes have taken during the past 30-plus years as the Diocese of Camden has confronted clergy sex abuse and its impact on survivors,” Bishop Sullivan said.

He said diocesan officials expect the settlement “to be the final financial step to settle survivor claims” but we know it is only the next step along a perpetual road of ensuring that this kind of abuse — and our response to it before the 2002 memorandum of understanding pursuant to which we report abuse to law enforcement — never occurs again by anyone in our ministries, parishes, and schools.”

The Camden Diocese “is committed to maintaining or enhancing all of the programs currently in place to ensure the safety of children and others in our community from abuse,” Bishop Sullivan said in his letter. The diocese also will “maintain its current program of providing therapy to all survivors of abuse.”

“Let us all continue to pray for the survivors, while again recommitting ourselves to the protection of all youth and vulnerable people in our care, today and always,” Bishop Sullivan said.

NEXT: Judge might block plan to end pandemic border restriction