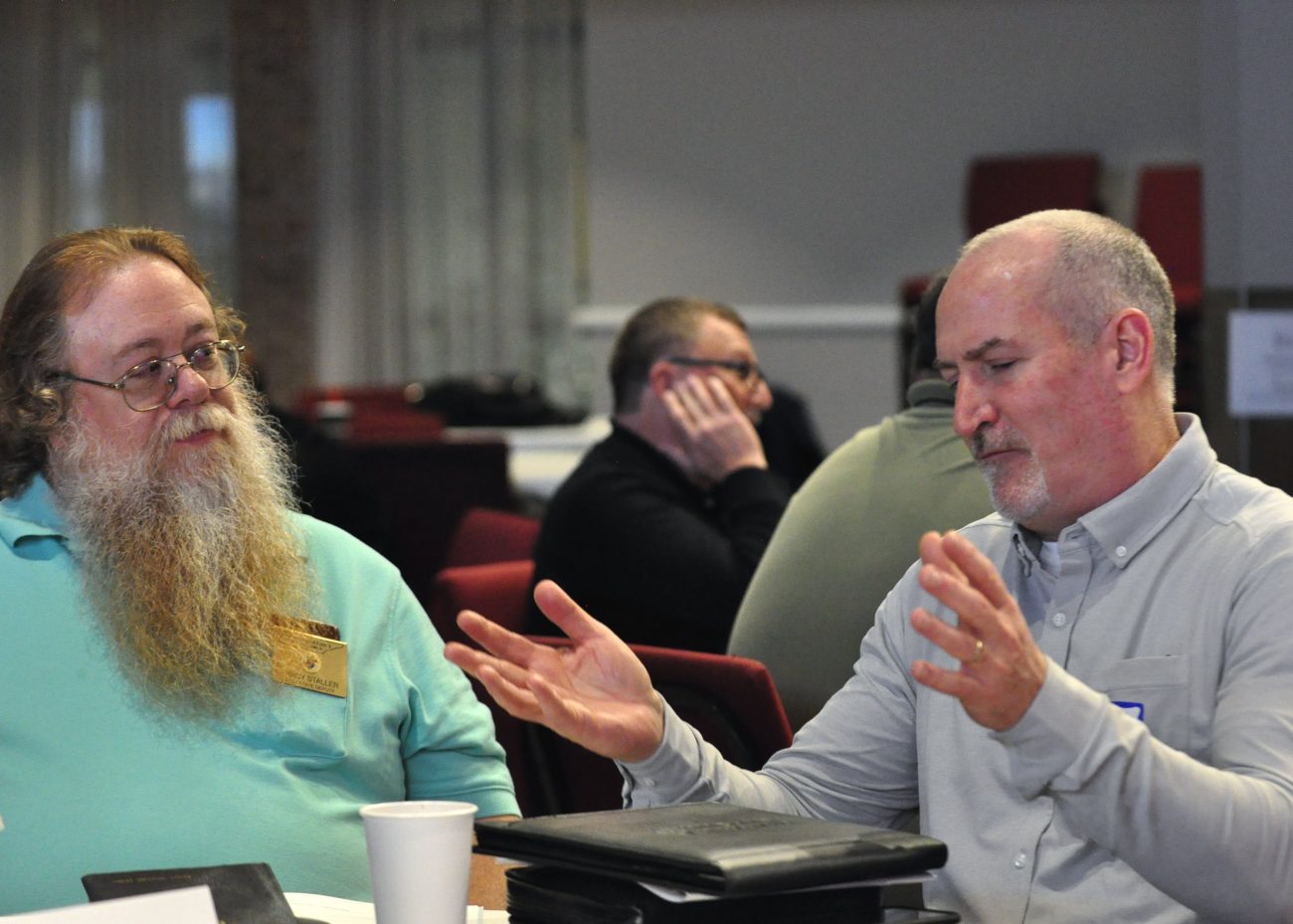 NASHVILLE, Tenn. (CNS) — Leaders of the Knights of Columbus see the Catholic men’s fraternal organization as a powerful engine for evangelization, and to start that engine they are developing a program to train members on how to evangelize.

“We think it’s desperately needed in the church,” said Damien O’Connor, vice president of evangelization and faith formation for the Knights’ Supreme Council, which has its headquarters in New Haven, Connecticut.

“We’re all called to evangelize,” but few Catholics are comfortable with that mission, O’Connor told the Tennessee Register, newspaper of the Diocese of Nashville. “We take it for granted that everybody knows how to share the faith.”

So the Knights are developing a prototype of a training program — the Sons of McGivney Evangelization and Discipleship Training — that was unveiled during a weekend training retreat March 17-20 at the Catholic Pastoral Center in Nashville.

“McGivney” in the title refers to Blessed Michael McGivney, who founded the Knights of Columbus in 1882.

About 30 Knights from across Tennessee and 10 members of the staff at the Supreme Council participated in the training retreat, led by Sean Pott, director of evangelization and education for the Knights.

Before working for the Knights, Pott was a missionary with the Fellowship of Catholic University Students, or FOCUS, for 10 years, including six years working on college campuses and four years on the formation team.

The Knights’ training program draws on features in the model used by FOCUS to evangelize among college students.

During the retreat, the training program was broken down into three steps: “Win,” “Build” and “Send.”

The “Win” phase is focused on building relationships and includes “leading and introducing to Jesus Christ … through friendship and the proclamation of the Gospel,” according to the training materials.

“One of the best ways to tell people why they should meet Jesus is telling our own stories,” Jonathan Reyes, the Knights’ senior vice president of communications and strategic partnerships, said in a presentation during the training.

In the “Build” phase, Knights will help others build and grow in the faith so they can share it. The local unit of the Knights is the councils. That structure provides a place where “the building can happen in an organic way because of the fraternal relationships already there,” Pott said.

And in the “Send” phase, Knights will share the Gospel with others as missionary disciples. “We’ve been given a gift, and in gratitude we share it with the world,” Pott said.

“If we enable a handful of Knights and train them to evangelize their peers it will expand authentically and deeply,” Pott said.

“Every human heart longs to know Jesus Christ. It’s how we’re made,” Reyes told the training participants. “There’s nothing that is going to satisfy the human heart other than a relationship with the Lord.

“We don’t claim to convert people,” Reyes said. “That is the work of the Holy Spirit.”

“Evangelization is inviting people to meet Jesus Christ and make a decision … to follow him,” Reyes said. “That’s all it is. … It’s an invitation.”

Fear is one of the biggest obstacles keeping people from evangelizing, Reyes said. “Fear of not being liked. Fear of rejection,” he said. “Our Lord was treated much worse.”

Knights who receive the training are being asked to start by organizing a small group Bible study among members of their council, Pott said, “to nurture the relationship with God, grow in relationship with each other, and to spiritually multiply.”

“Every one of us who has met Jesus Christ is called in some way to be an evangelist,” Reyes added. “We are hoping that as other people come to know Jesus, they too will become evangelists, and this is how the Gospel spreads.”

But the efforts shouldn’t be limited to the Knights’ councils, Pott said. “We want the Knights to engage with their pastors and their parish.”

“We want them to proclaim this in their council, and eventually it will grow into their parish, and then out into the community,” said Tennessee State Deputy Fred Laufenberg, a parishioner at St. Francis of Assisi Church in Fairfield Glade.

The Supreme Council staff is still developing the program and hopes to use the weekend in Nashville to fine-tune it before using it in other locations, O’Connor said.

The Knights have been working to focus more of their efforts on faith formation for several years, beginning under past Supreme Knight Carl Anderson and continuing under current Supreme Knight Patrick Kelly.

“This is not new. It sounds new, but it’s not,” said O’Connor, who pointed to the Knights’ Charter Constitution and Laws, which state: “The purposes for which said corporation is formed, always consistent with Catholic values and doctrine, are the following: … through common worship, charitable works, meetings, and rites of initiation, to form its members in Catholic faith and virtue; … to unite members in their Catholic identity and the practice of their Catholic faith.”

The focus on faith formation has been overwhelmingly well received, O’Connor said, “which means our brothers out there have been waiting for this kind of message and are happy to engage in this.”

The Knights chose Tennessee for the first training retreat because the Tennessee Knights are already five years into an initiative to make the organization more Christocentric and to focus on faith formation for its members.

“We’ve been setting the foundation that this is what we’re going to be about,” Laufenberg said.

“Growing up, the faith was part of your life,” said Laufenberg, remembering regularly praying the rosary and the Stations of the Cross with his family and fellow parishioners.

But participation in those kinds of practices has been fading in recent decades and more and more Catholics are leaving the church, he said.

The goal is “getting Catholic families back into the church, celebrating the faith, receiving the sacraments, to stop this outflow of people and families who no longer see God as an important part of their family life,” said Laufenberg.

The long-term vision for the program, O’Connor said, is if any Catholic man wants to know how to be stronger in the faith, “people will automatically say, ‘That’s easy. That’s the Knights of Columbus.'”

NEXT: Vatican officials in U.S study alleged miracles in Father Tolton’s cause