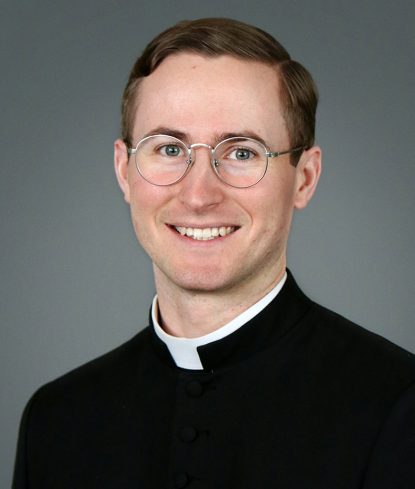 Transitional Deacon Andrew Lane will be ordained a priest for the Archdiocese of Philadelphia May 21.

This is the third in a series of six profiles of the men to be ordained new priests for the Archdiocese of Philadelphia on May 21 — see the others in our Profile section.

“I knew deep inside I was called to be a priest,” said Deacon Andrew Lane, a transitional deacon of the Archdiocese of Philadelphia preparing to be ordained to the priesthood May 21 at the Cathedral Basilica of SS. Peter and Paul. “I knew that when I was in fourth grade.”

An early role model for Lane was a parish priest he knew as a young Catholic school student when his family was living in Rochester, N.Y.

“The school had daily Mass available, and I got to serve his Mass every day that year,” said Lane. “He was a holy, holy man. He had been ministering as a priest in charge of two parishes. He was disabled and had to use a power chair to get around. He made a profound impact on me.  That was about the time I started thinking about becoming a priest.”

Lane was born in Newark, Delaware, one of four children of Michael and Maria Lane. The family lived in Chester County at three separate times during Andrew’s youth, but he considers Sacred Heart Parish in Oxford to be his home parish. The family also lived in North Carolina, Georgia and New York.

“We were raised all over the East Coast,” said Lane, “but we were always raised strong in the faith. We were blessed to go to Catholic schools throughout our whole upbringing.”

Lane’s mother worked as a pharmaceutical sales executive, and frequent moves became a necessity as the companies for which she worked experienced corporate acquisitions.

His father worked as an educator and spent much time taking care of Lane, his older sister Angela and his two younger brothers, John and Peter.

“We lived a pretty normal life,” Lane said of he and his siblings. “We played sports, did a lot of fishing and hunting with our dad.”  Even though moving was a big part of his early life, “we were able to grow roots in different places.”

Despite feeling an early call to the priesthood, Lane started experiencing a change of heart as a high school student at Aquinas Academy in Bear, Delaware.

“I was living a pretty worldly life in high school, just trying to be popular and fit in,” he said.  When his high school showed students educational videos about religious vocations, Lane said he “had butterfly feelings in (my) stomach and turned away when seeing certain things, such as a priest giving absolution to a dying man.”  He convinced himself “that being a priest wasn’t going to make me happy.”

It was a missionary trip to Haiti in the summer of 2010 that changed his mind. A catastrophic earthquake had struck the Caribbean island nation in January of that year.

“The mission trip was a big conversion experience for me,” said Lane, who traveled to Haiti as a missionary while still a high school student. “I went on this mission trip without knowing anyone else on it. It was providential.”

Lane’s sister Angela was growing deeper in her own faith at the time and knew of the missionary trip through a friend who was a priest. “She thought it would be good for me, Lane said. “She saw that I needed some help, so she set it up.

“When I went to Haiti, I was really struck by how much suffering there was amongst the people, and how poor the people were,” he said. “Yet they were tremendously joyful and happy, happier than I was living my worldly life. That gave me pause.”

Lane says he was also influenced by a priest who was on the same missionary trip, who Lane describes as “very fervent, very reverent.” He was moved by the priest’s strong belief in the real presence of Christ in the Eucharist, his celebration of Mass and how giving he was to the people of Haiti.

Lane found himself changed when he returned home.

“I came back, and I knew deep inside I had to open up to God,” he said. “As soon as I opened up to him, the thought of the priesthood was immediately there” and Lane realized the beauty of a vocation to the priesthood.

“I asked myself what’s more important than what the priest does? He brings God to souls, and he brings souls back to God through the sacraments,” Lane said.

Lane started his seminary studies in 2011 as a high school senior when his family was living in New Hampshire. He later transferred to St. Charles Borromeo Seminary in Wynnewood.

St. Maximilian Kolbe is an inspiration in Lane’s vocation. One phrase of the saint who died in 1941 at Auschwitz concentration camp after volunteering to die in place of another prisoner has come to mean a lot to him: “For love, even to the point of becoming a victim.”

“I always found that so profound, his mature and manly desire to offer himself in sacrifice and be a victim united with Christ,” Lane said. “I find that model of living the priesthood is the most beautiful I can imagine.”

Lane’s family also has a devotion to St. Padre Pio, saying his parents had experiences of prayers answered through St. Pio’s intercession.

“I put my vocation in his hands and asked him to take me on as a spiritual child,” Lane said. “I think he’s been looking out for me.”

After his ordination, where family members from across the United States will attend, Lane will return home to Sacred Heart Church in Oxford to celebrate his first Mass.

At this point he’s “really looking forward to celebrating Mass, and to hearing confessions. I’m humbled by the thought of being a confessor, to be drawn into that intimate encounter between an individual soul and the God who loves them so much.”

Lane also looks forward to continuing his work with Blessed Sarnelli Community in the Kensington section of Philadelphia, which is an organization dedicated to providing for the needs of local people who are poor and abandoned.

He also has a future desire “to serve men and women in the military for a time” as a priest chaplain with the Archdiocese for the Military Services based in Washington, D.C.

PREVIOUS: Journey from politics to priesthood helps lead others to heaven

NEXT: Catholic school grad goes ‘back to basics’ at Little Flower HS