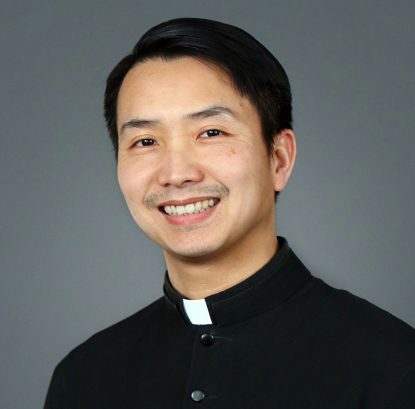 Transitional Deacon Ryan Nguyen will be ordained a priest for the Archdiocese of Philadelphia May 21. (Photo by Sarah Webb)

It was Dec. 21, 2012, and Ryan Nguyen was driving around South Philadelphia on his day off from his busy job as a Rite Aid pharmacy manager. The possible end of the world was on his mind at the time.

“I had been watching the news in the previous week about this apocalyptic event, like a doomsday event, that was supposedly going to happen according to the Mayan calendar, which runs out on that date, December 21, 2012,” he said. The television news stories he saw depicted people building underground bunkers to shelter themselves from disaster.

He found himself at the intersection of Broad and Federal Streets where he noticed a beautiful church. It looked to him like a Catholic church and since he was raised Catholic and still attended an occasional Sunday Mass, he parked his car by the curb and walked inside.

“I figured if the world is going to end, I might as well come inside and check this church out,” he said.

He found himself inside the newly renovated National Shrine of St. Rita of Cascia on South Broad Street in Philadelphia, admiring the beauty of the shrine’s grotto, bronze statues and sacred paintings.

After about 30 minutes, he entered a confessional with 87-year-old Augustinian Father Eugene Del Conte, who Nguyen described as “gentle.”

In his first confession in 15 years, Nguyen confessed his sins and how he was “living a secular lifestyle, indulging in pleasures and chasing after materialistic” goals.

The priest told him, “Your soul is being poisoned,” Nguyen remembers. The more he thought about those words, the more they “started to sink in for me,” he said.

It was this experience that led to his conversion back to his Catholic faith.

Today Transitional Deacon Ryan Nguyen is preparing to be ordained a priest for the Archdiocese of Philadelphia, along with his five classmates, May 21 at the Cathedral Basilica of SS. Peter and Paul.

He was born in Ho Chi Minh City, also known as Saigon, in Vietnam in 1981. One of six siblings, daily Mass was part of his family’s life in Vietnam. “We were very devout, but the thought of becoming a priest never crossed my mind,” Deacon Nguyen said.

He and his family came to the United States in 1993 when he was 12 years old. He enjoyed the strong Vietnamese youth ministry at St. Thomas Aquinas Parish in South Philadelphia, but during his teenage years, he “was kind of slacking” in his faith, feeling lukewarm and indifferent about it.

When he became a student at Temple University, “the thought of God didn’t cross my mind” and other than praying an occasional Hail Mary, “church going was almost non-existent” for him, Deacon Nguyen said.

After switching majors a few times at Temple, he decided to follow in the footsteps of his two older sisters who were pharmacists. He transferred to Philadelphia College of Pharmacy, now University of the Sciences in Philadelphia, in the fall of 2002.

Nguyen received his pharmacy degree in May 2007 and began working at the Rite Aid pharmacy in center city Philadelphia. He became a pharmacy manager six months later.

On the outside Nguyen was responsible and successful, but on a spiritual level something was missing, until that day in 2012 when he found himself inside a confessional at St. Rita’s Shrine.

“After that I went to Mass like every week, and I began confession every other week, then weekly,” he said, adding he also spent much time in eucharistic adoration.

It was after he started attending daily Mass about a year later that he says he “started to feel like Jacob, wrestling with the Lord” about the priesthood.

“I was complacent,” he said. “I was working at a Rite Aid store in South Philly. I don’t have to become a priest,” he thought. “I can pray the rosary, the Divine Mercy chaplet, and still go to heaven.”

But the call to evangelize others and serve as a priest would not go away.

“The stir of preaching compelled me to pay attention to the nudging of my heart,” he said. “God gave me the interior knowing that I had to make a choice. I cannot be complacent anymore. Do I want to help Mother Church who is so wounded and understaffed, or do I want to serve this corporate company and its profits? So, I had to make that choice.”

“That was a great boost of morale,” Nguyen said. “All of my friends and family thought I was nuts for entering (St. Charles), but when they saw me and the pope taking pictures together, they said, ‘Okay.’”

Deacon Nguyen faced a few personal challenges in his first year in the seminary, but “God’s grace pulled me through for sure,” he said.

At first it was hard for him “to be one of the guys,” since Deacon Nguyen’ classmates were almost 10 years younger than him.

Especially during his class’ Spirituality Year in the seminary, he was challenged to transition from being a manager “where I was managing 10-plus people, telling them what to do (and) being in control and being blunt,” to then “detach from that, and meet my brother eye-to-eye. That was hard.”

But he managed that difficulty and the arduous theological studies in his priestly formation.

Deacon Nguyen says that after his ordination as a priest next month, he looks forward to administering the sacraments including “absolving people, anointing, baptizing, laying on of hands — things you can’t do as a deacon. As a priest you can do so much with your hands.”

After the Blessed Mother, Nguyen’s favorite saint is St. Therese of Lisieux. “I love her idea of oblation, self-giving, self-donation to the Lord, and her sense of nothingness,” he said. “God is everything. I love how she wanted to become a small child, to reduce herself to a sense of nothingness, because out of this nothingness, you can open yourself up and receive everything from the Lord.”

He also feels close to St. Philomena and St. Maria Goretti for helping him to “commit to a life of chastity,” and especially to St. Rita, the patron saint of impossible causes at whose shrine he experienced his 2012 conversion and the start of his road to priesthood.

Indeed, nothing is impossible with God.

NEXT: Would-be Presbyterian minister instead heard call to be Catholic priest