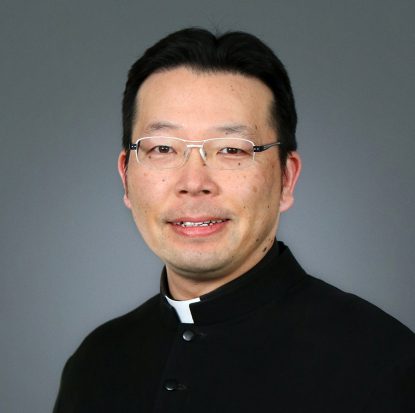 Transitional Deacon Sang Woo Chi will be ordained a priest for the Archdiocese of Philadelphia May 21. (Photo by Sarah Webb)

“I was born and raised in a Presbyterian Christian family,” said Sang Woo Chi, a transitional deacon at St. Charles Borromeo Seminary in Wynnewood.

“Somehow, God sowed the seed of my vocation at a very early age. My family expected me to become a Presbyterian minister, following in the footsteps of my father. But now I understand that was a calling to the priesthood.”

Chi and his five classmates at St. Charles will be ordained into the priesthood on May 21 at the Cathedral Basilica of SS. Peter and Paul.

Chi was born in South Korea where his family — comprised of his parents, himself and a younger brother — lived in the church building where his father served a small Presbyterian congregation.

“Church was where my everyday life took place,” he said.

Chi assisted his father with church duties during his youth until leaving to serve his mandatory service in the South Korean armed forces at age 21.

After completing his military service, Chi spent two years studying in a Presbyterian seminary in South Korea before coming to the United States.

“My father sent me to the United States to experience the people, spirituality and the advance of theology in the West,” he said. “So, I came here, and while I was studying, God called me to the Catholic Church.”

In the U.S., Chi earned a bachelor’s degree in philosophy then in 2005 decided to pursue graduate work at the Divinity School at Yale University. Established in 1822, the school offers a curriculum that covers all Christian faiths, including Catholic, Lutheran, United Methodist and Reformed.

Chi discovered his love for the Catholic Church by reading the church fathers, including St. Augustine and St. Thomas Aquinas.

“Then my heart kept moving toward the Catholic Church,” he said. “In the Catholic faith, I found the answers to all of the questions I had in life.”

After graduating from Yale with a Master of Divinity degree, Chi moved to Boston to study for a doctoral degree in theology at Boston University.

He began attending Mass at a parish in his Boston neighborhood. When entering a Catholic church for the first time, Chi noticed the altar and the crucifix, and he felt moved to kneel and pray.

He says that he talked to his father by phone every day, and during this time, Chi shared with his father what he was learning about the Catholic faith.

“He was always so happy to hear what I learned about the Catholic Church,” Chi said of his father, who passed away just before Chi entered St. Charles Seminary.

Chi came to Philadelphia in 2009 while finishing up his doctoral dissertation. He stayed in an extra room at the house of a friend, his former classmate.

When the friend couldn’t find a teaching job, he opened an ice cream store in Broomall, Delaware County.

That’s where Chi lived, in a back storage room at the store. He also helped serve customers, making milk shakes and smoothies for children and their parents.

Chi also started attending Mass at St. Pius X Church in Broomall. When he was later assigned to St. Pius X as a seminarian, Chi says he was recognized by parents and children there as “the Smoothie Guy” from the ice cream store.

Eventually, Chi was compelled to answer the call he first felt during his childhood, and he entered the seminary at St. Charles in 2017.

He draws inspiration from his favorite saint, St. Andrew Kim Taegon, the first Korean-born Catholic priest and the patron saint of Korean clergy. Another favorite saint is St. Mary Magdalene, because “she loved Jesus so much, her love always inspired me,” he said.

During his seminary studies Chi has had assignments at local parishes, such as St. Gabriel in Norwood, which Chi considers his “home parish” for the last five years, also St. Andrew in Newtown, St. Pius X and St. Eleanor in Collegeville.

Chi also had an assignment at Catholic Social Services in Chester. Working in the facility’s soup kitchen, Chi provided counsel and prayer to people coming in for meals, many of whom had been released from a nearby prison.

After his upcoming ordination, Chi said he is “expecting many new experiences.”

Chi still sets aside one hour a day to study the English language.

He says he looks forward to sharing with others all that he’s learned in studying philosophy and theology for 17 years.

Chi also looks forward to being part of a parish family. “I don’t have any family here, so the parishioners are like my family,” he said.

Chi’s mother and younger brother still live in South Korea. His brother is married now with twin daughters. His mother became a Catholic at age 74.  She is now 77.

“I encouraged her to come to the Catholic Church,” Chi said.

PREVIOUS: Visit to ‘saint of the impossible’ laid his path to priesthood

NEXT: As 1st Haitian priest in Phila., seminarian to carry on a legacy