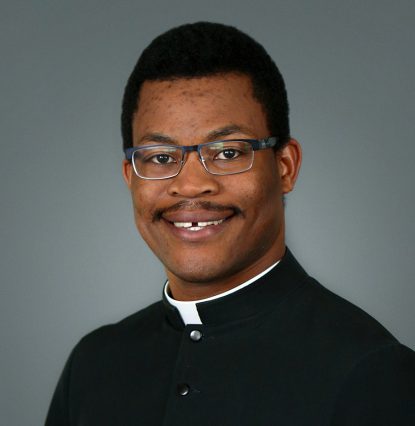 This is the last in a series of six profiles of the men to be ordained new priests for the Archdiocese of Philadelphia on May 21. See our Profile section for each in the series.

When 12-year-old Roneld St. Louis was growing up in South Haiti, a priest who was his teacher at the Good Shephard School told him, “I would like to see you as a young seminarian because I want you to carry my legacy.”

The young man thought about this idea, and now in two weeks he will become the first Haitian-born man to be ordained a priest in the Archdiocese of Philadelphia on May 21.

St. Louis is the fifth of seven children in a large Catholic family from Jérémie, Haiti. Of the priests who taught him in Catholic school, St. Louis says, “I was inspired by them. I thought I would like to be one of them someday.”

As a typical teenager, St. Louis “was crazy about dancing,” so at age 14 he received permission from his family to participate in a dance program on Saturdays where he mastered kompa, a Haitian dance in the style of meringue, as well as rumba, salsa and cha-cha. By 17, he danced well enough to be one of the instructors in the program.

As a high school student at St. Peter College (high schools in Haiti are called colleges), St. Louis discovered a love of singing in the choir. He sang in the bass section, though he considers himself a baritone. During this time he “felt something calling to” him as he spent more time with the priests who were his teachers there.

At age 19, shortly after graduating from St. Peter’s, St. Louis became a seminarian with the Congregation of the Missionaries of St. Charles Borromeo (Scalabrinians), an international community of religious serving migrants and refugees of different cultures, religions and ethnicities in 32 countries and on five continents. The congregation was founded in 1887 by Blessed John Baptist Scalabrini, then bishop of Piacenza, Italy.

St. Louis joined the order in Port-au-Prince, the capital of Haiti. This was his first time venturing to his country’s capital since his hometown was eight hours away.

While in the seminary St. Louis continued his academic studies and graduated with a Bachelor of Philosophy degree from the Philosophical Institute of St. Francis de Sales in Haiti.

In 2015 St. Louis was sent to the congregation’s ministry in Guadalajara, one of Mexico’s largest cities, even though he knew no Spanish.

“I spoke (Haitian) Creole as my first language,” he said. “Then I spoke French in school; everything was in French. I learned Spanish when I went to Mexico.”

He would later learn English after arriving in Philadelphia, and he also studied Latin, Greek and some Italian as part of his seminary studies.

After three months in the seminary in Mexico, St. Louis was sent to work at Caritas Mexico, a Catholic charitable organization serving the poor. He lived and worked in a shelter, serving immigrants from Central America by providing food, shelter and safety.

St. Louis said that some immigrants later reached out to him through social media after arriving in the U.S. He said he’s received messages from immigrants through Facebook saying, “Hello, I’m still alive.”

“We prayed for them that they get to their destinations,” he said. “So when they say they made it, it’s good news and we’re happy to get it.”

He estimates some “20 to 40 percent” die along the journey, he said. “Some of them ride on the tops of trains, and sometimes they fall. We get the call that they’re in critical condition, and they have to go to the hospital. It was sad.”

St. Louis said the shelter was “a kind of embassy” where the immigrants could find safety from the police.

He recalls one night at the shelter when none of the staff showed up for work and the assigned priest was away at his nephew’s wedding in the U.S.

St. Louis found himself to be the only staff member in the shelter with 500 immigrants.

“A police officer came looking for someone in the house. I said, ‘No, I will never let you in because this is our policy. The people here are safe,’” St. Louis said.

After his mother’s recovery, St. Louis traveled to visit his oldest sibling, a sister who he hadn’t seen in five years. She was working in Philadelphia as a nurse assistant.

St. Louis didn’t know the English language when he first landed in the U.S., but found he was able to communicate using his knowledge of Spanish.

“I spoke Spanish to the priest because he spoke in Spanish. He was surprised I was from Haiti,” St. Louis said. “He said, ‘Is Spanish spoken in Haiti?’ I said, ‘No, I was a seminarian in Mexico, so I spoke Spanish in Mexico.’”

The priest invited St. Louis to continue his discernment while in Philadelphia.

After visiting St. Charles Borromeo Seminary in Wynnewood and meeting with then Archbishop Charles Chaput, St. Louis decided to stay in Philadelphia to continue his seminary studies in 2017.

“I realized there’s one God, one people, and different places,” he said.

St. Louis studied English for eight months before resuming his priestly formation studies at St. Charles. He said “it wasn’t hard” to learn English. “When you know a lot of languages, it’s easier for you to learn a new language.”

St. Louis has a great devotion to the Blessed Mother, Mary. “She’s the Mother of the church and our mother,” he said. “All of my assignments in Philadelphia were Marian (parish) assignments.”

But it was his first parish assignment, Blessed Virgin Mary in Darby, where St. Louis found a mentor in Msgr. Joseph Corley, then the pastor of the parish, who is now deceased.

“He was one of my closest friends in Philadelphia,” St. Louis said of Msgr. Corley. “He never introduced me as a foreigner, as somebody from the outside. He introduced me saying, ‘This is my brother, Roneld. He can sing. He can dance.’”

“Even when I was at another assignment,” St. Louis said, “he always called me to ask if everything was okay.”

In his priesthood, St. Louis said he wants to focus on “a reaffirmation of family as a domestic church because we need the figure of family as the first community, the first society, the natural society, and then as the center of our humanity. Without family, we cannot be anything.”

St. Louis says he finds inspiration in his own large family in Haiti.

“We receive our first education in the family,” he said. “We catechize in the family; teach the children, and then send them to the outside. Nowadays, it seems the state tries to take over family responsibility. There’s nobody that can love the children more than the family. When you try to separate family and children, you destroy our entire humanity.”

St. Louis looks forward to saying his first Mass as a priest May 22 at St. William Church on Rising Sun Avenue in Philadelphia, which he considers his home parish. He is proud that St. William has “a large Haitian community, (plus) Pakistani, Hispanic and Anglo” worshipers.

The young man first inspired as a boy to carry on a priestly legacy now wants “to carry the legacy of Jesus the way it should be” because “Jesus is with the priest,” St. Louis said.

“The priest leaves Jesus with the people through the sacraments and preaching the Good News, the Gospel.”