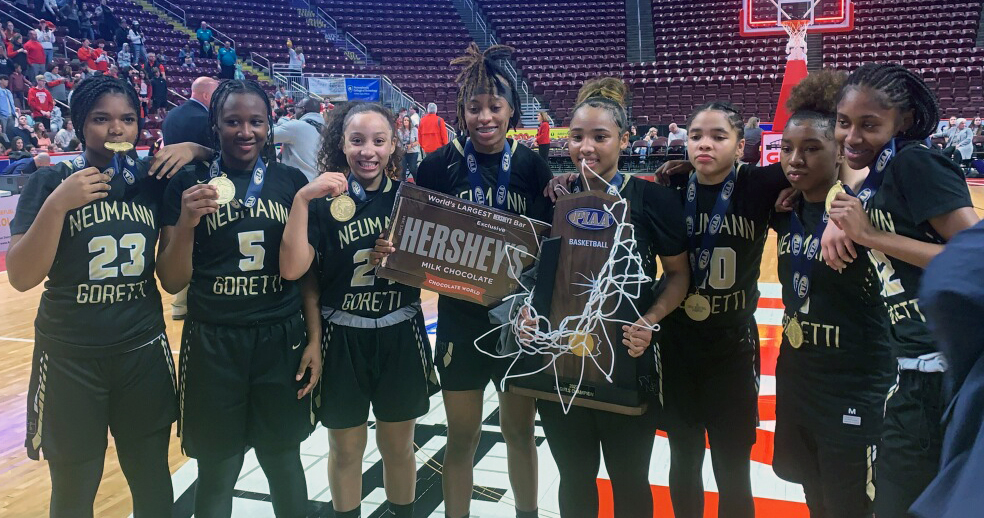 Neumann-Goretti edged Freedom Area High School, 55-49, for the PIAA Class 3A championship at the Giant Center in Hershey, Pa. It is the fifth Saints girls' basketball state title under coach Andrea Peterson.

Minutes earlier, the Neumann-Goretti senior had just played every second of the Saints’ 55-49 PIAA Class 3A slugfest victory over Freedom Area High School at the Giant Center in Hershey, Pa. – the program’s fifth title under coach Andrea Peterson.

As she stood outside the locker room following a jubilant team celebration, Hayes reflected on her team’s journey – and that of her own.

Though she chose not to dwell on losing two siblings six months apart last year, the gleam in Hayes’ eyes – as well as her pointing to the sky at the end of the game – professed her profound familial love.

“I’m proud of my teammates,” said Hayes. “Thank you to Coach Peterson. I’m just happy. They have just as much heart as I do.”

Few, if any, had as much heart as Hayes this season.

Her final performance in a Neumann-Goretti uniform was epic. Despite being hounded by Freedom Area’s defenders, Hayes completed an astounding 32-point, six-rebound, six-steal, two-assist effort by scoring 15 of the Saints’ 17 points during the pivotal fourth quarter, including a perfect six-of-six shooting from the foul line over the final 52 seconds. 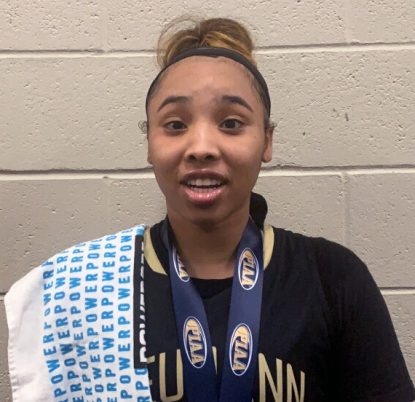 “I can’t be tired,” said Hayes. “I fight through adversity. Just get the job done. I just have to give everything I can. Playing all the games is a hard test, but I knew I had to do it.

“I got heart. I wanted this so bad. This is what I love to do. I just gotta have fun at the end of the day.”

Describing much of N-G’s game as “fun” might be stretch. Before hitting five of their last nine shots in the fourth quarter, the Saints had shot a subpar 36 percent from the floor.

In the end, winning ugly never felt so good.

“We played a nationally ranked non-league schedule for this moment right here,” said Peterson. “You could tell at the end we kind of kept it together and we didn’t fall apart, and I think that’s what makes the difference.

“With what these ladies have endured during the season, I’m talking about off the court – Mihjae losing two siblings; D’Ayzha has lost a few family members … so leading up to this, you have young ladies going through things that are bigger than basketball.”

“When you see that smile at the end of the game – especially Mihjae when she pointed up at her brother and her sister – it’s tremendous for her to finish a game like this and go out as a state champ.”