Roman Catholic won its fourth PIAA state title with a 77-65 victory over Archbishop Wood in the Class 6A final in Hershey. (Photo by John Knebels)

Asked to reflect on the Cahillites’ 77-65 victory over Philadelphia Catholic League peer Archbishop Wood in the PIAA Class 6A state championship at the Giant Center in Hershey, Pa., McNesby acknowledged the outstanding contributions from several starters.

And then there was senior Quadir Brown. His final stat line? Zero points. One rebound.

To McNesby, that didn’t mean a thing.

“Quadir was our unsung hero,” said McNesby. “Quadir was so critical to our success this year. Every successful team needs players like Quadir. He epitomized what a senior leader should be.”

When a team like Roman has three first-team All-Catholics like Skillings, Xzayvier Brown and Farmer, there are only so many opportunities a player can expect.

Brown understood his role; thus, he focused his energy on supplying the proverbial “little things” that rarely show up in a box score.

Even though his average game input of 4.7 points, two rebounds, one steal, one block, and 1.5 assists in 17 minutes did nothing for the “Wow!” factor, playing consistently strong defense and leading by example was more than enough to impress his head coach. 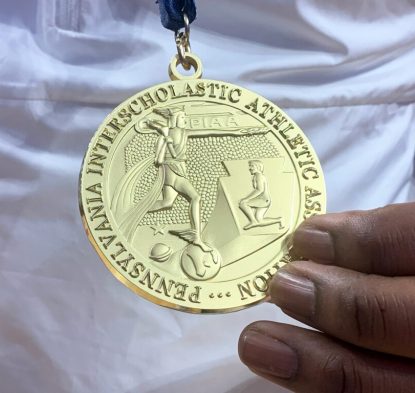 A Roman Catholic player proudly displays the PIAA championship medal all the players in Pennsylvania long for, and which is Roman Catholic’s in the Class 6A division for 2022. (John Knebels)

“He always say two things,” said McNesby. “‘I will do anything to help this team and whatever you need me to do, Coach … I’m all in.’ He has the respect of all of his teammates.”

“To assess my own game, I’d say I do everything that my coaches and my teammates need of me,” said Brown, a graduate of St. Athanasius School in Philadelphia’s West Oak Lane section. “I feel as though I can do a little of everything, and my strongest asset is on the defensive side of the ball. I love defense and I want the best assignment each night. I will do what I have to as I try to help my team win.”

According to Brown, playing in the state final against Archbishop Wood, which was the only PCL team to defeat the Cahillites during the regular season, was precisely what he and his teammates had preferred.

“We wanted another chance to play them,” said Brown. “The last time we played them, we played with absolutely no heart, and all my teammates can vouch for us on that. We did not give our best effort at all, and that’s no one’s fault but our own.”

Taking full ownership of a subpar performance: one of those “little things” that don’t show up in the form of a measured statistic.

NEXT: Neumann-Goretti’s state title a team effort for the ages