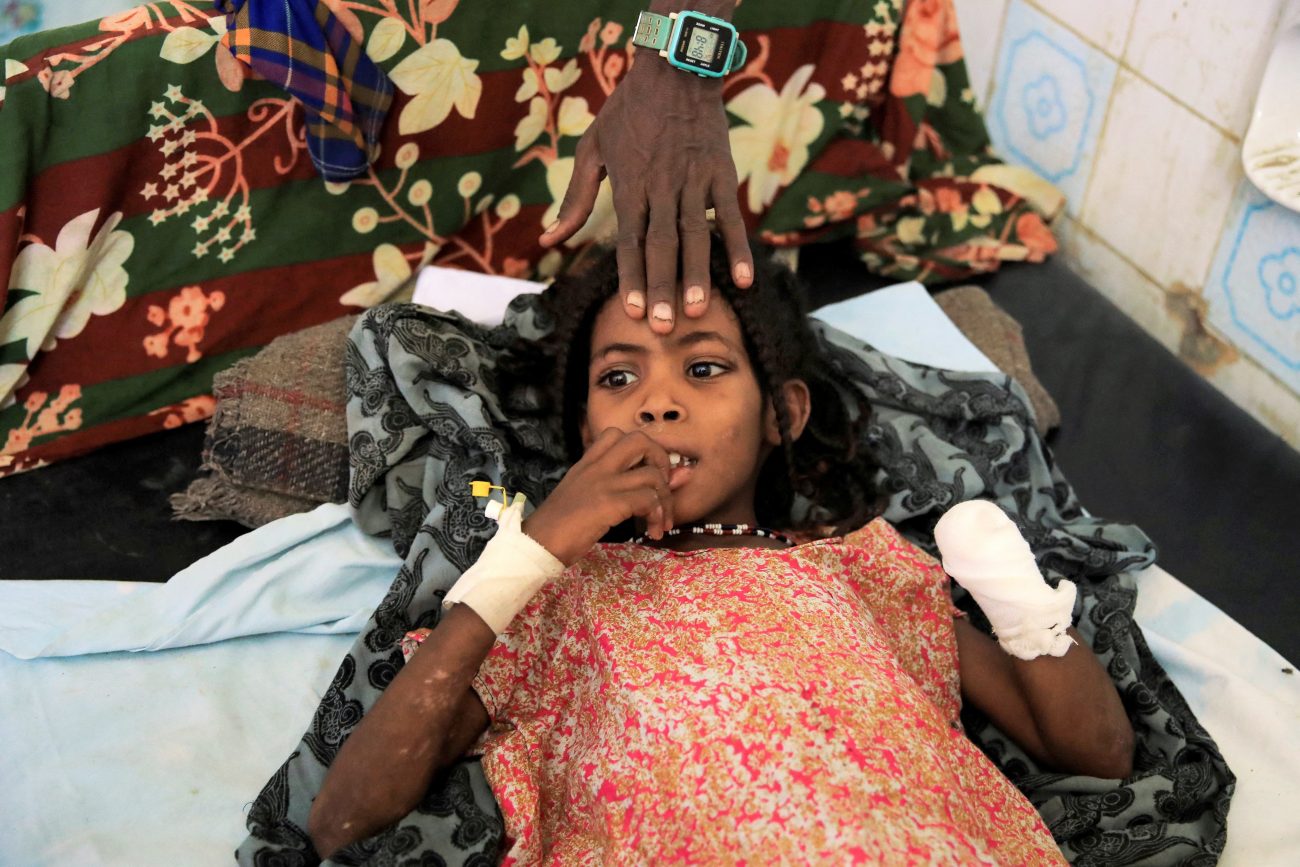 An 8-year-old girl receives treatment at Ethiopia's Dubti Referral Hospital Feb. 24, 2022. The girl lost her left hand from explosives left near her house in the aftermath of fighting between the Ethiopian National Defense Force and the Tigray People's Liberation Front. (CNS photo/Tiksa Negeri, Reuters)

NAIROBI, Kenya (CNS) — Some Catholic church sources from Ethiopia have corroborated a report by two international human rights groups detailing widespread abuses in the western part of the Tigray region.

The Human Rights Watch and Amnesty International report was published April 6, days after the government announced a humanitarian truce to allow relief aid to reach thousands of local people at risk of starvation. Catholic officials in Addis Ababa welcomed the cease-fire, even as the fighters — the Tigray People’s Liberation Front — agreed to uphold the cease-fire.

The report, “We Will Erase You from This Land: Crimes Against Humanity and Ethnic Cleansing in Ethiopia’s Western Tigray Zone,” said Western Tigray officials and security forces from the neighboring Amhara region — with possible participation of Ethiopian federal forces — have systematically expelled several hundred thousand Tigrayan civilians from the region, using threats since 2020.

“Ethiopian authorities have steadfastly denied the shocking breadth of the crimes that have unfolded and have egregiously failed to address them,” said Kenneth Roth, executive director of Human Rights Watch.

A church source who could not be named for security reasons told Catholic News Service: “It’s a very good report … of what is going on in Western Tigray, but the presence and abuses of the Eritrean government in the region should be highlighted.”

“The style of concentration camps and extrajudicial executions is the Eritrean government’s style. Some people say those responsible for the detention camps are the Eritrean military and security (forces).”

Western Tigray is a fertile administrative area in Tigray region, but its boundary and the identity has been the center of disputes since 1992. Two weeks into the Tigray conflict, Western Tigray came under the control of Ethiopia’s national army, allied forces and militia from the Amhara region.

The report recorded massacres, although one church source thought it should have included more. For instance, the report said, on Jan. 17, 2021, Amhara militias known as Fanos and local residents rounded up and detained dozens of male Tigrayan residents of the town of Adi Goshu, on the shores of Tekezé River. The soldiers rounded up and summarily executed about 60 Tigrayan men.

At detention camps across Tigray, many former detainees held at sites run by the Amhara forces and Fano militias died as a result of torture, denial of medical care, and lack of food and water. Others were killed by guards, according to the report. Some local media reports say the local authorities were moving mass graves to erase the evidence of massacre.

“The response of Ethiopia’s international and regional partners has failed to reflect the gravity of the crimes that continue to unfold in Western Tigray,” said Agnès Callamard, secretary general of Amnesty International.

The organizations want the Ethiopian government to ensure immediate and sustained access to the region for humanitarian agencies, the release of all detainees, investigations and prosecution of those responsible for the abuses.

The two organizations suggest the deployment of an African Union-led international peacekeeping force to protect civilians, enable delivery of aid and protect communities at risk, but some church sources expressed caution.

“AU had already taken side with Ethiopia and particularly Eritrea in their annual meeting in Addis Ababa, when they praised Eritrea for the works of peace in Ethiopia,” warned the church source.