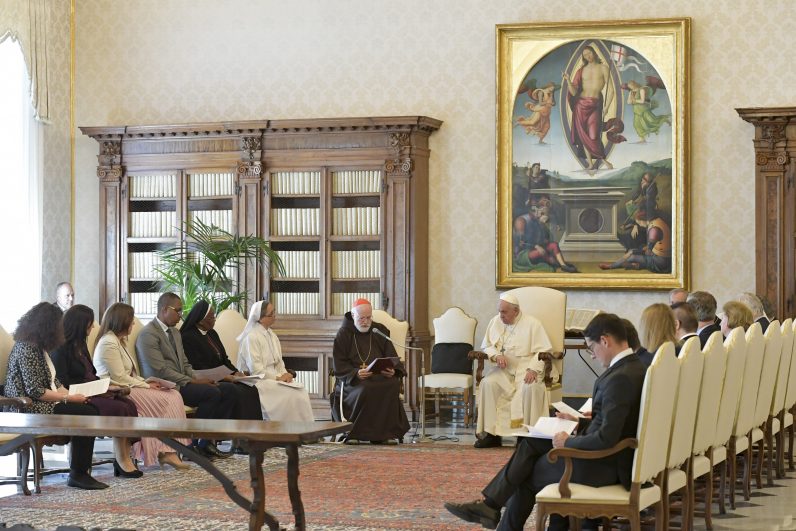 Pope Francis looks on as Boston Cardinal Seán P. O’Malley, president of the Pontifical Commission for the Protection of Minors, speaks during a meeting with commission members at the Vatican April 29, 2022. (CNS photo/Vatican Media)

VATICAN CITY (CNS) — Pope Francis asked his safeguarding commission to provide an annual audit of what the church is doing to protect minors and what needs to change, as well as to urge bishops’ conferences to set up special “centers” where victims can be heard and find accompaniment toward “healing and justice.”

The annual audit “report will be a factor of transparency and accountability and — I hope — will provide a clear audit of our progress in this effort,” he told members of the Pontifical Commission for the Protection of Minors April 29.

“Without that progress, the faithful will continue to lose trust in their pastors, and preaching and witnessing to the Gospel will become increasingly difficult,” he said.

The pope addressed the commission’s plenary assembly, which focused on how to best continue assisting the pope and the local churches in promoting best practices in safeguarding strategies, implementing guidelines and accompanying survivors.

Commission members also were looking how they will work within the Dicastery for the Doctrine of the Faith, according to Pope Francis’ reform of the Roman Curia, a change that goes into effect June 5.

As outlined in the apostolic constitution, “Praedicate Evangelium” (“Preach the Gospel”), the commission’s task remains providing the pope “with advice and consultancy and to propose the most appropriate initiatives for the protection of minors and vulnerable people.”

When the document was published in March, Cardinal Seán P. O’Malley of Boston, president of the commission and a member of the Council of Cardinals that drafted the constitution, said that linking the commission more closely to the doctrinal office “has made safeguarding and the protection of minors a fundamental part of the structure of the church’s central government” and would “lead to a stronger culture of safeguarding throughout the Curia and the entire church.”

Speaking to the commission members, the pope addressed a concern that the body would lose its independence now that it was within a larger dicastery.

“Someone might think that this could put at risk your freedom of thought and action or even take away importance from the issue with which you deal,” the pope said. “That is not my intention nor is it my expectation. And I invite you to be watchful that this does not happen.”

He said he did not want the commission to be like a “‘satellite commission,’ circling around but unattached to the organization chart” any longer, which had been an ongoing concern of members.

While the commission will be part of the dicastery that deals with the sexual abuse of minors by members of the clergy, the pope said, the president will be independent and appointed by the pope. “I have made your leadership and personnel distinct, and you will continue to relate directly with me through your president delegate,” who has been Cardinal O’Malley since 2014. The cardinal has also been a member of the Congregation for the Doctrine of the Faith since 2017.

The pope told the commission that he still wants them to provide “a proactive and prospective vision of the best practices and procedures that can be implemented in the entire church” and to “propose better methods to enable the church to protect minors and vulnerable persons and to assist the healing of survivors, in the recognition that justice and prevention are complementary.”

While many “important seeds” have been planted, “much remains to be done,” he said, and the reform “marks a new beginning.”

The pope told commission members it will be their responsibility “to expand the scope of this mission in such a way that the protection and care of those who have experienced abuse may become normative in every sector of the church’s life.”

This will require close collaboration with the doctrinal dicastery and all the other dicasteries of the Roman Curia for the commission’s own benefit and so “your work can enrich in turn that of the Curia and the local churches.”

Cases of the abuse of minors by clergy have been decreasing for several years, he said, at least in places where reliable data and sources are available.

The data is essential, the pope told the commission, so “I would like you, on an annual basis, to prepare for me a report on the church’s initiatives for the protection of minors and vulnerable adults.”

The aim, he said, is “to furnish a reliable account on what is presently being done and what needs to change, so that the competent authorities can act.”

He also encouraged them to help meet other “more immediate needs,” such as “the welfare and pastoral care of persons who have experienced abuse.”

He praised the commission for providing many opportunities to meet with and listen to survivors, saying they have been “of great help in my pastoral mission to all those who have turned to me following their painful experiences.”

“For this reason, I urge you to assist conferences of bishops in establishing suitable centers where individuals who have experienced abuse, and their family members, can find acceptance and an attentive hearing, and be accompanied in a process of healing and justice,” as indicated in “Vos Estis Lux Mundi,” which established procedures for reporting allegations of sexual abuse and for holding accountable bishops and religious superiors who protect abusers.

He reiterated that the presidents of bishops’ conferences are supposed to “establish commissions and the means needed to implement processes of care for persons who have been abused, with all the methods (of best practices) that you have, and for punishing abusers. And you must oversee this. I encourage you, please.”

“Abuse in any form is unacceptable,” Pope Francis said, and “the sexual abuse of children is particularly grave, as an offense against a life that is just beginning to flower.”

“Instead of flourishing, one who is abused is deeply injured, at times permanently,” he said. 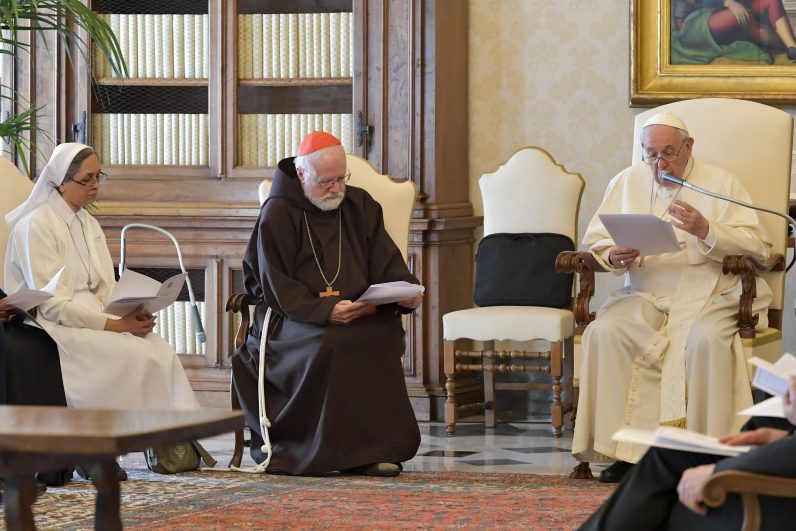 Pope Francis speaks during a meeting with members of the Pontifical Commission for the Protection of Minors at the Vatican April 29, 2022. Also pictured is Sister Arina Gonslaves, vice-provincial of the Religious of Jesus and Mary, and Boston Cardinal Seán P. O’Malley, commission president. (CNS photo/Vatican Media)

NEXT: Pope tells Russian patriarch they are not ‘clerics of the state’