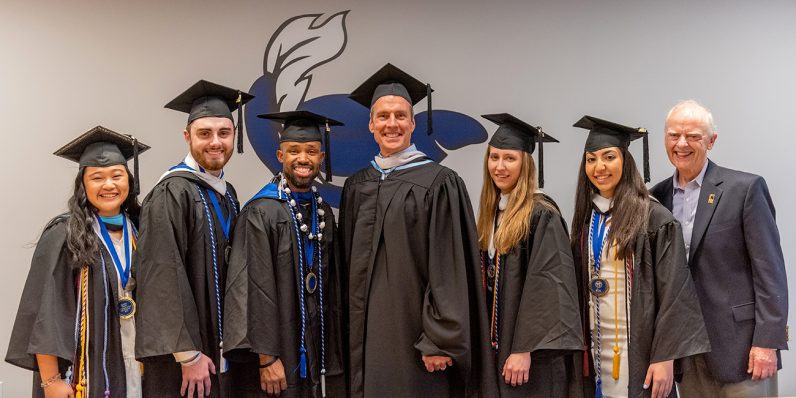 Among the graduates at Cabrini University’s three commencement ceremonies May 22 were six student ambassadors for Catholic Relief Services, who along with their fellow graduates heard from speaker Sean Callahan, president and CEO of CRS.

“This is a hopeful moment, and we need to be people of hope,” Callahan told the graduates and guests. “Yet as I say this, I know the world is being pulled apart.” He referred to news reports of mass shootings in the United States, the global COVID pandemic and the war in Ukraine.

Callahan encouraged students to “do the impossible,” saying he has seen that the impossible is possible through the 17-year relationship between CRS and Cabrini in which student ambassadors dedicate time during their college years to grow in global awareness, learn valuable advocacy skills and make a difference in the world.

During fall 2020, in the midst of the COVID lock down, Cabrini students still managed to advocate actively for the Global Thrive Act that became law in January 2021, much earlier than expected.

Cabrini CRS Ambassadors advocated by visiting about 15 virtual classrooms. They spoke with their fellow students and encouraged them to get involved by calling and writing to their government representatives.

“(Students) were excited to hear that the bill was passed,” said Cabrini graduate and CRS Ambassador president, Layal Srour. “We definitely felt we made an impact. It made us want to do more, want to help more.”

Srour, who is Muslim and the child of immigrant parents from the Middle East, emailed her congressional representatives including Rep. Mary Gay Scanlon, representing Pennsylvania’s fifth district, and U.S. Senator Pat Toomey.

Srour said she had never heard about CRS before attending Cabrini, but was attracted to CRS because “they help everyone” in need regardless of creed, race, or nationality.

“We called; we lobbied. When we saw the results of it, we were in awe,” said graduating Cabrini CRS Ambassador Ixchele Ortiz about advocating for the Global Child Thrive Act.

Ortiz was born in the Philippines and came to the U.S. when she was 15, settling in St. George Parish in Glenolden, Delaware County.

“CRS made me more open-minded,” she said, and also taught her to “go beyond the mindset of being comfortable to realize other people (around the world) might not be.”

In conversation after the graduation ceremony, Callahan told the six Cabrini CRS Ambassadors that CRS “really counted on” their advocacy for passage of the act.

“We heard back from senators and congress,” Callahan told the ambassadors, “and they said (the advocacy) was really super important to them” in getting the new law passed so quickly.

The successful lobbying by Cabrini students energized them to host more events during the next school year.

Last fall, Cabrini students hosted a panel discussion on immigration, and students, including Srour, shared their personal stories of immigrating to the U.S.

“I think it was inspirational for other people to hear who had similar journeys, or maybe they didn’t even understand (migration) journeys,” said Julie Lopez, a graduating Cabrini CRS ambassador and daughter of parents who migrated from Mexico. “It gave them that door of opportunity to see (the issue) from another person’s perspective.”

This spring semester, students hosted an event called “FoodFast,” which 70 people attended.  Participants were separated into groups. One group represented the world’s upper class, and were served a dinner of steak, mashed potatoes and fresh vegetable.

Another group represented the world’s middle class and were served a dinner of rice and tortillas.

Three groups of students represented the world’s lowest classes, and they were served a tortilla and glass of water, colored with tea to resemble dirty water.

After eating their meals, students participated in small and large group discussions.

Srour, who moderated the upper-class group discussion, said the conversation “focused on the emotional aspects, and how the upper class can feel apathetic for the middle and lower classes.”

Graduating Cabrini CRS Ambassador, Tariq Mines, led the middle-class group. About the meal of tortilla and rice, Mines said, “It sparked the conversation. Students asked, ‘How can we end hunger?’ Some said, ‘We can’t end hunger, but what can we do from here on out?’”

“People didn’t all agree,” Mines continued. “There were people who opposed, respectfully, certain views. We tried to come to a common ground.”

Mines, who was raised in the Kensington section of Philadelphia, said he has enjoyed his CRS involvement while studying at Cabrini because CRS doesn’t simply give aid to those in need, but “goes into the community, and they make it sustainable for them.”

They asked him, “’Is this all we get? Do we get to have seconds?’ I said, ‘No, you don’t get seconds in Rwanda. You might not get this much if you’re a child there, because the dad has to eat first.’”

Weatherly said the participants representing the lower class were angry upon hearing that the upper-class participants had a steak dinner, and this led to good group discussion.

“This is why we need people to understand that everyone has the same human dignity, the same human rights,” said Weatherly. “Helping these people might not be giving them food but teaching them how to (implement) a sustainable fix.”

“There were some people who defended the upper class,” said graduating Cabrini CRS Ambassador Faith Pitsikoulis, “and held views other people didn’t like, but I also think that’s very healthy for discussion.”

Pitsikoulis, whose home parish is St. Elizabeth in Chester Springs, describes herself as “very religious,” and said she’s always been interested in social justice, which led her to become a Cabrini student and CRS ambassador despite her busy schedule as a student athlete. Pitsikoulis played on the Cabrini women’s softball team.

Cabrini was the first college or university to partner with CRS, and now the official overseas development agency of the U.S. bishops has partnerships and programs with a total of 44 colleges and universities in the U.S., including locally at Villanova University and St. Joseph’s University. 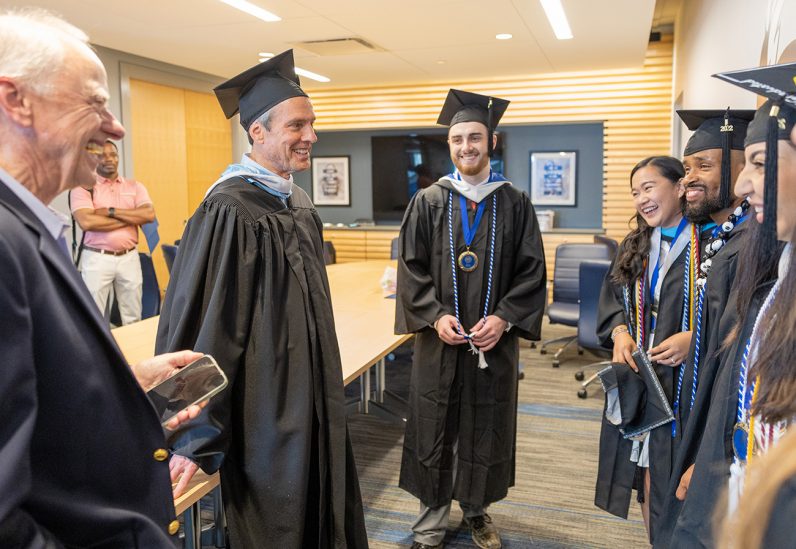 NEXT: Little learners cool off after long school year