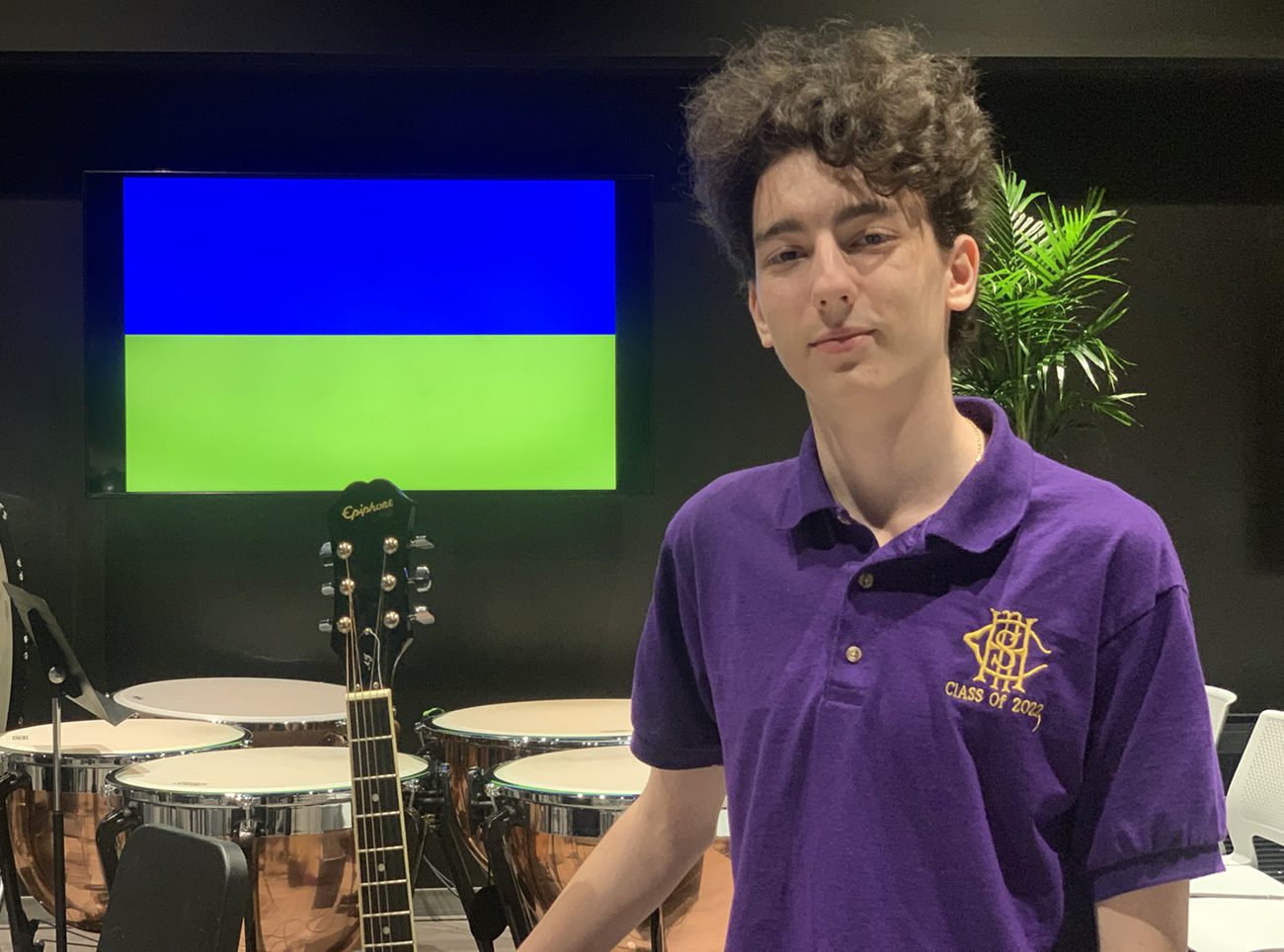 Matvii Lukavenko, a native of Ukraine and a senior at Roman Catholic High School, helped select music honoring Ukraine for the school's May 23 spring concert.

Students at an archdiocesan Catholic high school are finishing up the academic year with an artistic flourish, while showing their support for the people of Ukraine.

On May 23, Roman Catholic High School in Philadelphia hosted a celebration of its visual and performing arts in its Howard Center for the Arts, with more than 250 students, families and staff members in attendance.

(View a photo gallery of the May 23 art expo at Roman Catholic High School.)

The center’s display areas were filled with a range of creations spanning photography, videography and graphic arts, with handcrafted pieces in metal, wood, fabric and tile. Students also showed off their skills in pen, ink, watercolor and acrylic paints.

Senior Bill Hill presented a number of works he completed while studying photography, a subject he took up for the first time this year.

“It unlocked something that I didn’t know I really enjoyed,” said Hill, whose images included a self-portrait comprised of other pictures of himself.

Working with an actual DSLR (digital single-lens reflex camera) camera, rather than snapping pictures with a cell phone, was “definitely challenging at first,” Hill admitted, but thanks to having “a really good teacher,” he plans to “definitely continue photography” after graduation.

The evening’s highlight was a concert by the school’s bands and string ensemble, all under the baton of music director Ian Taylor. 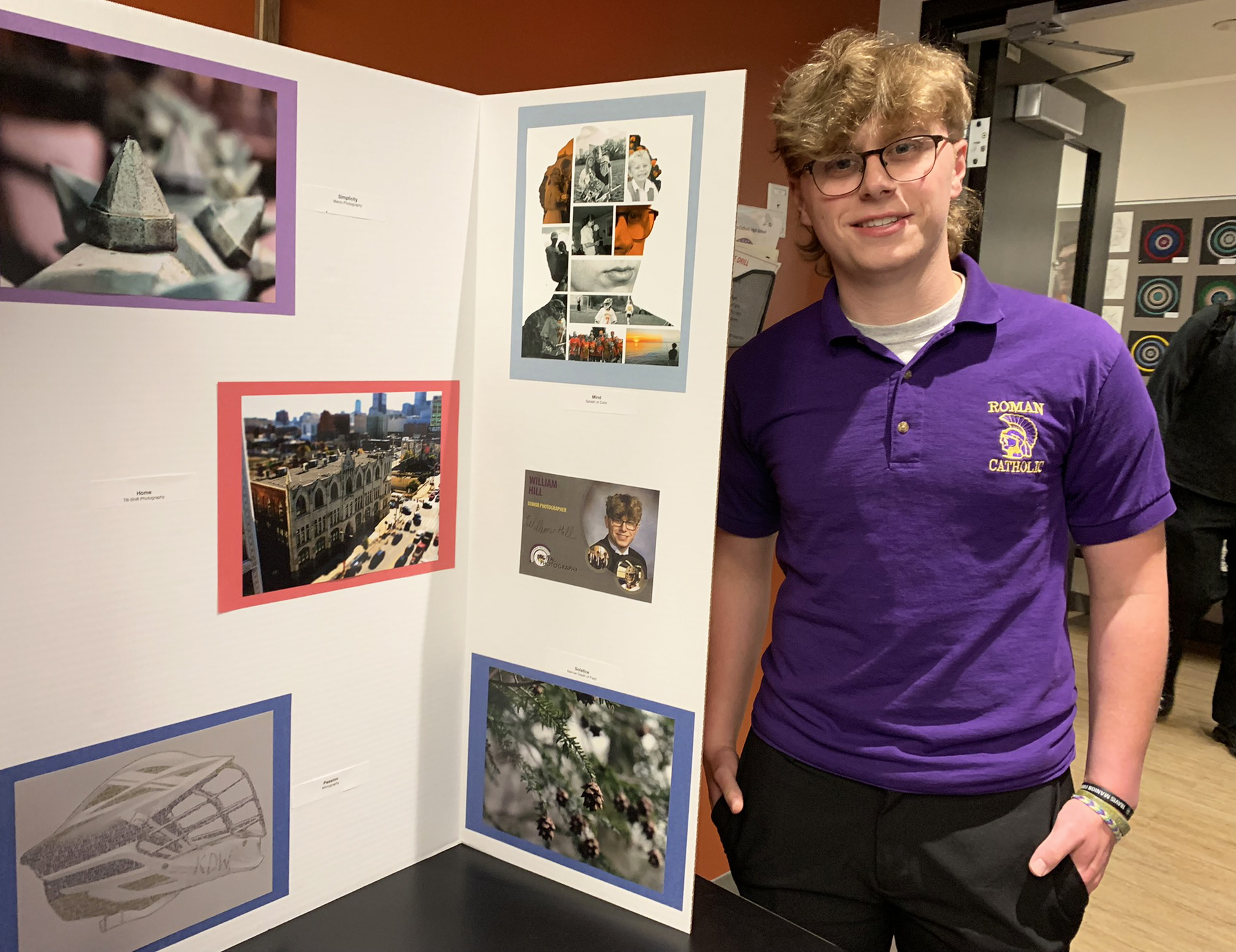 Roman Catholic High School senior Bill Hill, seen here with his photography exhibit at the school’s May 23 arts expo, said learning to use a professional camera had “unlocked something” within him. (Gina Christian)

The performances were dedicated to the people of Ukraine, whose “lives have been turned upside down” amid an ongoing invasion by Russia, said Roman president and rector Father Joseph Bongard.

He welcomed special guest Father Roman Pitula, rector of the Ukrainian Catholic Cathedral of the Immaculate Conception in Philadelphia, whose son Petro graduated from the school two years ago.

A native of Ukraine, Father Pitula blessed medals of St. Michael the Archangel, the patron saint of Ukraine’s capital Kyiv, for distribution to the concertgoers.

“Every moment, every second, many people die on both sides” of the war, said Father Pitula, noting that the conflict is “the most devastating” of some 20 wars now being waged across the globe.

Russia’s current invasion of Ukraine — which continues military attacks it launched in 2014, with the attempted annexation of Crimea and the backing of separatist regions in Donetsk and Luhansk – has been marked by particularly gruesome violence against civilians, prompting multinational calls for war crimes investigations.

Archbishop Borys Gudziak, metropolitan for Ukrainian Catholics in the U.S., said during a recent visit to West Catholic Preparatory School that “some 200 young lives” if not more are now being lost each day amid the fighting. 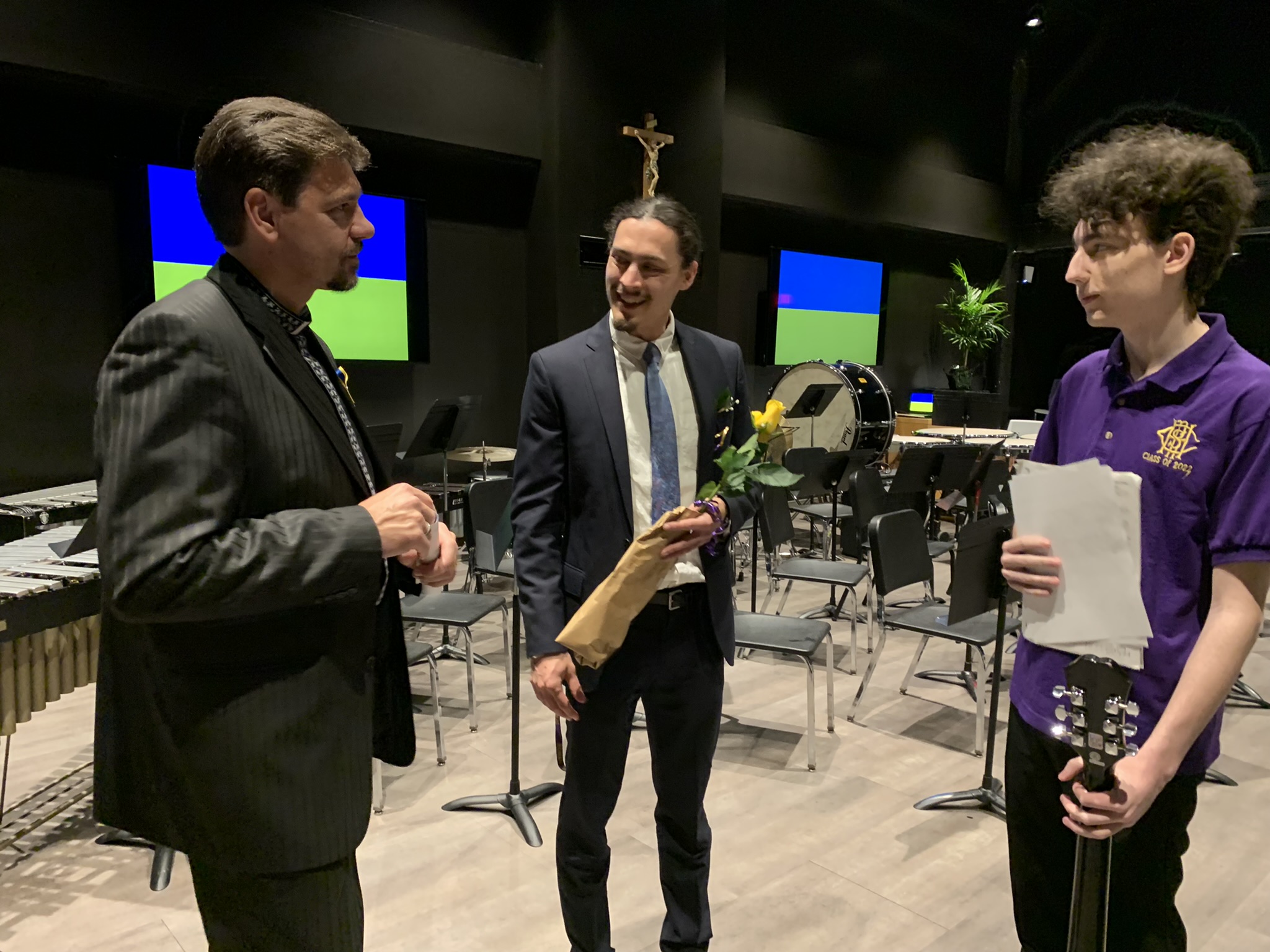 Such casualties, which defy international law regarding conflicts, reveal that “there are no rules to this war,” said Father Pitula, who thanked the U.S. “and all people of goodwill” for providing military and humanitarian support to Ukraine.

The concert program featured two specific works honoring Ukraine: “Melody” by acclaimed Ukrainian composer Myroslav Skoryk, who along with his family had been exiled to Siberia under the Soviet Union from 1947 to 1955; and American composer Brian Balmages’ “Kyiv, 2022,” a sequel to an earlier work entitled “Moscow, 1941.”

The pieces were drawn from a list assembled by Roman senior and concert band guitarist Matvii Lukavenko, who arrived in the U.S. from his native Ukraine just prior to the start of the school year.

Lukavenko noted “almost all of the (musical) pieces in Ukraine are in some form dedicated to (a) war, because Ukraine has suffered from Russia” since its origins.

At the same time, he remains hopeful about the outcome of the current conflict, which he feels Ukraine is “slowly but steadily winning” with an “inevitable” victory in view. 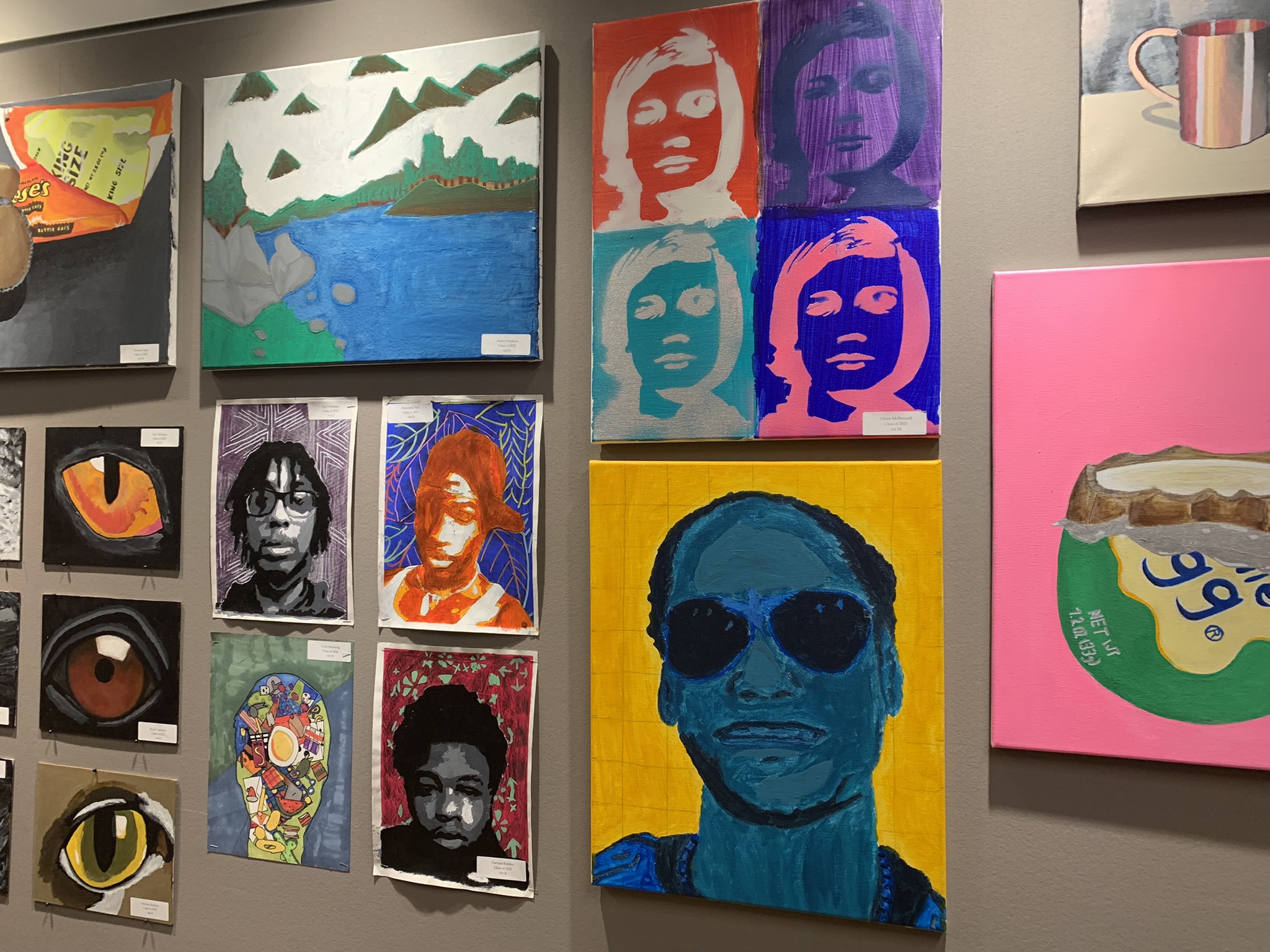 Taylor said he was grateful for Lukavenko’s insights in selecting the music, which he wanted to ensure was not merely “a token gesture” that “just sort of checked (the) box.”

“We wanted to do something that really made people stop and think, and that was an honest representation of Ukrainian culture,” said Taylor.

That approach is part of a broader commitment to inspiring an authentic love of the musical arts in students, he said, highlighting the support his office receives from the nonprofit Play On Philly, which expands musical education access.

“There’s a lot of talk, especially when it’s the STEAM (science, technology, engineering and mathematics) conversation, about how music helps students to do better in their math class,” said Taylor. “And that’s all true, but I think we have to recognize as a culture that music is just an important part of our lives.”

The recognition is a timely one in times of both war and peace, he said. 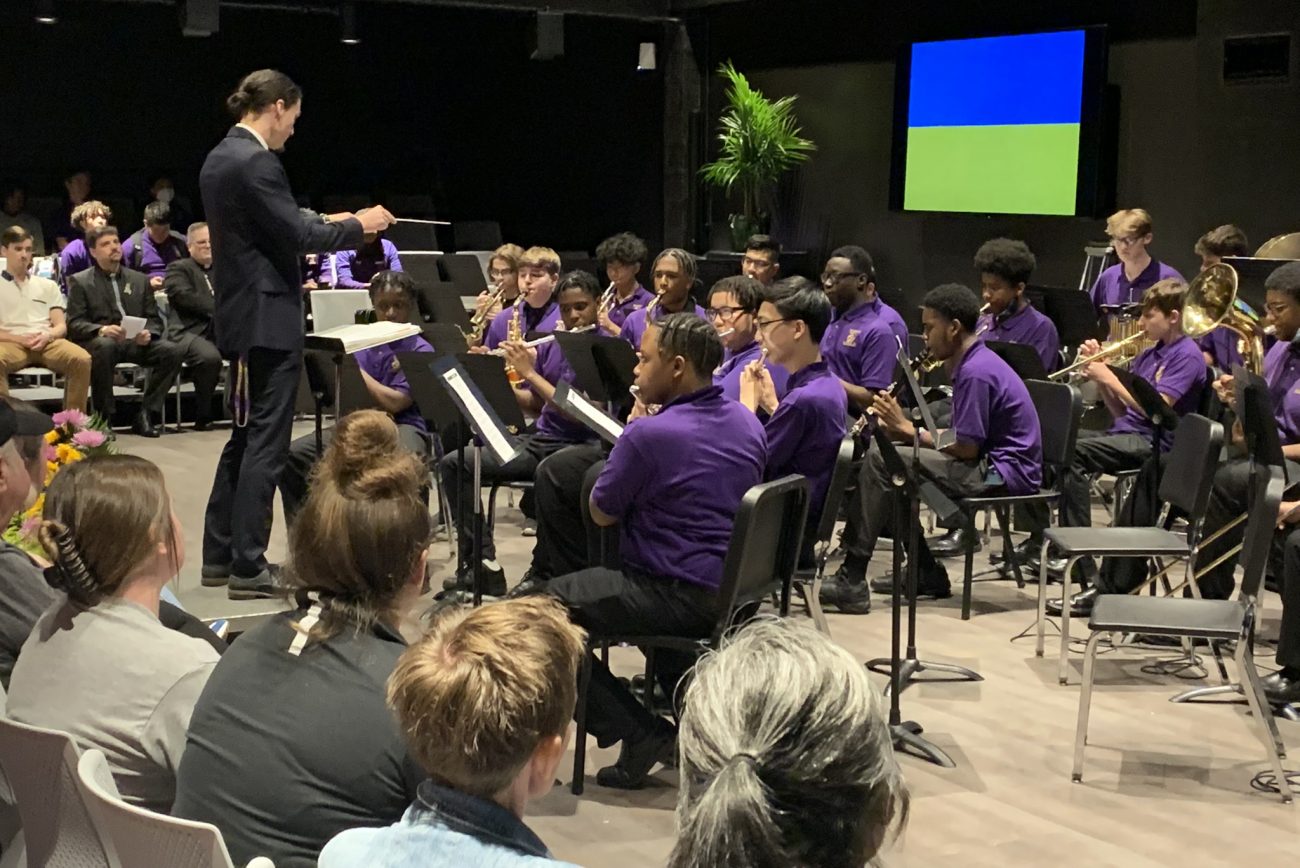