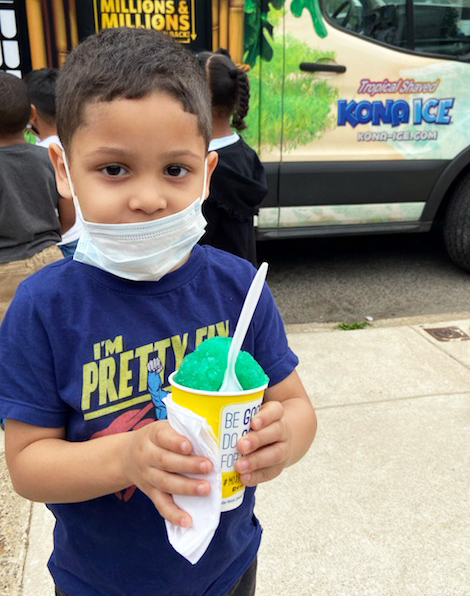 A student at Catholic Social Services’ Casa del Carmen Preschool Academy in Philadelphia enjoys a shaved ice to close out the academic year, May 27. (Shari Gold)

Kids at an archdiocesan learning center recently gave adults a lesson on beating the heat — and enjoying life’s simple pleasures amid distressing times.

On May 27, students at Casa del Carmen Preschool Academy celebrated the end of the school year by digging into shaved ice cones from a local Kona Ice truck.

The tropical treats – which satisfied both taste buds and U.S. Department of Agriculture school food guidelines – were a welcome reward for the little learners at the school, located in Philadelphia’s Hunting Park section.

The academy is one of the many programs offered through Casa del Carmen, an archdiocesan Catholic Social Services (CSS) family service center that has assisted the Latino population of North Philadelphia since 1954.

In recent years, enrollment has spiked at the preschool academy, which has earned high marks with its funding and regulatory partners. The Pennsylvania Department of Education gave the school its highest rating in recognition of Casa’s responsive early education strategy and overall management.

Amid the ups and downs of  COVID, “the children are doing great,” said academy director Shari Gold.

“This past year has pretty much been the same as last year,” she said. “The five-year-olds have started getting vaccinated, but we are still waiting for the three- and four-year-olds to be approved for vaccination.”

At present, students and staff “are still masking and will continue to do so until all of us are vaccinated,” said Gold.

Despite students’ resilience, the pandemic has left an impact, she added.

“We have seen an uptick in children with individualized education plans this year, especially in speech,” said Gold. “We can attribute that to many of these young children never being in child care before the age of three because of the lockdown.”

Looking ahead to summer, Gold hopes parents and kids will continue to spend time reading together, and to “(explore) the world around them.”

But as they took a well-deserved break from the books, the Casa kids – who receive instruction in English and Spanish – were too busy enjoying their cones to speak with reporters in detail about much of anything — including shaved ice, a dessert with a long and cosmopolitan history.

Shavings from a steady supply of ice blocks Roman emperor Nero kept on hand were sometimes sweetened with honey and fruit as a dessert. In Japan, courtiers from the Heian period (794-1885 A.D.) cooled off with shaved ice flavored by syrup, a dish that eventually came to be known as kakigori, now a staple in the Asian nation.

Although it’s spanned centuries, shaved ice is a reminder to savor the moment, judging from the smiles on the faces of the Casa kids.

And for 56 of them, those smiles are about to get bigger — they’re set to graduate, in full academic attire, on June 24 at a drive-through ceremony with the theme “Kindergarten, here we come!”

We’ll raise a shaved ice to that.

NEXT: St. Cornelius students ‘pedal for a purpose’