Sister Ann Newell, IHM, (formerly known as Sister Loyola Marie) of the Sisters, Servants of the 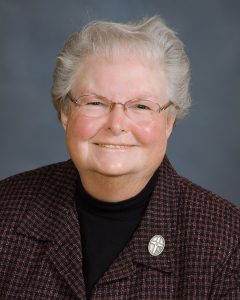 Immaculate Heart of Mary died on Tuesday, May 3, 2022 at Our Lady of Peace Residence in Scranton.

She was born on March 30, 1936, in Philadelphia, PA, and given the name Ann Patricia. She was the daughter of the late Michael F. and Ellen Cannon Newell. She entered the IHM Congregation in Immaculata, PA, on September 8, 1955, made her temporary profession of vows on August 15, 1957, and her final profession of vows on August 15, 1962. She joined the IHM Congregation in Scranton, PA, on June 24, 1982.

Sister Ann also served as education and vocation counselor at Covenant House in New York, NY, from 1986 to 1992; pastoral associate at Church of the Nativity in Fair Haven, NJ, from 1992 to 1996; associate director at St. Pius X Spiritual Life Center in Blackwood, NJ, from 1996 to 1997; director of campus ministry at East Stroudsburg University in East Stroudsburg, PA, from 1997 to 2000; pastoral associate at St. Paul Parish in Burlington, NJ, from 2000 to 2005; receptionist at Lourdesmont Youth and Family Services in Clarks Green, PA, from 2005 to 2007; support services for the IHM Congregation in Scranton, PA, from 2007 to 2013; and an English as a Second Language Program instructor at St. John Neumann Parish in Scranton, from 2013 to 2019.

From 2019 until the time of her death, Sister Ann was a prayer minister at Our Lady of Peace Residence in Scranton.

She is survived by a sister-in-law, Margaret Newell of Delmar, NY; and nieces and nephews. She is also survived by members of the IHM Congregation.

The funeral was held Friday, May 13, at 12:00 p.m. with Mass of Christian Burial at Our Lady of Peace Residence. Interment followed at St. Catherine’s Cemetery in Moscow, PA.