Sister Jean Clare Rohe, OSF, 104, the oldest member of the congregation, died in Assisi House on Monday, May 16, 2022. She had been a professed member of the Sisters of St. Francis of Philadelphia for 84 years. 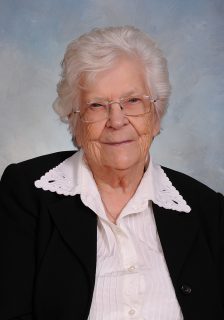 Sister Jean Clare (Regina Catherine Rohe) was born in Baltimore, Maryland, where she was a member of St. Joseph Parish in Fullerton and attended Seton High School. She entered the congregation in 1935 and professed her first vows in 1938. Her sister, Sister Ellen Patricia Rohe, and cousins, Sister Alice Rohe and Sr. John Catherine Rohe (all deceased), were also members of the congregation.  Sister Jean Clare earned a B.S. in education/biology from Mount St. Mary University in Emmitsburg, Maryland, and an M.S. in education/biology from Morgan State University in Baltimore. She ministered primarily in education.

Sister Jean Clare ministered for 48 years in the Archdiocese of Baltimore. She taught at Immaculate Conception School in Towson, SS. Philip and James School, The Catholic High School of Baltimore, and Our Lady of Mt. Carmel High School in Middle River. After she retired from teaching, she worked in the rectory at St. Anthony of Padua Parish.

During her 27 years of service in the Diocese of Wilmington, Sister Jean Clare taught at St. Paul School, Padua Academy, and St. John the Beloved School.

In 2014 Sister Jean Clare moved to Assisi House, the congregation’s retirement residence in Aston, Pennsylvania, where she served in prayer and hospitality ministry until her death.

Services were held at Assisi House on Monday, May 23, 2022 followed by a Mass of Christian Burial. The oldest of nine children, Sister Jean Clare is survived by her sisters Dorothy Schraml, Annabelle Thomann, Mary Catherine Kahl, Dolores Rigby, and Rose Marie Smith; her brother Eugene T. Rohe; her many nieces and nephews; and her Franciscan family.

NEXT: Sister Kathleen Leary, writer and editor for CS&T, dies at 88