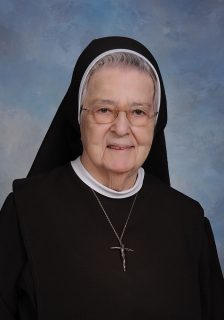 Sister Francis Paul Torre, OSF, 95, died in Riddle Hospital on Tuesday, May 3, 2022. Sister Francis Paul wasborn Antonette Torre in Brooklyn, New York, where she was a member of St. Francis Paola Parish. She graduated from Mt. St. Dominic Academy in Caldwell, New Jersey. In 1943 she entered the Franciscan Sisters of Ringwood, a congregation which later merged with the Sisters of St. Francis of Philadelphia, and professed her first vows in 1944. She had been a professed member of the congregation for 78 years. Sister Francis Paul earned a B.S. in education from St. John University.  She ministered primarily in education, social work, and administration.

Sister Francis Paul ministered for 46 years in the Diocese of Paterson. She began her ministry there in education and served for eight years at St. Francis School in Haskell, five years at St. Catherine School in Ringwood, and a short time as superior of the Boy’s Camp in Ringwood. Fourteen of her years in the diocese were spent in administration for the Sisters of St. Francis of Ringwood as well as 19 years as administrator of St. Joseph Residence in Ringwood.

Sister Francis Paul spent 19 years in the Diocese of Brooklyn, where she taught and served as principal of Holy Family School for 13 years. She also taught at St. Benedict School and ministered in social work and parish ministry at St. Blaise Parish, Holy Family Parish, and St. Francis Paola Parish.

Additional ministry work included one year in the Diocese of Newark at St. Ann School in Hoboken, New Jersey.

During her 11 years in the Archdiocese of Philadelphia, Sister Francis Paul served as a volunteer in the finance office of Our Lady of Angels Convent in Aston. In ­­­­­2019, she moved to Assisi House in Aston, Pennsylvania, where she served in prayer and hospitality until her death.

Services were held in Assisi House on Tuesday, May 10, 2022 followed by a funeral liturgy. Interment of her ashes followed at Our Lady of Angels Cemetery in Aston. Sister Francis Paul is survived by her sisters, Rosina Torre and Theresa Fulford, her many nieces and nephews, and her Franciscan family.

NEXT: Sister Ann Newell dies at 86