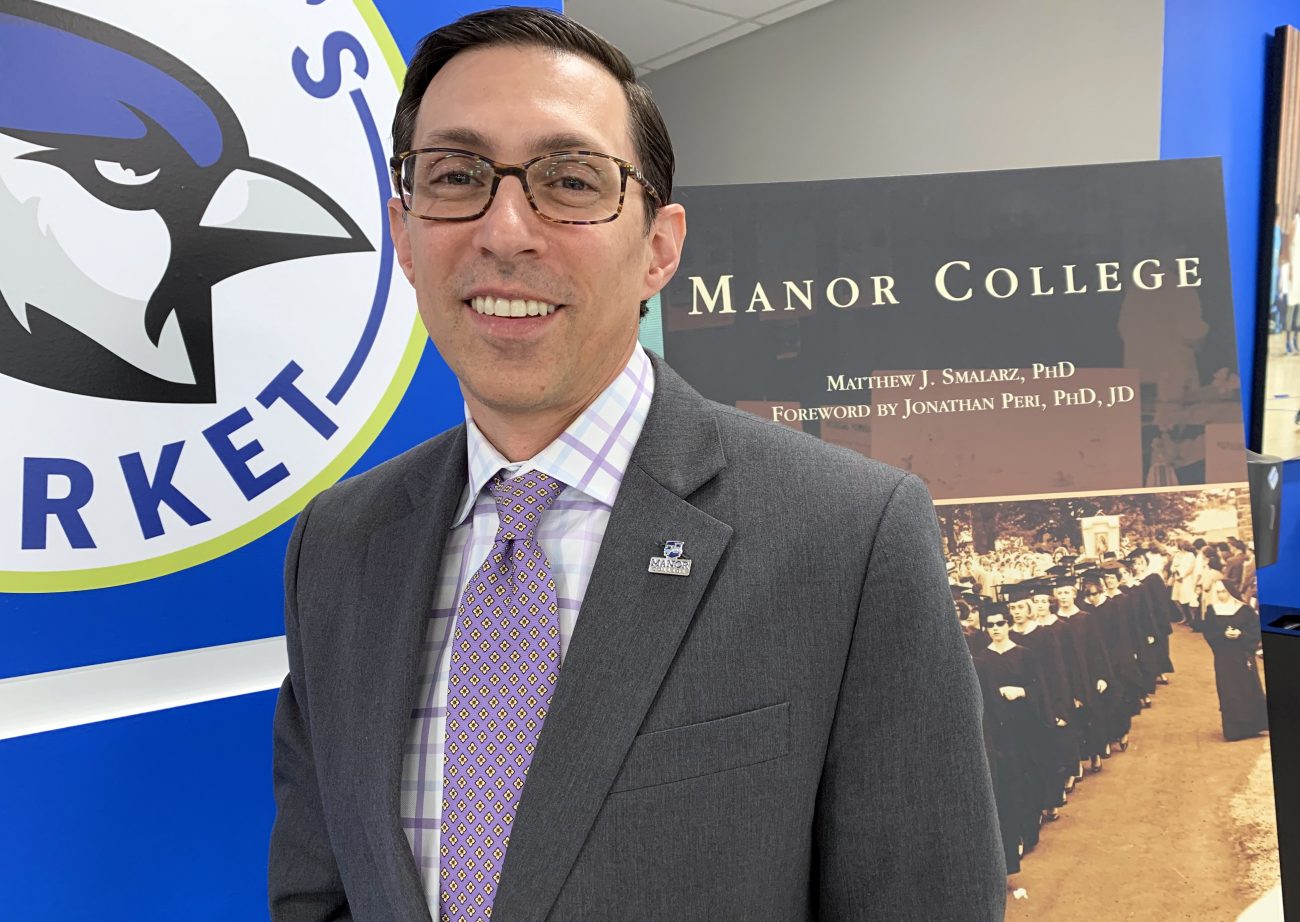 Dr. Jonathan Peri, president of Manor College, said he has been guided by his faith along a journey that has spanned theology, law and a key role in the Ukrainian American community at a crucial moment. (Gina Christian)

A local Catholic college rooted in the Ukrainian-American community is a “mission school” for transforming the world, said its president – whose own life has been profoundly shaped by his faith in Christ.

Now in its 75th year, the school — founded as St. Macrina College by the Ukrainian Sisters of the Order of St. Basil the Great – has galvanized a broad range of support for Ukraine, currently in the fifth month of a brutal Russian invasion.

The war, which has killed thousands and displaced at least 12 million, continues assaults initially launched by Russia in 2014 with the attempted annexation of Crimea and the backing of separatist factions in Ukraine’s Donetsk and Luhansk provinces.

Amid the latest attacks, which have also endangered global food supplies, Peri said he has experienced “the normal stages of grief and anger,” as well as a deeper reliance on the divine.

“There’s a piece of it where you ask God to guide you, and to give you instruction and direction that you might be his instrument,” said Peri, a member of SS. Simon and Jude Parish in West Chester. “You ask questions, and you receive answers through prayer.”

In the process, Peri has had what he calls a “mini-epiphany moment” about his own personal journey, which spans growing up on Long Island in an Italian-American home to playing a key role in the Ukrainian-American community at a crucial time.

“We are at an inflection point in human history,” said Peri. “There’s a much bigger picture here with the war, in terms of the structure of Western civilization. Leaders have a choice: they can either allow the kind of incrementalism that authoritarianism is going to push for, or push back through democracies that have greater values. And pushing back means supporting Ukraine.”

‘Incredible shoes to fill,’ with God leading the way

As the first lay president of Manor College, Peri said he’s keenly aware that he has “incredible shoes to fill,” but believes his path has been traced by God, with Catholic education as a starting point.

He then entered law school at Widener University, a move that for Peri was seamless.

“I viewed theology as not just theology, but also philosophy,” he said. “And when you connect that with the philosophy of law, it’s a clearer pathway than it might seem at first blush.”

“It could be tough,” he said. “My faith sustained me. … It was about protecting people, doing the right thing and making sure justice was served, but it was also about restoration where possible.”

Through his adjunct teaching positions, Peri found himself increasingly drawn to educational leadership. He earned advanced degrees from Harvard University and Eastern University, becoming vice president and general counsel of Neumann University from 2006 to 2015. Shortly after joining Manor, he also served for two years as interim board chairman at Archbishop Ryan High School.

Peri said he gives “a major shout-out” to the Basilian Sisters for their mentorship of his career.

“What they do really, really well is love everybody,” he said. “I don’t know that I have ever found more loving people. They’ve invited everyone to their educational table.”

That table is a place of charity, he said, modeled after the Basiliad – the pioneering complex for social, medical and spiritual care founded by St. Basil the Great in 369 at Caesarea.

“He wanted to create a city where those essential human needs were cared for,” said Peri. “And we’re a Basiliad here at Manor, with the Sisters and the Basilian Spirituality Center, educating and nurturing.”

Peri has worked to make Manor affordable and accessible for a diverse population of students, who also benefit from a campus food pantry and a career closet.

“You can’t nourish minds in the absence of nourishing the body,” he said. “And if you’re going to school, paying rent, working and maybe supporting a family, where are you going to get the money to buy a suit for that first interview?”

A voice for faith, and for Ukraine

Given Manor’s legacy and the vibrance of the region’s Ukrainian community, Peri has prioritized efforts to highlight the school as “a voice for contemporary Catholicism and Christian goodness, and the way those worlds meet between Ukrainian and American culture.”

Since 1977, the school has been home to the Ukrainian Heritage Studies Center and Museum, and during his tenure Peri has advanced that mission by establishing a Ukrainian community committee, a “Ukraine Dialogues” speaker series, and – in the wake of Russia’s Feb. 24 invasion of Ukraine – numerous humanitarian efforts and partnerships, including a Ukrainian refugee scholarship. 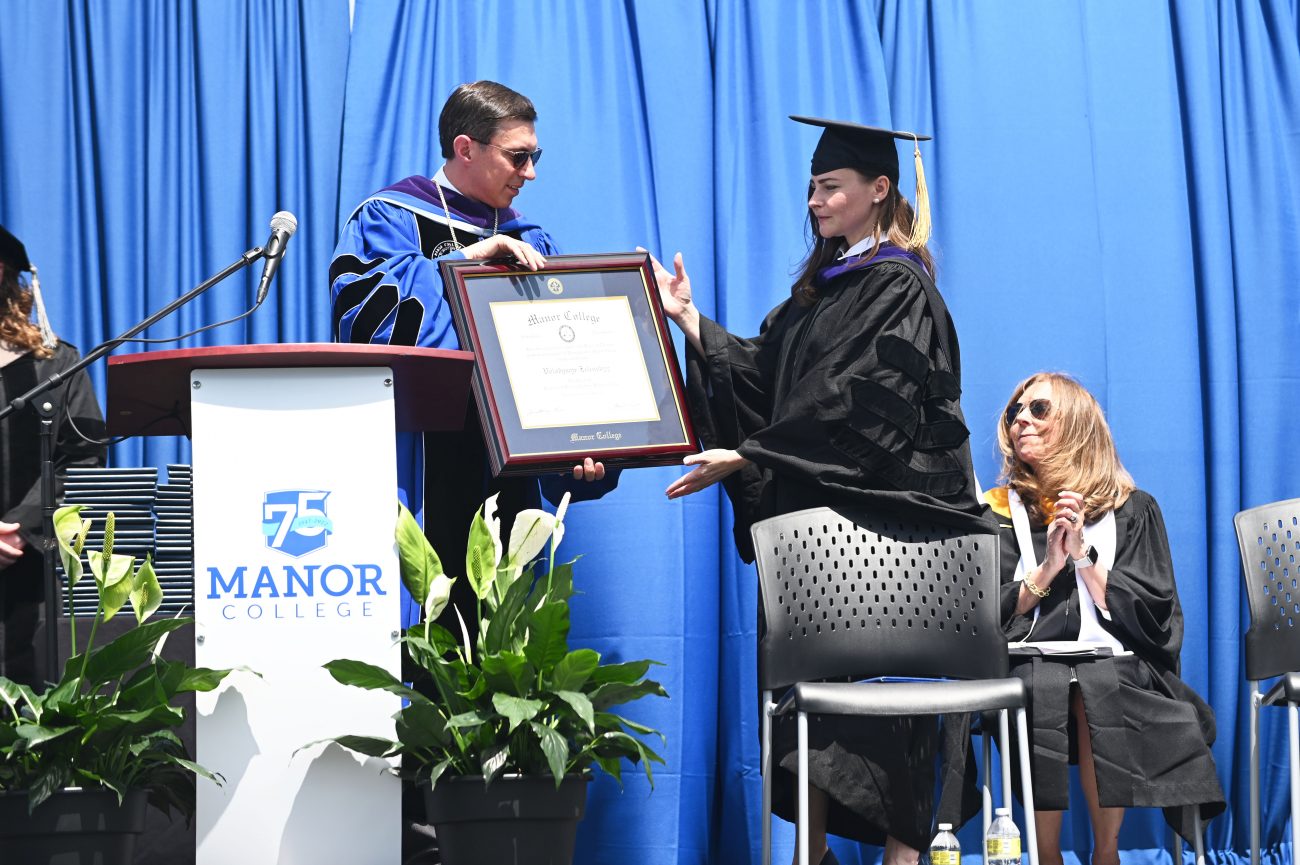 Manor’s website lists “every (relief) organization we were able to identify on our own, and in conjunction with the embassy, as credible and worthy of people’s gifts and funding,” said Peri.

The school – which has vigorously denounced the war, while calling for international aid and prayer — led a coalition of U.S. colleges and universities in conferring an honorary doctorate on Ukraine President Volodymyr Zelenskyy this spring.

“Zelenskyy has shown bravery, charity and compassion for his people, in his willingness to be physically present (to them) the way Christ was with us,” he said.

For his own part, Peri said he has embraced “the charism of Basilianism wholeheartedly” – and he in turn has been welcomed by the Ukrainian community.

At one gathering, Ukraine Ambassador to the U.S. Oksana Markarova told Peri he was “adopted as Ukrainian,” he said.

And that identity is part of an eternal one that begins here and now, said Peri.

“We’re asked by Christ to build the kingdom of heaven on earth,” he said. “We’ve got the Basiliad here, and it’s real. I just feel so blessed.”

PREVIOUS: As 1st Haitian priest in Phila., seminarian to carry on a legacy