Lack of hope must be met with listening heart, pope says 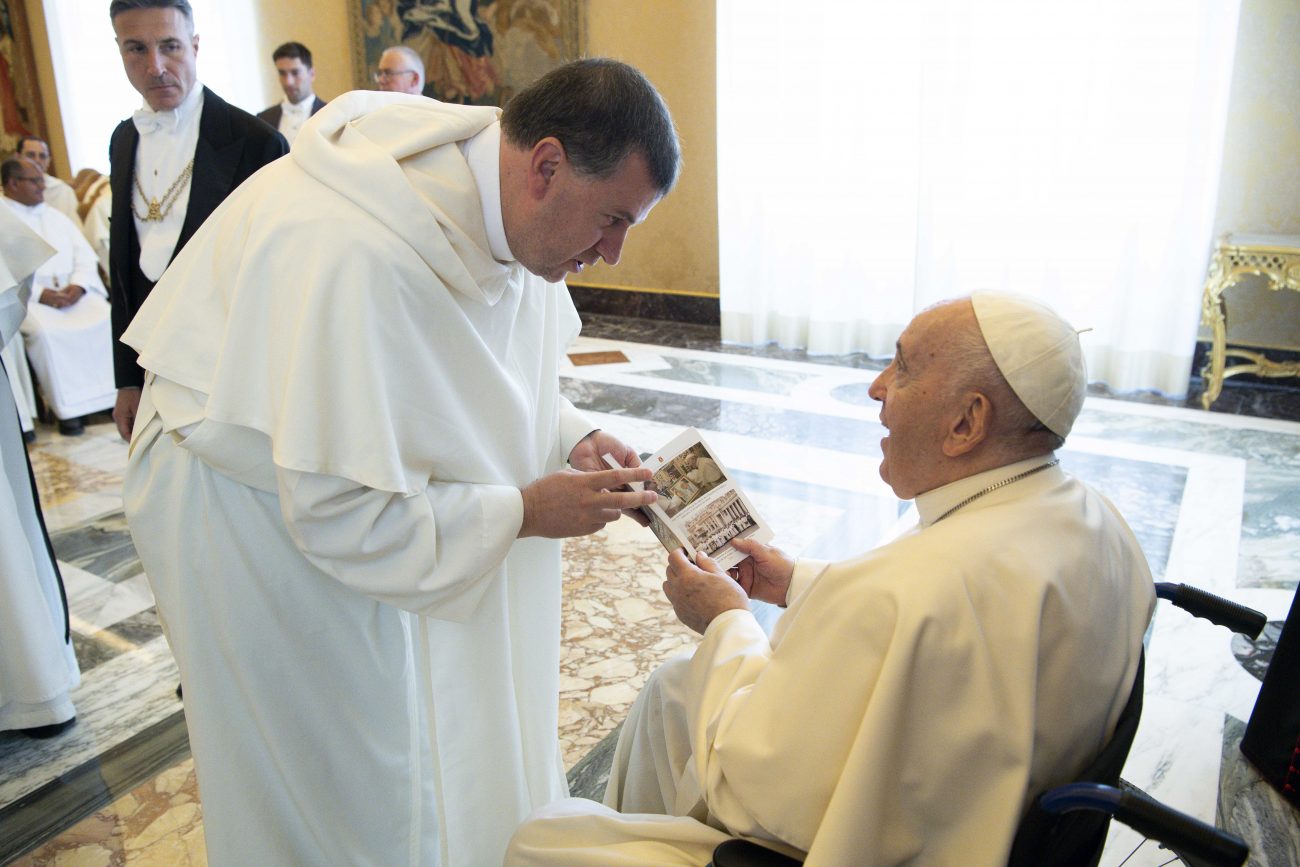 Pope Francis accepts a gift during an audience with members of the Order of the Blessed Virgin Mary of Mercy, also known as the Mercedarians, at the Vatican May 7, 2022. The lack of hope and the sense of helplessness in the world is an opportunity for those in religious life keep an open ear both to God and to the sufferings of others, the pope told the group. (CNS photo/Vatican Media)

VATICAN CITY (CNS) — The lack of hope and the sense of helplessness in the world is an opportunity for those in religious life keep an open ear both to God and to the sufferings of others, Pope Francis said.

During an audience May 7 with members of the Order of the Blessed Virgin Mary of Mercy, also known as the Mercedarians, the pope said that just as Mary told servants at the wedding in Cana to do as Jesus said, she also urges Christians today to listen to Christ to fulfill their mission.

“Many realities that we can see today in the world, in the church, in the order, speak to us of this scarcity, this lack of hope, of motivation, of solutions. In the face of this, Our Lady asks you: Listen!” he said.

Founded in 1218 by St. Peter Nolasco, the Mercedarians’ mission was to ransom poor Christians held by Muslims during the Crusades.

According to the order’s website, the “friars of the Order of Mercy continue to rescue others from modern types of captivity, such as social, political and psychological forms. They work in jails, marginal neighborhoods, among addicts and in hospitals.”

Reflecting on the Gospel account of the wedding feast in Cana, the pope said that just as the Mercedarians are meeting in their general chapter, perhaps the servants at Cana, upon realizing the wine was running out, also met to discuss how to solve the problem.

“There were probably voices that raised the issues, others that provided workable — if not risky — solutions, and perhaps others that recommended that the guests be sent away in an honest way, recognizing their own inability to cope, that they were running out of wine,” he said.

However, in telling them to fill the jars with water, “Jesus does not tell them what they expect, but precisely something they would never have imagined hearing.”

“Let us open our hearts to welcome the surprise that Jesus brings us. I do not know what it will be and neither do you,” the pope said. “Throughout your general chapter, things will come to light that some of you thought and others the Lord will bring that are completely new.”

Pope Francis encouraged the Mercedarians to “not be afraid to be surprised,” and to be close to Christ “through the suffering flesh of the poor” and those who are held captive by new forms of “slavery.”

“Today, we can say that there are more slaves than in the times when you were founded, certainly,” the pope said. “The new slaveries, those that are concealed, those that are not known, those that are hidden, but there are so many of them. Even in major cities — like Rome, London, Paris — there are slaveries that continue. Look for them and ask the Lord: What do I do?”

NEXT: Liturgy must lead to awe, unity, mission, pope says