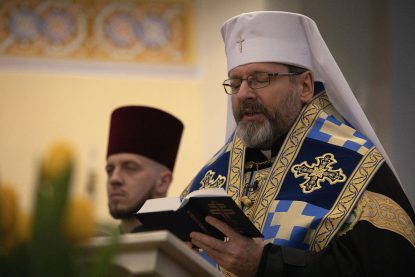 Archbishop Sviatoslav Shevchuk of Kyiv-Halych, major archbishop of the Ukrainian Catholic Church, is pictured in a March 25, 2022, photo. In a video address to members of the Pontifical Council for Promoting Christian Unity May 6, the archbishop said Russia’s reasons for attacking Ukraine are nothing more than an excuse to justify its ultimate goal of wiping out the country’s people. (CNS photo/Ukrainian Catholic Church)

VATICAN CITY (CNS) — The head of the Ukrainian Catholic Church said Russia’s reasons for attacking Ukraine are nothing more than an excuse to justify its ultimate goal of wiping out the country and its people.

Archbishop Sviatoslav Shevchuk of Kyiv-Halych said that although Russian President Vladimir Putin has said “demilitarization and denazification” are the primary reasons for invading Ukraine, Russian military tactics are following “a genocide manual” in which “the entire people must be eliminated.”

Archbishop Shevchuk made his remarks in a video call to the plenary meeting of the Pontifical Council for Promoting Christian Unity, of which he is a member, and he spoke about the war’s impact on ecumenical dialogue, according to a statement released May 6 by his office.

Russia’s invasion and ongoing war on Ukraine, now entering its 70th day, has caused a “humanitarian catastrophe” with millions forced to flee the country or be displaced internally, he said.

Nevertheless, amid the tragedy of war, religious groups in Ukraine are “united like never before,” he said.

“Just on the eve of the Russian attack, when we had already received news and foreign ambassadors were leaving the city of Kyiv, in a night session, the council (of churches and religions) made an appeal to the Russian president to stop,” he recalled. “We proposed ourselves as the mediators; if the diplomats, the politicians were not able to avoid the armed conflict, we wanted to be the mediators of peace, men and women of the church.”

The Ukrainian archbishop also denounced the stance taken by Russian Orthodox Patriarch Kirill of Moscow, whose justifications of the war pose “a great danger not only for the Russian Orthodox Church, but for Christianity in the modern world.”

Communities of the Moscow Patriarchate in Ukraine, he added, feel “neglected and forgotten,” considering that “most of the churches destroyed are their own.”

He also compared the Russian patriarch’s stance on Ukraine to that of the Islamic State regarding Iraq and Syria.

“Unfortunately, the Russian Orthodox Church has been trapped in Putin’s doctrine of the state, which already had an explicit broad condemnation from Orthodox theologians a month ago,” Archbishop Shevchuk said.

The head of the Ukrainian Catholic Church said the war in Ukraine raises two important issues that the Catholic Church must reflect on: the church’s social teaching on war and peace and its explanation of the relationship between church and state.

“There is an obvious need to work out the correct language to describe the new challenges in these areas but also to have the courage at the ecumenical level to find the right answers to these dangers,” he said.

NEXT: God ‘does not disown his children,’ pope tells LGBT Catholics