Eucharist is ‘the one constant’ on journey of life, says archbishop 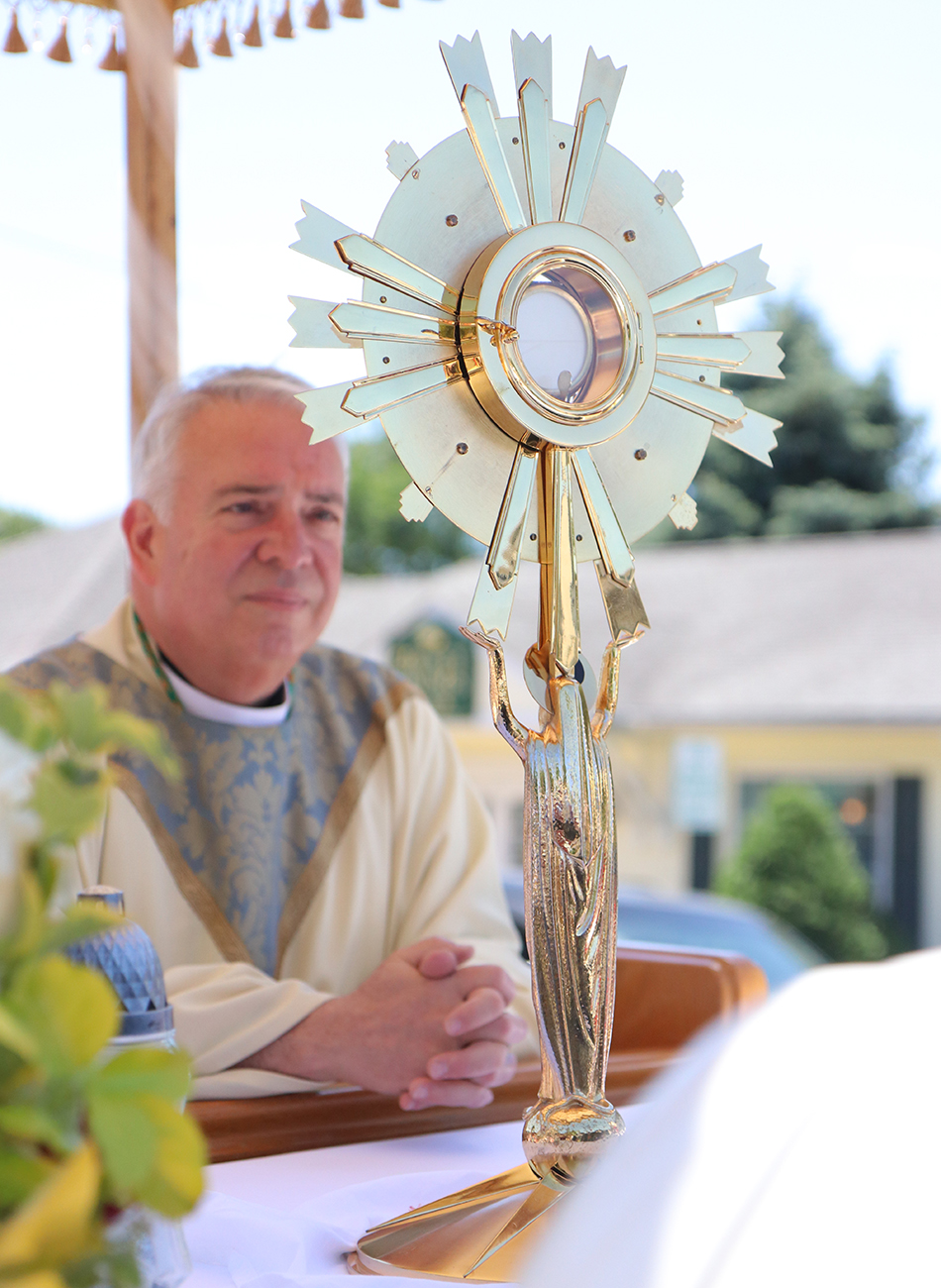 Archbishop Nelson Pérez kneels before the Blessed Sacrament during a June 19 eucharistic procession marking both the feast of Corpus Christi and the 100th anniversary of Our Lady of Peace Parish in Milmont Park. (Sarah Webb)

The Eucharist is “the one constant” on the journey of life, said Archbishop Nelson Pérez as the Catholic Church in the U.S. looks to renew belief in the Real Presence.

On June 19, the archbishop celebrated the Solemnity of the Most Holy Body and Blood of Christ (Corpus Christi) with some 300 parishioners of Our Lady of Peace (OLP) Parish in Milmont Park. The liturgy marked the parish’s 100th anniversary and the feast itself opened the National Eucharistic Revival, a three-year initiative of the U.S. Catholic bishops.

Launched to rekindle waning devotion to the Eucharist, the revival – featuring an array of resources available at phillyeucharisticrevival.org – will be coordinated during the local diocesan phase by (June 19, 2022 – June 11, 2023) by Father Joseph Shenosky, pastor of Sacred Heart Parish in Oxford.

OLP’s parish milestone underscored that critical focus on the Eucharist, said Archbishop Pérez in his homily.

While “people change, and come and go,” Christ remains in his “body, blood, soul and divinity” hidden in the form of the consecrated bread and wine, the archbishop said.

That sustenance is vital for faithful, who are “on the way to eternity,” while “working out their salvation at the altar,” he said.

Following the Mass, the archbishop led a one-mile eucharistic procession from the parish to Notre Dame de Lourdes in Swarthmore, which merged with Our Lady of Peace in 2014. Dozens followed on foot behind the archbishop, who knelt before the monstrance in the bed of a white pickup truck fitted and decorated for the occasion.

As it slowly wound through the neighborhood streets, the procession was greeted by faithful lining the route, with many kneeling on their lawns.

Some were visibly moved, among them OLP parishioner Eileen Eskuchen, who said the sight of the Eucharist traveling through the quiet, tree-lined streets gave her “the chills.”

Eskuchen, a Mass attendee at the Notre Dame worship site, was eager to record the procession on her cell phone for family and friends.

“When I receive (the Eucharist), I feel a part of Christ is with me,” she said. “He’s listening to all my prayers. He’s right there on my shoulder, helping me.”

The OLP procession was one of several throughout the archdiocese that day, with Auxiliary Bishop Timothy Senior leading a similar one from the Cathedral Basilica of SS. Peter and Paul, where he celebrated an 11 a.m. Mass, to St. Patrick Parish near Rittenhouse Square. 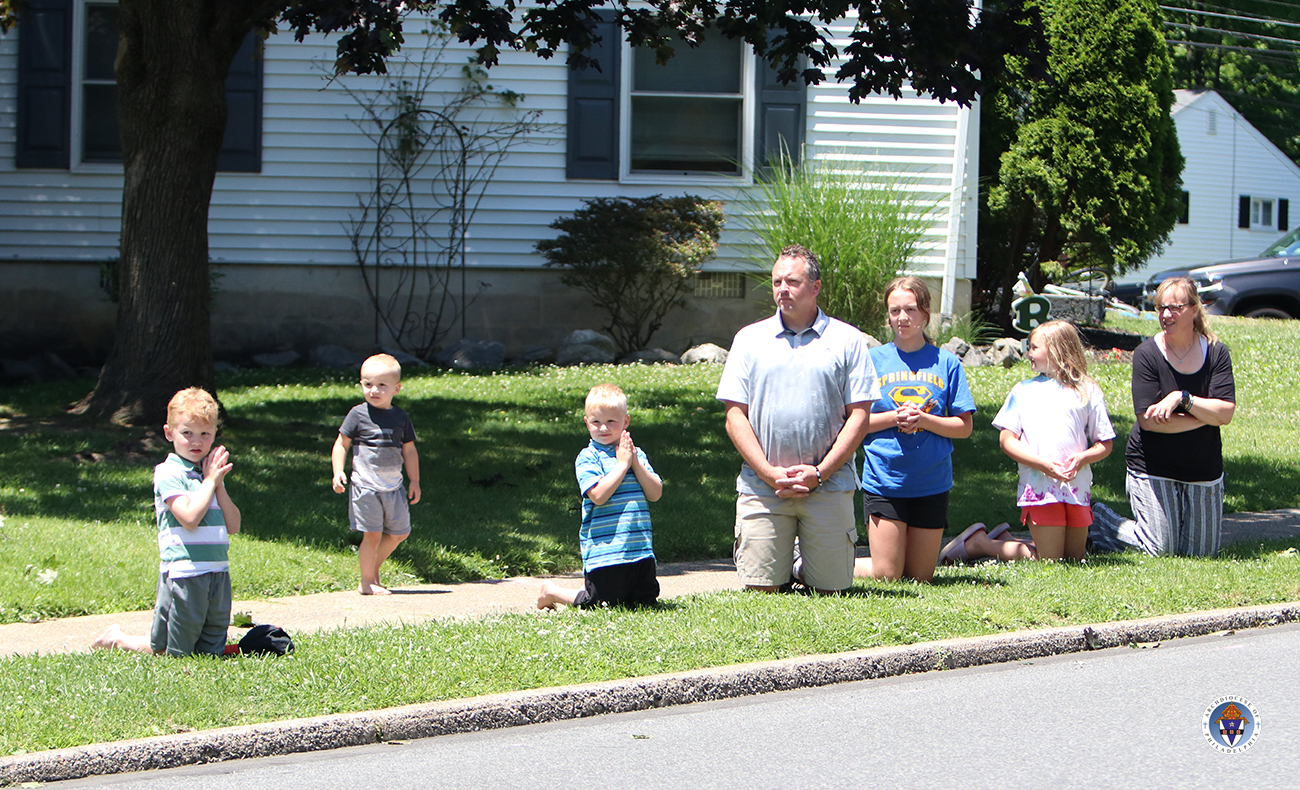 A family kneels as a June 19 eucharistic procession led by Archbishop Nelson Pérez makes its way from Our Lady of Peace Parish in Milmont Park to the Notre Dame de Lourdes worship site in Swarthmore. (Sarah Webb)

Cathedral rector Father Dennis Gill called the procession a “manifestation of faith” that he hoped would, along with the Mass, “compel Catholics everywhere to deepen their eucharistic faith.”

“We need perhaps more than ever this Eucharistic Revival to awaken a more faithful living out of the Gospel, which begins with the graces that come from participation in Sunday Mass and receiving holy Communion,” he said.

At OLP, the revival has a kind of spiritual coach in St. Pio of Pietrelcina (Padre Pio), whose post-Communion prayer – with its repeated invocation of “stay with me, Lord” – was recited during Benediction at the Notre Dame worship site. A few months ahead of the anniversary year, OLP installed a shrine to the saint, featuring a life-sized statue of the beloved Capuchin priest and stigmatist, who urged faithful to “kneel down … (before) Jesus in the Blessed Sacrament … confide all (their) needs to him … (and) give free rein to (their) heart.”

Catholics are poised to “rediscover the Eucharist,” which is “everything,” said longtime OLP parishioner Tom Dillon, adding that reception of the sacrament gives him a sense of “serenity, peace and God’s true love.”

Despite the rise in “nones,” or non-religiously affiliated persons, the Eucharist speaks powerfully to younger generations, said Will Murley and Josh Pisano, members of Mission Youth Philadelphia – a lay ecclesial ministry directed by the Legionaries of Christ order – living in community at the Notre Dame site rectory.

“There is no question in my mind: Jesus is there, he is present,” said Murley. “Veiled in bread, but it’s his Body and Blood.”

“I feel the limitlessness of it all,” said Pisano. “Trying to grasp it, I’m blown away by the immediate power. But still, there’s so much more, and I feel like more recently every time I’ve gone to Mass, I’ve gotten to experience little but more of that.”

OLP pastor Father Joseph Devlin said he hopes the revival “will help more people to recapture their faith in Jesus,” and in the process “bear good fruit for the church.”

Archbishop Pérez reflected that he still remembers his first holy Communion, and now as then, his response to the sacrament remains the same.

“How blessed we are,” he said. 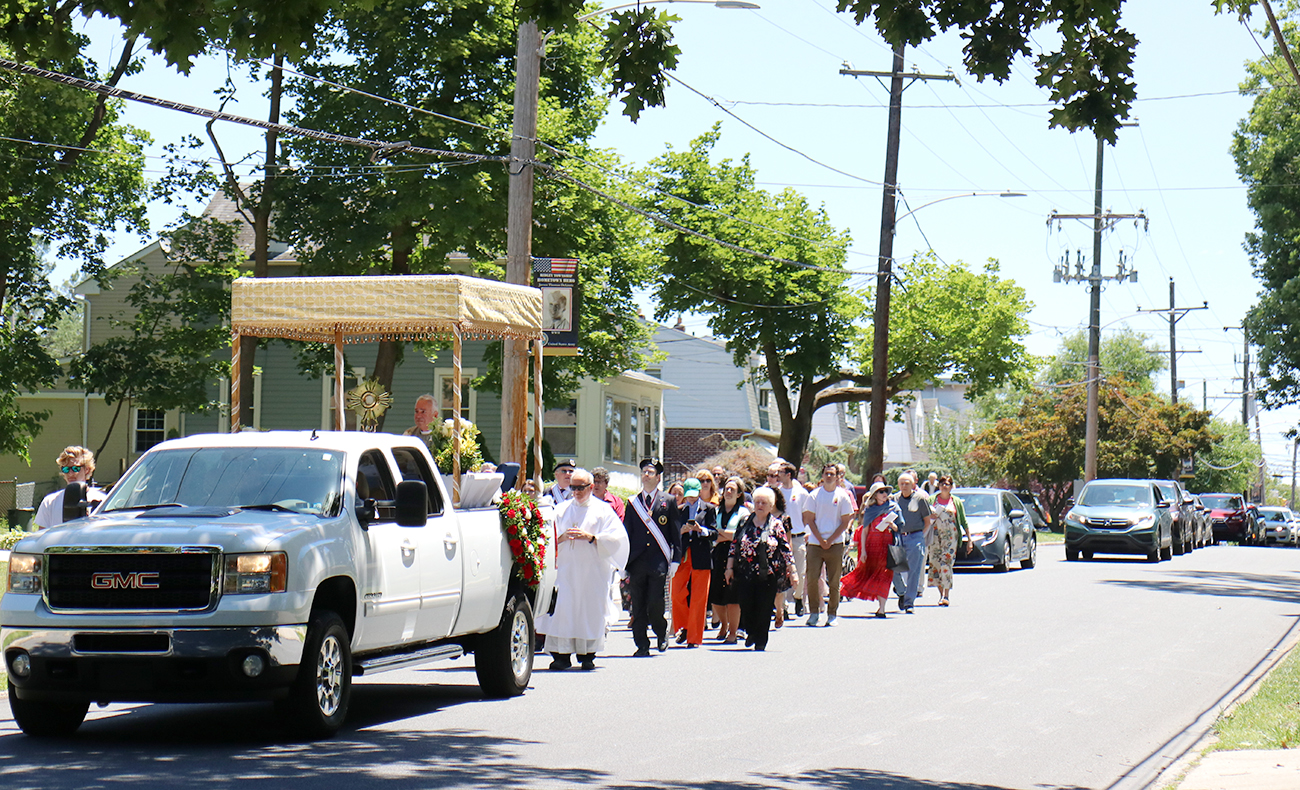 PREVIOUS: New fund ‘bridges the gap’ between local faithful and those in Ukraine

NEXT: Religious education reshaped by ‘learning to walk together,’ says new director