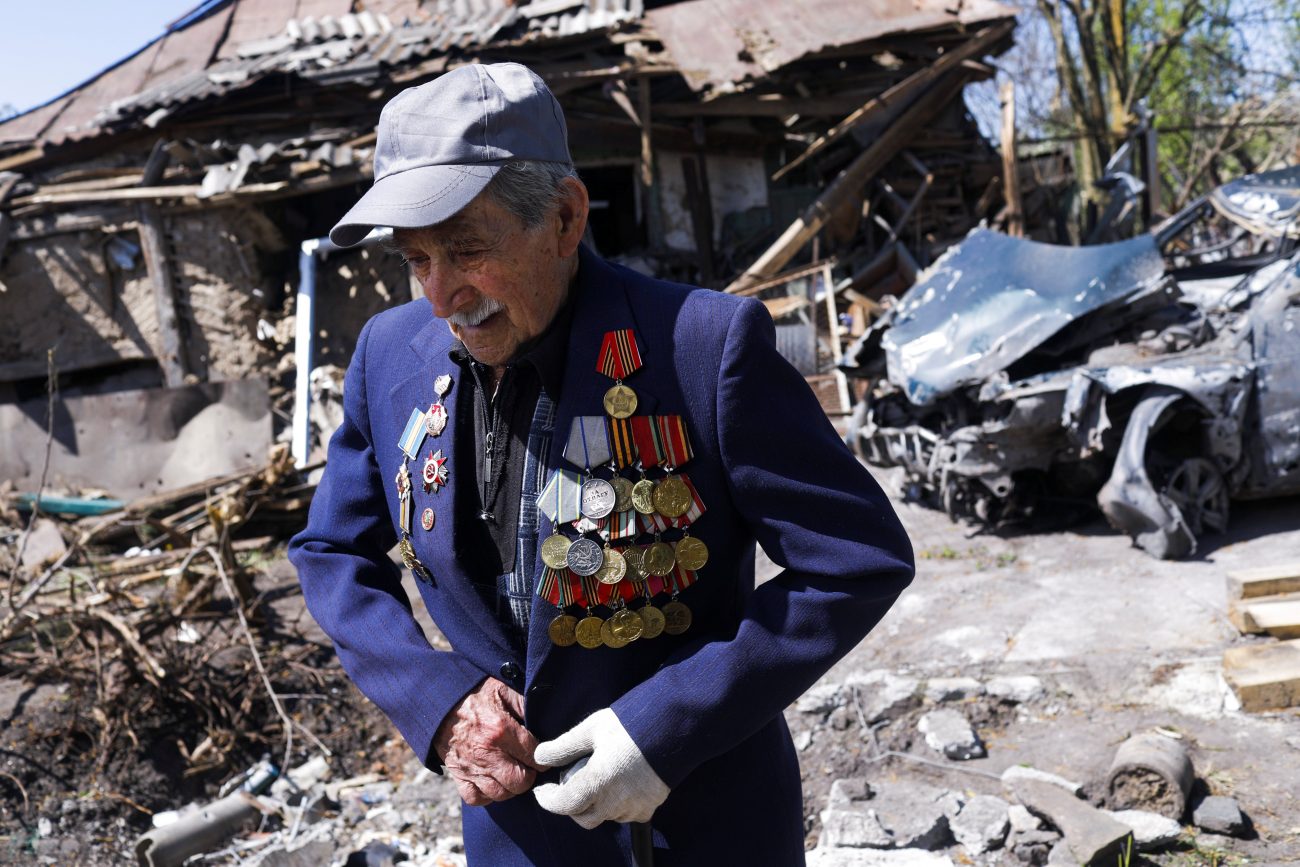 War World II veteran Ivan Lisun, 97, who was left homeless after Russian airstrikes destroyed his home, wears a jacket with his medals and pins outside his home in Zolochiv, Ukraine, May 6, 2022. The senselessness of war produces tremendous poverty, and its violence strikes those who are defenseless and vulnerable, Pope Francis said in message for the World Day of the Poor, which will be marked Nov. 13, 2022. (CNS photo/Ricardo Moraes, Reuters)

A new initiative is helping to “bridge the gap” between local faithful and those in Ukraine, now in now in the fourth month of a brutal invasion by Russia, said organizers.

The “Building the Church Universal Fund” has so far provided $50,000 to the Patriarchal Curia of the Ukrainian Greek Catholic Church (UGCC) in Kyiv.

Managed by the nonprofit Catholic Foundation of Greater Philadelphia (CFGP), the effort shows “we are resolute in aiding our sisters and brothers in Christ as they navigate these difficult times,” said CFGP president and CEO Sarah Hanley. “We pray that our efforts … ease their burden in some small measure.”

The aid is critically needed by the UGCC, which is building both infrastructure and capacity for humanitarian aid in church facilities.

Among those sites is the UGCC’s mother church, the Patriarchal Cathedral of the Resurrection of Christ in Kyiv, the basement of which has served as a bomb shelter amid the shelling.

Father Volodymyr Malchyn, vice chancellor for the curia of the Major Archeparchy of Kyiv-Halych, said he was “deeply grateful for the generous support” of the UGCC “in these trying times.”

Houses of worship for a number of faiths have been among the many civilian targets of Russian fire, with some 60 religious buildings damaged or destroyed as of April, according to Ukrainian officials.

In early March, Archbishop Sviatoslav Shevchuk of Kyiv-Halych, major archbishop of the Byzantine Catholic church, implored all Christians to pray for the protection of the Cathedral of St. Sophia in Kyiv, sacred to both Orthodox and Ukrainian Catholics and a UNESCO World Heritage site.

The Organization for Security and Cooperation in Europe (OSCE) and the Council of Europe issued a joint statement April 13 calling on Russia to “stop the destruction of religious sites and places of worship, which, together with the indiscriminate killing of tens of thousands of civilians, constitute crimes against humanity.”

A May 26 report released by the New Lines Institute for Strategy and Policy and the Raoul Wallenberg Center for Human Rights concluded that Russia has breached the 1948 Genocide Convention, “triggering States’ duty to prevent” genocide under Article I of that document, said the authors. Both the Russian Federation and the United States are signatories of the convention.

To support the “Building the Church Fund,” which directs 100% of its donations to the UGCC Patriarchal Curia, visit thecfgp.org/donate/building-church-universal-fund.

NEXT: Eucharist is ‘the one constant’ on journey of life, says archbishop