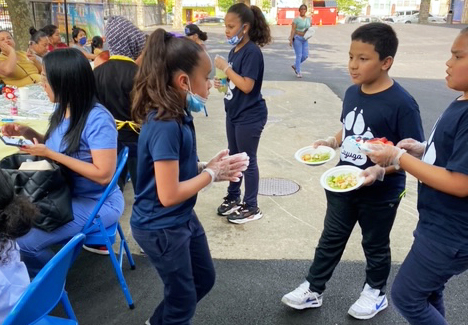 Kids at Catholic Social Services' Cayuga Out of School Time program serve their families a homecooked dinner as part of a creative project, June 10. (Kamal Bostic-Smith)

Kids at an archdiocesan afterschool program in North Philadelphia recently treated their parents to a restaurant experience – right on the playground.

Spiced turkey tacos, slow-cooked meatballs, iced romaine lettuce and fruit with chilled ambrosia dip were all on the menu at a June 10 dinner hosted by 33 children from the Out of School Time (OST) program of Catholic Social Services (CSS).

The invitation-only meal (topped off with cookies a la mode) was served at Cayuga Elementary School, one of eight OST sites operated by CSS to provide children and teens with year-round academic, recreational and social support.

Funded by a blend of public and private partnerships, OST programs offer S.T.E.A.M. (science, technology, engineering, arts and mathematics) education, physical activity and family engagement, with sessions every weekday from 3 p.m. to 6 p.m.

He said the undertaking was an eye-opener for him – literally.

“I wake up and get these random ideas in the middle of the night,” he laughed.

In this case, he was inspired to create four clubs – arts and crafts, cooking, fashion and photography – that would enable kids to ultimately combine their talents for a single show-stopping event. 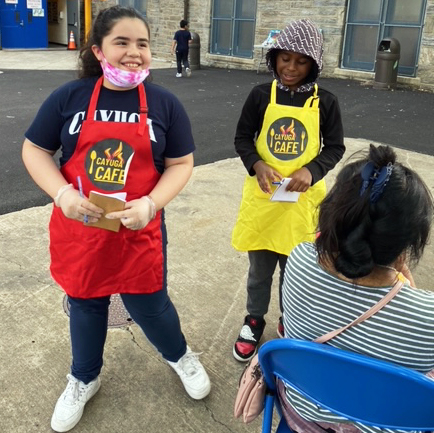 Students at the Cayuga Out of School Time program designed their own aprons for the June 10 dinner they served their families. (Kamal Bostic-Smith)

“The fashion club made aprons for serving, and the photography club took pictures that we framed and put around the dining area,” said Bostic-Smith. “The arts and crafts club made the centerpieces, which parents took home at the end – salt and pepper shakers, emptied and filled with tin stems and buttons made into flowers.”

Meanwhile, the kids in the cooking club “learned meal preparation, cutlery skills – using safe plastic cutlery – and how to use an oven,” said Bostic-Smith.

They also had a “dress rehearsal” for the actual dinner, he added.

“Every dish they served, they had already made,” said Bostic-Smith. “I said, ‘We can’t have you guys trying to figure out meatballs and tacos on the night of the event.’”

With the kids filling plates and serving tables, parents enjoyed their food to the sound of jazz music, streamed over a Bluetooth speaker.

Bostic-Smith said he hopes the project is one the kids will remember.

“It’s a life experience they can take away and talk about forever,” he said. “That thought I had in the middle of the night transferred into them doing the work, and following through with the dream.”