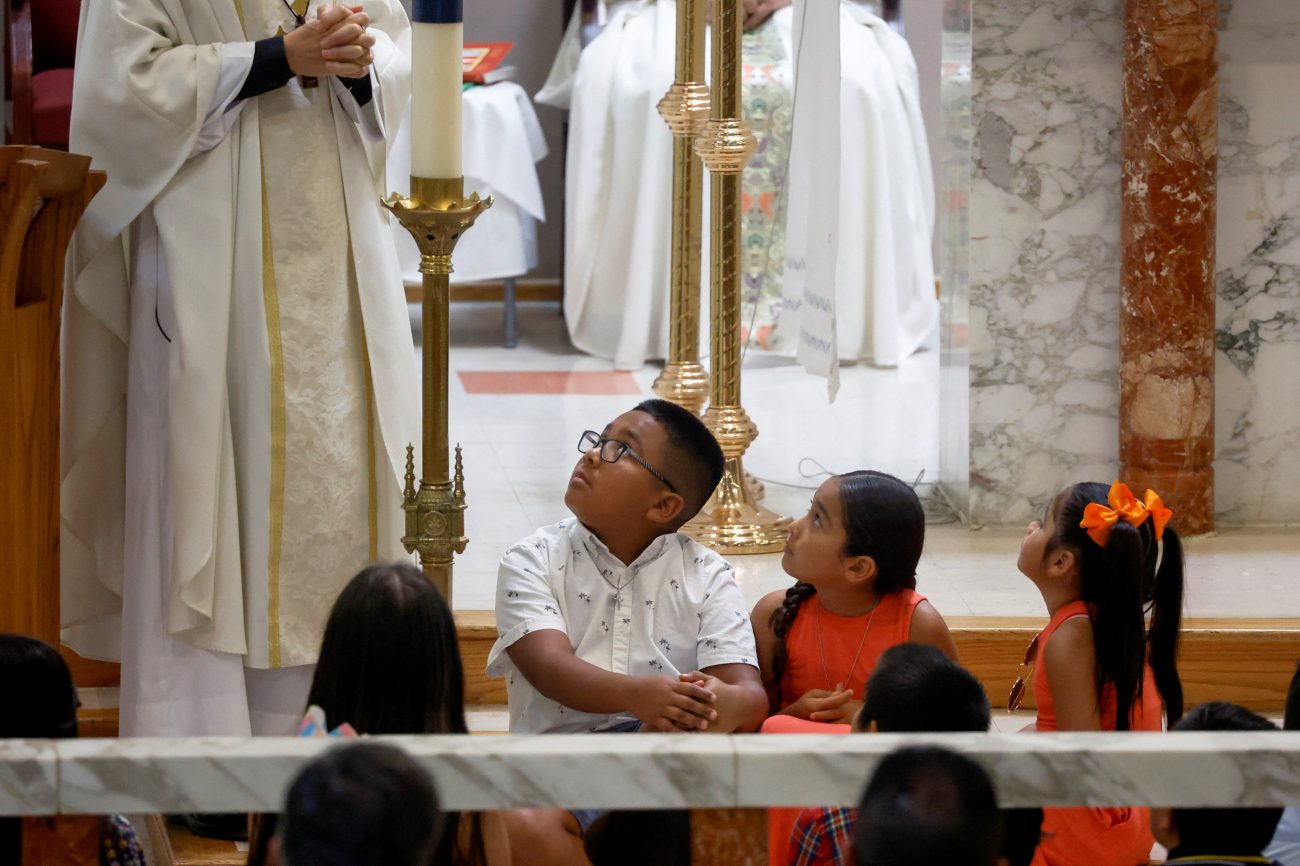 Children in Uvalde, Texas, listen to a priest's sermon during Mass at Sacred Heart Catholic Church May 29, 2022, after President Joe Biden and first lady Jill Biden paid their respects at a memorial at Robb Elementary School. A gunman killed 19 children and two teachers at the school May 24. (CNS photo/Jonathan Ernst, Reuters)

WASHINGTON (CNS) — It feels as if there are no silver linings in the cloud of lingering grief and horror that surrounds Uvalde, Texas, as the city began May 31 to bury the first of 19 children and their two teachers killed a week earlier during a mass shooting at Robb Elementary School.

The killings have produced what will be almost two dozen wakes, funeral Masses or church services, and burials over the upcoming two weeks in the small city of 15,000.

But even in the grief and pain, Archbishop Gustavo García-Siller of San Antonio, who has tended to those grieving in Uvalde, said in his May 29 homily that he’s witnessed a lot of “goodness in people, in the midst of suffering and loss.”

And it is toward Jesus, his life and death, that all must look for comfort and guidance in this time of trial, the archbishop said.

“After he rises from the dead, Jesus does not return to take revenge on those who murdered or abandoned him. His first greeting to his disciples is: ‘Peace be with you,'” he said.

And if there’s a place that needs peace, it’s Uvalde, where questions, as well as indignation, linger about efforts made or not made to stop the shooter.

Some in a large group that gathered at a memorial that’s been created for Uvalde’s victims booed Texas Gov. Greg Abbott May 29 when he visited.

“We need change,” someone shouted at him.

President Joe Biden and first lady Jill Biden also visited the same day and went to Mass at Sacred Heart Church, later meeting for three hours with the families of the dead.

“Do something!” someone in a crowd shouted at the president.

“It’s OK to be angry. But that anger can’t turn into hate,” the local pastor, Father Eduardo Morales, has been urging the local community during Mass.

Anger has spilled outside the borders of Uvalde over the issue of guns, particularly whether anyone should have access to weapons with a high capacity to kill, like the one that killed so many children in a short period of time.

“I thought that what happened here would change the world,” Msgr. Robert Weiss, pastor of St. Rose of Lima Parish in Newtown, Connecticut, wrote to Father Morales in a letter dated May 27.

In 2012, Newtown experienced grief and horror of its own when 20 children between 6 and 7 were fatally shot, also with high-powered weapons, along with six adults following a mass shooting at Sandy Hook Elementary.

“Evil is permeating our country and violence has become an everyday part of our lives, even in what we thought were the safest of places,” Msgr. Weiss continued in the letter. “Our country has had 10 years to make a change, but the situation has only worsened and now you are the victims because that change never happened.”

In Dubuque, Iowa, Archbishop Michael O. Jackels said May 25 that while some Catholics “readily identify things like abortion and capital punishment as life issues,” protecting the earth, making food, water, shelter, education and health care accessible, as well as defense against gun violence, “these are life issues too.”

And perhaps those wanting to “repair the scandal” of some Catholic politicians who support abortion by withholding the Eucharist, should also think whether it’s OK to do the same for “Catholics being indifferent or opposed to all those other life issues, they would have to be denied holy Communion as well,” he said, adding that in either case, it’s a “misguided response.”

“You’ve got to wonder about reasons for refusing reasonable limits on gun ownership which are inspired by the common good and offering protection from harm,” Archbishop Jackels said.

Archbishop García-Siller asked all to pray and embrace the families of those who have lost loved ones.

“And we embrace the families as a mother her children. We cry like a mother does! Our children have been taken away! The pain of families in Uvalde is our own,” he said in his homily.

He urged all to keep focused Jesus and his message.

“Thanks to him we are a people of life. He allows us to deeply embrace the pain as we go through it and enables us to comfort with hope those who mourn. He strengthens us in times of trial,” he said. 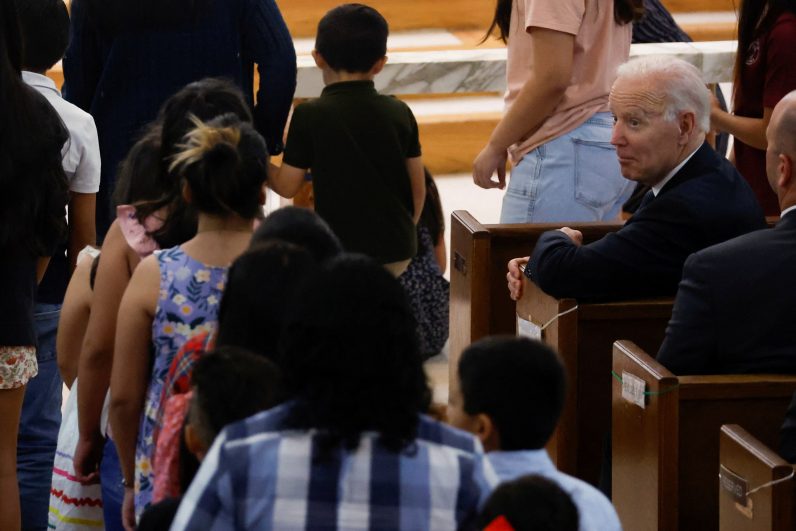 NEXT: Healing of the Eucharist is needed to repair scandal, says Iowa archbishop