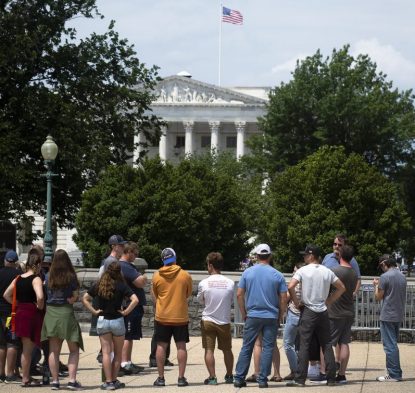 People are seen near the U.S. Capitol in Washington June 7, 2022. (CNS photo/Tyler Orsburn)

“I am deeply grateful that members of Congress have undertaken bipartisan negotiations to address the plague of gun violence in our nation,” said Archbishop Paul S. Coakley of Oklahoma City, chairman of the U.S. Conference of Catholic Bishops’ Committee on Domestic Justice and Human Development.

“I encourage Congress to continue these important efforts which will help build a culture of life. It is imperative this Congress passes into law new protections for the American people,” he said.

Archbishop Coakley made the remarks in response to a June 12 announcement by 20 senators who said they had reached agreement on a package of safety and gun-related measures narrowly focused on preventing future shootings similar to the one in Uvalde, Texas, where an 18-year-old gunman fatally shot 19 students and two teachers May 24.

The senators’ proposal, which was not yet written into bill form, calls for funding to encourage states to pass and implement so-called “red flag” laws to take guns away from potentially dangerous people; funding for school safety and mental health resources; expanded background checks for gun purchases for people between ages 18 and 21; and penalties for illegal straw purchases by convicted criminals.

The senators’ “willingness to engage in dialogue and commitment to the common good” illustrates “the ‘better kind of politics’ that Pope Francis champions” in “Fratelli Tutti,” Archbishop Coakley said, quoting from the pope’s 2020 encyclical: “For when the good of others is at stake, good intentions are not enough. Concrete efforts must be made to bring about whatever they and their nations need for the sake of their development.”

The USCCB has consistently called for laws to address gun violence.

In a Nov. 11, 2019, presentation titled “Responses to the Plague of Gun Violence” that he gave during the U.S. bishops’ fall general assembly, Bishop Frank J. Dewane of Venice, Florida, then the bishops’ domestic policy committee chairman, spelled out the bishops’ support for a ban on assault weapons, universal background checks and a federal gun trafficking bill.

They also backed, he said, regulations on sales of handguns, improved mental health interventions, safety measures and “an honest assessment of violent images and experiences in our society.”